FIFA launched an investigation after racist abuse was aimed at Raheem Sterling and Jude Bellingham during England's 4-0 win over Hungary in Budapest; This article contains language and content that users may find offensive or upsetting

Hungary have been fined £158,416 and ordered to play behind closed doors after England players were subjected to racist behaviour in a World Cup Qualifier earlier this month.

FIFA launched an investigation after monkey chants were aimed at Raheem Sterling and Jude Bellingham during England's 4-0 win over Hungary in Budapest.

Football's world governing body decided on a two-match stadium ban at home for Hungarian spectators in FIFA competitions, with the second match suspended for a probationary period of two years. 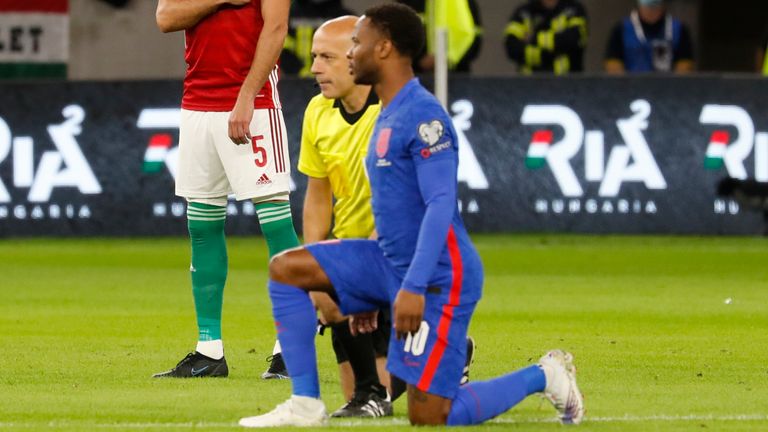 Kick It Out chief executive Tony Burnett says the fine and two match stadium ban given to Hungary for the racial abuse directed towards England players in Budapest is unacceptable and a cultural change is needed.

With the game played under FIFA jurisdiction, a full-capacity crowd of 60,000 were present at the stadium, despite Hungary having been ordered to play their next three UEFA competition matches behind closed doors - with one of those games suspended for two years - following racist abuse from supporters and homophobic banners in the stands during their Euro 2020 group stage matches in Budapest.

Reporting from inside the Puskas Arena on September 2, Sky Sports News' Rob Dorsett confirmed he heard "sporadic monkey chants from various areas of the crowd, directed primarily towards Raheem Sterling when he has touched the ball - and including when he set up Harry Kane for the second goal.

"I have seen four separate individuals specifically involved in the racist chanting. The most recent of those was directed at Jude Bellingham, as he warmed up right in front of us, and close to the Hungarian ultras." 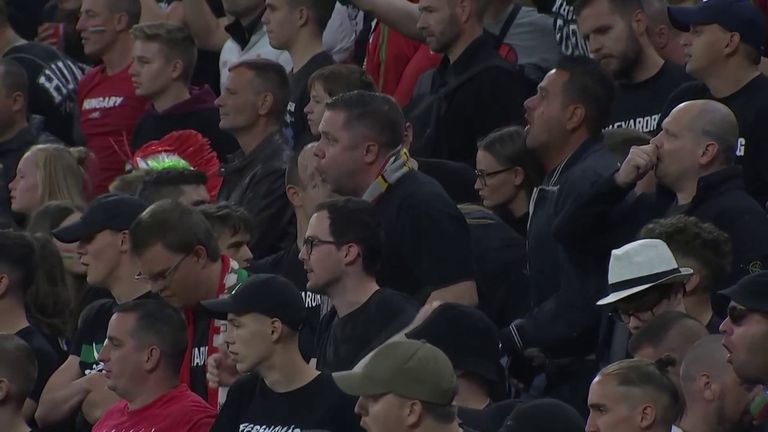 Raheem Sterling was racially abused by a Hungarian fan during England's 4-0 win in Budapest. Warning: This footage contains a racist gesture

The Football Association subsequently called on FIFA to investigate the chants, while England's players were also booed by fans when taking a knee prior to kick-off.

FIFA also handed the Hungarian Football Federation a "substantial" fine of 200,000 Swiss francs (£158,416) due to the seriousness of the incidents - racist words and actions, throwing of objects, lighting of fireworks, blocked stairways.

FIFA's statement read: "The FIFA Disciplinary Committee has imposed a ban and a substantial fine on the Hungarian Football Federation (MLSZ) in relation to the racist behaviour of numerous supporters during the FIFA World Cup Qatar 2022 qualifying match between Hungary and England on 2 September 2021. 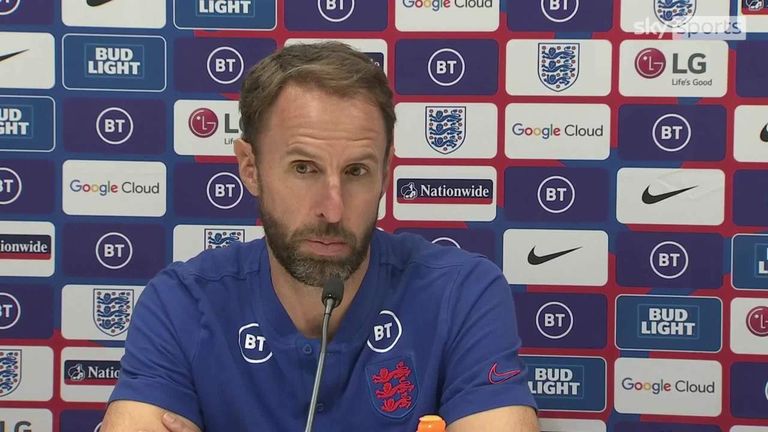 Gareth Southgate says it's 'disappointing' that incidents of racial abuse continue to occur, but they must keep fighting to stamp out racism

"After analysing and taking into consideration all the circumstances of the case, specifically the seriousness of the incidents (racist words and actions, throwing of objects, lighting of fireworks, blocked stairways), the Committee decided that the MLSZ would play its next two home matches in FIFA competitions without spectators, the second match being suspended for a probationary period of two years. 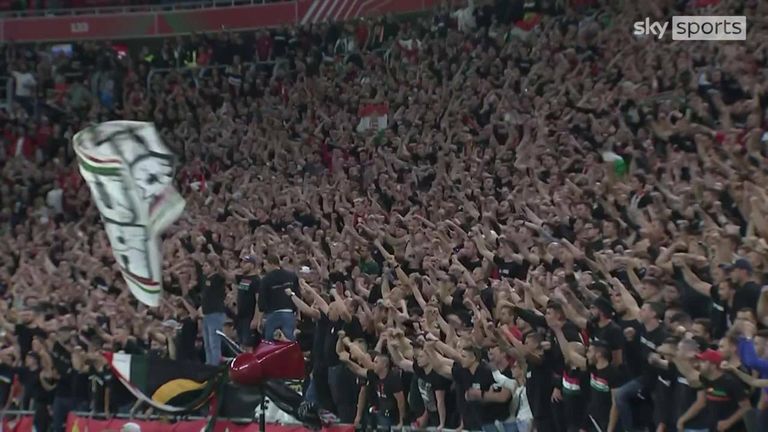 England players were subjected to incidents of overt racism from some Hungary fans during their 4-0 World Cup qualifying win in Budapest, as Rob Dorsett reports from the Puskas Arena

"FIFA's position remains firm and resolute in rejecting any form of racism and violence as well as any other form of discrimination or abuse. FIFA takes a clear zero tolerance stance against such abhorrent behaviour in football.

"The decision rendered by the FIFA Disciplinary Committee was notified to the MLSZ."

The England players had been loudly heckled at kick-off when they took a knee.

The squad had discussed the issue in the build-up to the game, and were made aware of the fact that the Republic of Ireland players were loudly booed in June when they took a knee before their friendly with Hungary in the nearby Szusza Ferenc Stadion.

Loud boos and jeers were clearly audible as England's players made the gesture, which draws attention to the fight against racial inequality in the game and society.

The England players were also pelted with cups thrown from the crowd after Sterling had opened the scoring in Budapest.

A flare was then thrown onto the pitch following Harry Maguire's goal to put England 3-0 ahead.

England's players were booed earlier this summer by some of their own supporters when they took a knee for their Euro 2020 warm-up games and again by small sections of the crowd in their Euro 2020 opener against Croatia.

Players taking a knee have also been booed at some club matches since the domestic season started.