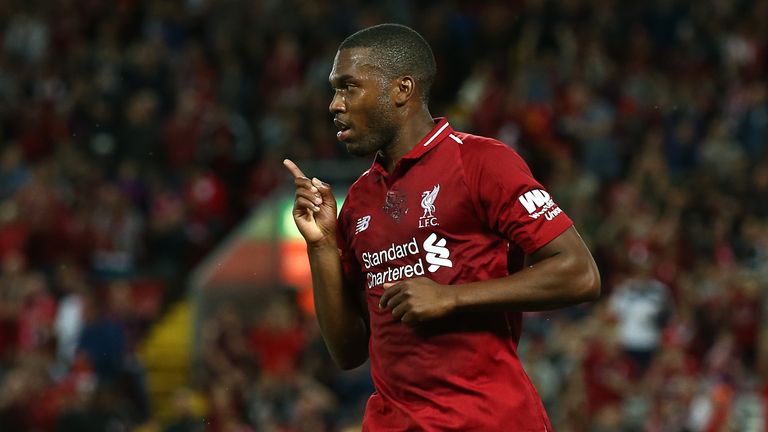 Should Liverpool forward Daniel Sturridge get an England recall when Gareth Southgate names his next squad on Thursday? The Sunday Supplement panel discuss...

Sturridge came off the bench to score a stunning late equaliser at Chelsea to ensure Liverpool's unbeaten start to the league season continued.

The goal was Sturridge's fourth of the season for Jurgen Klopp's side and has led to talk of a potential England recall, almost 12 months on from his last international appearance.

"He's got four goals already this season and he only managed three last year," The Guardian's Dominic Fifield said of Sturridge.

"I don't think he's in a place yet where he can play 90 minutes so if Gareth Southgate is thinking about who he is going to pick at a tournament and he's thinking that far ahead, then maybe he doesn't go with a 29-year-old whose body has let him down too much in the recent past.

"However, if he's looking at the Nations League games specifically next month and he thinks Harry Kane is going to start both of those games against Croatia and Spain, and yet he might need to throw someone late on to nick a goal.

"Sturridge is your man because he can come on for 15 minutes and he could have that impact like he did against Chelsea. We all know he's got the pedigree for it, it's just whether his body is up to it."

Sturridge's chances of adding to his 26 England caps have been improved by Jamie Vardy's decision to step away from international football, leaving a gap in the squad for another back-up option to Harry Kane.

The former Manchester City and Chelsea frontman has already shown his ability to influence matches when coming off the bench for England, most notably in Euro 2016 when he scored a last-minute winner against Wales.

"There's vacuum that's been created by Vardy in that there's no-one senior enough that you can trust to come on and make a difference," Matt Dunn of the Daily Express said.

"Sturridge fits that bill and it all depends on how seriously Southgate takes the competitive nature of the Nations League because I think there is a worry that if we do badly in Croatia especially, we could end up bottom of a difficult three-team group and our seedings get affected for future competitions."

Fifield added: "England don't have an awful lot of options at centre-forward. Now that Jamie Vardy is not there are you looking at someone like a Dominic Calvert-Lewin coming in, who won't have the same goal scoring pedigree as Daniel Sturridge has got. If you just want someone to come on and have a cameo and maybe turn a game for you, then go with Sturridge."