Match report as England draw 3-3 with Germany in Nations League in final match before World Cup in Qatar; Three Lions were 2-0 down after Harry Maguire mistakes but goals from Luke Shaw, Mason Mount and a Harry Kane penalty turned it around until Kai Havertz capitalised on Nick Pope spill

England were on their knees and then on the brink of a transformative comeback win before a bad Nick Pope error late on ensured their final game before the World Cup ended 3-3 against Germany.

It was looking bleak for the confidence-hit hosts when Harry Maguire errors had led to an Ilkay Gundogan converted penalty and Kai Havertz beauty but somehow from 2-0 down England fought back with a four-minute double from the impressive Luke Shaw and Mason Mount.

Harry Kane's fierce penalty then made it 3-2 as England ended their goal drought in style. Wembley was rocking and believing again - but that atmosphere was suddenly silenced when Pope spilled Serge Gnabry's shot for Havertz to tap in his second and equalise.

Southgate's side were already relegated from Nations League Group A3 and they have now failed to win for six games in a row for the first time in 29 years - but that fightback will at least send supporters away from the national stadium feeling there is still potential to unlock in this group of players, if they can find form and belief before their World Cup kicks off against Iran on November 21.

England had produced an improved first-half performance compared with their efforts in Italy on Friday night but there was still a clear air of nervousness both on the pitch and among an unusually quiet home crowd at Wembley.

Amid the good tackles in midfield and quick counter-attacks there were mis-placed passes, poor touches and snatched finishes at the end of encouraging moves, with Kane unable to find Phil Foden with an early cross and Sterling firing at Marc-Andre ter Stegen from England's best move, before escaping unpunished from penalty appeals when he tugged Thilo Kehrer's shirt at the other end.

The home side grew in confidence on the front foot, though, with Kane dipping a volley just wide, Maguire - booed pre-match and then chanted for - heading onto the roof of the net and Sterling testing Ter Stegen either side of the break.

But Maguire's moments to forget in the second half handed the initiative to a Germany side who until that point had been held on the edge of the England area.

First, the centre-back gave away possession and gave away a penalty. His pass straight to the talented former England U21 Jamal Musiala was ugly; his swipe after the German's stepovers was worse. With VAR in operation, the initial oversight by referee Danny Makkelie was always going to be corrected.

Gundogan found the side-netting with the spot-kick and a fourth defeat in six games was suddenly hanging over England. That seemed a certainty when Maguire was caught on the ball up-field and Germany broke away for Havertz to curl home unmarked from 25 yards.

England's confidence looked in tatters - yet somehow they struck back. Reece James' cross found Shaw at the back post and the left wing-back - dropped by Manchester United but back near his best on Monday - squeezed his shot through Ter Stegen's legs.

Luke Shaw’s second half strike ended the Three Lions’ run of 520 minutes without a non-penalty goal in all competitions.

Moments later, England were level. Subs combined as a fine piece of play from Bukayo Saka found Mount to sweep in a super finish from distance, sending Wembley wild.

Suddenly all the momentum was with the hosts, with a Kane shot deflected into the side-netting celebrated by some before the majority of the 90,000 roared when he converted from 12 yards after a studs-to-shin tackle from Nico Schlotterbeck on Jude Bellingham was reviewed by VAR.

Finally England were about to win a football match; finally they'd found a launchpad for Qatar. So it seemed. But Gnabry's hit with three minutes to play was too hot for Pope and Havertz dampened the night for England supporters.

On a night when a result was required for under-pressure Southgate and his England team perhaps instead it was the spirit of the second half response which will prove to be most important for this group and how their hopes heading to Qatar are perceived.

The night had begun in solemn fashion, with an impeccably-observed period of silence for Queen Elizabeth II following a first Wembley rendition of God Save The King.

Southgate: Tough period will benefit us in long term

England manager Gareth Southgate: "As a group they've come together this week. It's been a tough period for them and they've grown. You are always going to be exposed to pressure, we're going to a World Cup. We played a friendly here in March where Ivory Coast went down to 10 men and it became a non-event. We learnt nothing. But this week, we've learnt a huge amount. They've had to step forward and as a group come together. It's going to benefit us in the long term.

"A couple of errors have cost us the goals but I'm focused on the fact we played with tremendous spirit and belief that we haven't shown in the last few games. The crowd could see that. And they rose to it.

"We started the game a bit tentatively and you could feel it was a night where the crowd were with us but wondering how it would play out. We were not aggressive enough with our pressing - against a team technically very good. We kept going backwards and weren't as positive. But we had the best chances, great counter-attack moments and should have been ahead at half-time.

"All the goals we conceded were avoidable. At 2-0 we were looking into a difficult moment. Players have collectively talked as a group, on their own, with us. The whole experience is one we've needed to grow as a team. You're going to have pressure in the World Cup. It's coming. Better we feel it and learn how to deal with it.

"The players reacted in the right way. We showed some character but also a lot of quality in chances we created throughout the game and also goals we scored. The crowd stayed with the team, even at 0-2, and that was so important for us. We score, the roof goes off, we remember what it feels like to watch a goal go in... then we had a punch on the nose at the end." 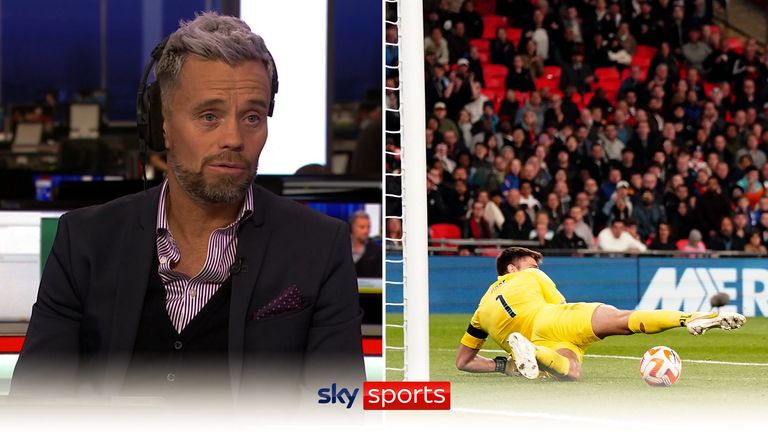 Flick rues mistakes at 2-0 up

Germany manager Hansi Flick: "I'm very disappointed. After the 2-0 we were quite stable then had some individual mistakes. England brought on two very good players who made them better offensively and they were quite good in that period. But we came back in an away game in England at 3-2 - I told my team that's great courage and we never gave up so it was really good to come back."

When Group A3 was drawn, Hungary quickly appeared to be the favourites to finish bottom of this highly competitive group, but after some impressive results they needed just a point at home against Italy to make next summer's finals.

However, with Italy starting the night just two points behind thanks to their 1-0 victory against England in the San Siro, the European champions won 2-0 in Budapest to top the group and qualify for next summer's finals.

In Group B3, Bosnia and Herzegovina had already ensured promotion to League A but relegation was still undecided. Finland's 2-0 win over Montenegro on Monday saw Romania demoted to League C despite their impressive 4-1 victory over the group winners.

Promotion and relegation from Group C4 were both decided on Friday afternoon as Georgia sealed promotion and Gibraltar were relegated. The group was completed on Monday evening as Georgia beat Gibraltar 2-1 and Bulgaria defeated North Macedonia 1-0.

The next competitive games for both England and Germany will be at this winter's World Cup.

England face Iran in their opening World Cup group game on November 21 at the Khalifa International Stadium in Doha - the same venue where Germany begin their Qatar 2022 campaign as they face Japan on November 23.