John McGinn: Best is yet to come from Scotland midfielder, according to Steve Clarke

"John is the man scoring the goals now and hopefully we'll get one or two more that can do that as well," says Scotland boss

Scotland boss Steve Clarke insists the best is yet to come from John McGinn after he scored two goals during their 3-1 win over Kazakhstan.

The Aston Villa midfielder struck twice either side of a Steven Naismith header to ensure Scotland concluded their Euro 2020 qualifying campaign with a victory at Hampden Park on Tuesday night.

The 25-year-old now has seven goals in his last six appearances for the Scots, but Clarke believes he can still become an even better player. 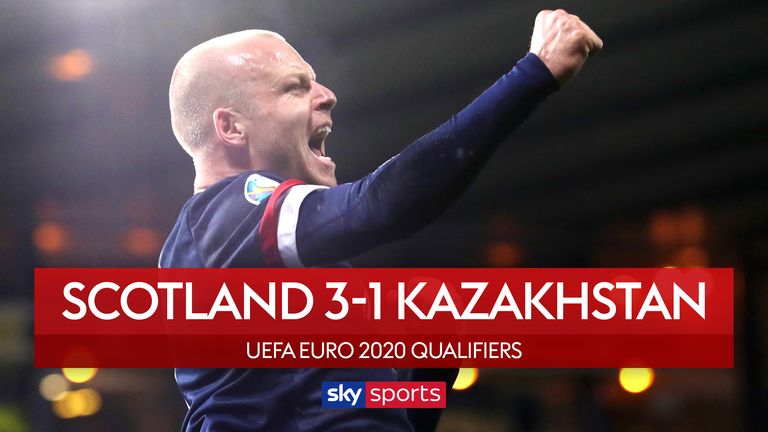 Clarke said: "John is on a fantastic run of form. He has been great for Aston Villa for the last couple of seasons and he is starting to bring it onto the international stage.

"It's very important to remember he is still in the early stages of his international career. The more games you play at this level, the better you become. The more experience you get, the better the team will become.

"You look at someone like Steven Naismith who is a great example to them all. He plays with great experience at this level and it was great to see him get his goal as well.

"When you've got any player in goalscoring form, that's good for any team.

"John is the man scoring the goals now and hopefully we'll get one or two more that can do that as well.

"We've found a good position for John. He's playing it very well, he and Steven Naismith are developing a decent understanding and as well as the goals they give us a good early press and the desire to meet the opposition high up the pitch which helps us as well."

Villa's McGinn, who has three goals and two assists in 12 appearances for Dean Smith's side this term, says he had "never" enjoyed a similar run of goalscoring form but is confident of keeping it going.

He said: "I think that it helps me that Naisy (Naismith) wants to come and link the play and I can feed off the scraps.

"If I can help the team with goals, I am happy to do so. I am in a good run of form with goals and hopefully, I can carry it on.

"I probably could have had a hat-trick tonight.

"That's what the manager said. Being a bit picky maybe but I am getting in the positions and the important thing is the service is coming.

"The win was immensely important.

"We were a squad and nation battered with confidence towards the start of the campaign.

"Slowly but surely we have started to build that confidence and especially in the second half, you see a Scotland team again and one in March we can make the nation proud again."

The Tartan Army finished their European Qualifying campaign with three successive wins - although they have failed to qualify for next summer's finals through the conventional method, they have the chance to get there through the Nations League play-offs.

In Group I, Clarke's side finished third on 15 points after five wins and five defeats after 10 games, nine points behind second-placed Russia.