The side have one win in past 11 games

Martin O'Neill has left his role as Republic of Ireland manager by mutual consent.

Former Celtic and Leicester boss O'Neill has been under pressure in recent weeks after Ireland failed to win a game as they were relegated from Nations League Group B.

O'Neill led Ireland to Euro 2016 in France, where they reached the knockout stages before being eliminated by the hosts, but a run of one win in 11 games since last November has seen the national team endure a difficult 2018.

FAI chief executive John Delaney said: "I would like to thank Martin, Roy, and the management team for the impact that they had with the Ireland team. 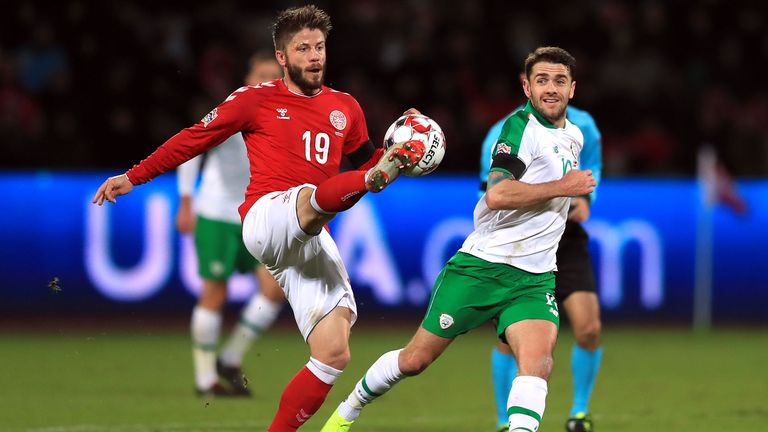 Highlights of the Nations League Group B4 game between Denmark and the Republic of Ireland.

"There have been many highlights during Martin's reign - none more so than Euro 2016 in France, which will live long in the memory of all Irish supporters.

"Martin did a great job guiding the team out of a difficult qualifying group - where we beat world champions Germany along the way - to reach Euro 2016 and advance to the last-16 following a historic victory over Italy in Lille.

"I wish Martin, and the management team, the very best for the future."

O'Neill replaced Giovanni Trapattoni in November 2013 and, as well as leading Ireland to Euro 2016, he also took them to the play-offs for the 2018 World Cup where they were beaten 5-1 by Denmark in November 2017.

That result signalled a downturn in form and results, with a friendly win over the United States in June proving to be Ireland's only victory since those World Cup qualifiers.

The national side have also gone 397 minutes of football without scoring a goal since Aiden O'Brien struck during September's 1-1 friendly draw in Poland.

Monday evening's 0-0 Nations League draw with Denmark in Aarhus, during which the Republic failed to muster a single shot on target, proved to be O'Neill's final match in charge.

The FAI statement said the board would now "meet promptly to discuss the process of recruiting a new manager".