Ralf Rangnick, who most recently managed RB Leipzig, is currently out of work after leaving his role as head of sport and development at Red Bull by mutual consent last year; he is known for influencing modern managers such as Liverpool's Jurgen Klopp and Chelsea head coach Thomas Tuchel

Ralf Rangnick has said he would be interested in becoming Germany's new manager when Joachim Low steps down, after Liverpool boss Jurgen Klopp distanced himself from rumours linking him to the job.

Rangnick, who most recently managed RB Leipzig, is currently out of work after leaving his role as head of sport and development at Red Bull by mutual consent last year.

The 62-year-old has decades of experience - having entered management in the 1980s - and is known for influencing modern managers such as Liverpool boss Klopp and Chelsea head coach Thomas Tuchel.

When asked about the role of German national team boss, Rangnick told Sky Germany: "If I would still be free at that time, of course [I would be interested].

"Anyway, it is a question of respect. Moreover, this is a position that leaves no one cold as a coach in Germany. I would take off and listen to that [phone call from the German FA].

"In general, I can imagine many things. It's a question of timing - at the moment I'm free - but Mr Keller (Fritz Keller, German Football Association president) wants to take his time [to appoint a new manager].

"Now we just have to see what happens over the next few weeks." Low, who took over from Jurgen Klinsmann in 2006, will leave his position as Germany manager after Euro 2020 this summer, ending his contract early after the tournament was pushed back a year.

He guided Germany to 2014 World Cup glory and helped the national side to the semi-finals at Euro 2016.

However, he has been attempting to rebuild the national team since their shock exit at the group stages of the 2018 World Cup in Russia.

Liverpool boss Klopp, meanwhile, has ruled out the possibility of replacing Low this summer. 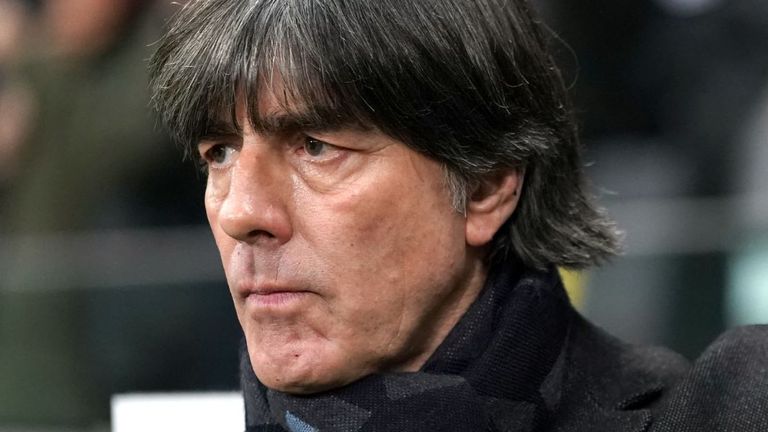 Joachim Low did not get the respect he deserved as Germany manager, says Uli Kohler

Klopp was immediately installed as one of the favourites to replace Low, but the Liverpool manager said: "If I am available for coach of the German national team in the summer? No. After the summer? No.

"I have three years left at Liverpool, that's a simple statement, a simple situation.

"You sign a contract and you normally try to stick to that contract don't you? I had a contract in Mainz where I stuck with them even though there was interest from other Bundesliga teams with more money.

"It is just timing and if it doesn't work out you don't have to lose any sleep over it.

"Jogi Low did an incredible job for so many years. I understand that he wants to have this highlight at the European Championship, try to squeeze everything out that he can in this tournament, and then somebody else will do the job.

"Someone else will do the job and I am pretty sure with the amount of really good German managers at the moment the German FA will find a good solution."