CONMEBOL hit back at Lionel Messi with "lack of respect" claims

Lionel Messi claimed Argentina were treated unfairly at the Copa America and boycotted the medal ceremony to protest the refereeing and "corruption".

The Barcelona forward was dismissed towards the end of the first half of Saturday's third-place play-off in Sao Paulo against Chile following a confrontation with midfielder Gary Medel, who was also shown a red card.

Messi appeared to have been hard done by, with Medel appearing to push his head towards the Argentina playmaker as they squared up, chest to chest.

The Argentina captain suggested he had been singled out following his comments over the "crazy" officiating in the wake of their 2-0 semi-final defeat by hosts Brazil in Belo Horizonte.

"We don't need to be part of the corruption that we've suffered at this tournament," Messi said, as quoted by Spanish media outlet AS.

"Medel is always right at the limit. With a yellow that would have been the end of it for both of us, but well, maybe what I said recently had an impact.

"What's important is that the team finished well in the tournament. Maybe this was ordered and I ended up suffering because of what I said."

When asked about his thoughts on Sunday's final, Messi said: "Hopefully the referees and the VAR won't influence things and they let Peru compete, but I think that's unlikely."

Head coach Lionel Scaloni was also left perplexed by some of the decisions.

"Either the criteria is bad, or they don't agree. It seems to me that they are not yet clear about the VAR system," he said at a press conference.

On the red card for his captain, Scaloni said: "I still don't understand what Messi did to be dismissed."

The South American football confederation, Conmebol, said questioning the integrity of the Copa America is "unacceptable" and that a "fundamental pillar of fair play is to accept the results with loyalty and respect".

Although it does not mention Messi by name, the statement said: "The same goes for refereeing decisions, which are human and will always be improvable.

"It is unacceptable that as a result of incidents typical in competitions, involving 12 teams, all on equal terms, unfounded accusations have been launched that lack the truth and question the integrity of the Copa America.

"These accusations represent a lack of respect for the competition, all the participating players and the hundreds of professionals of CONMEBOL, an institution that since 2016 has been working tirelessly to make transparent, professionalise and develop South American football."

Was Messi unfairly treated? Watch below. 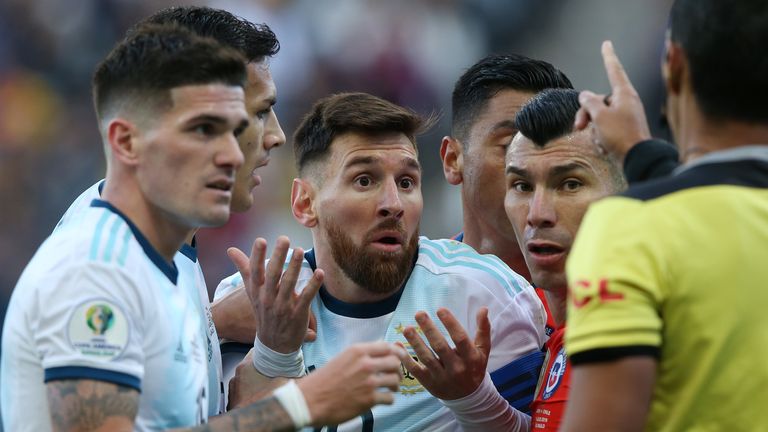