Lampard on semi-final: "I thought this could be the worst night of my footballing life. I’m honestly thinking towards double figures" 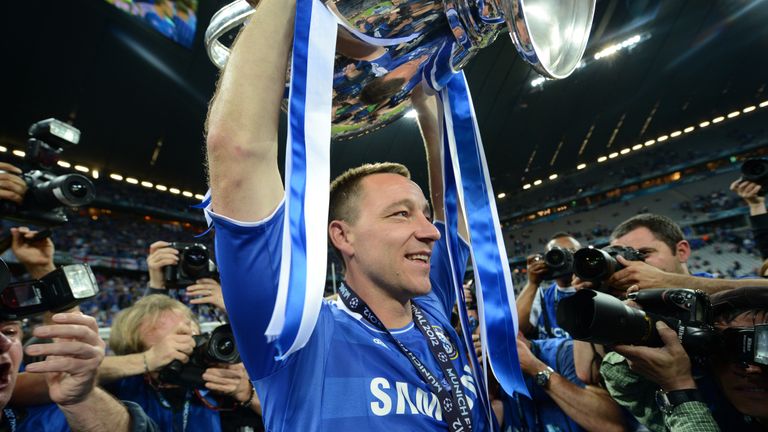 Frank Lampard has defended John Terry’s 2012 Champions League full kit celebrations, saying a man of his stature can wear what he likes!

Eight years on from Chelsea's Champions League victory, Frank Lampard runs through his memory of that famous day in the Munich, and the run-up to the final...

Under Roberto Di Matteo, Chelsea won the Champions League for the first time, defying all the odds along the way in dramatic knockout wins against Napoli and Barcelona, and a final victory over Bayern Munich in their own backyard.

Speaking to Jamie Redknapp on Tuesday's The Football Show, Lampard fondly remembers what was to be the best year in Chelsea's history, as a topsy-turvy few months culminated in triumph...

"You struggle to believe the story," said Lampard. "There were so many sub-plots to what was the best year in Chelsea's history."

In the last 16 first leg, Andre Villas-Boas was under severe pressure with Chelsea struggling domestically, and a 3-1 defeat at Napoli spelled the end for the Portuguese boss...

"It was tough," Lampard said. "Now doing the job that I do, I now understand it would have been tough for the manager.

"Looking back, I was disappointed on the night. You can see why the game went the wrong way for us, it was a tough atmosphere to go into, and we weren't solid, we weren't right."

But in the return leg at Stamford Bridge, Chelsea turned it on under interim manager Di Matteo, winning 3-1 in normal time to take it to extra-time, before Branislav Ivanovic's winner sent Chelsea to the quarter-final.

"One of the great nights at Stamford Bridge. To go in 3-1 down, with the talent they had, and the circumstances of Robbie coming in. He spoke to the players individually and garnered a spirit.

"Big names step up, and we stepped up that night with the help of an amazing crowd."

A Nou Camp miracle - 'I was thinking double figures'

Chelsea then got past Benfica 3-1 on aggregate in the quarter-final, before being drawn against the current champions Barcelona, widely regarded as the best team in world football at the time.

Didier Drogba's goal gave them a 1-0 win in the first leg at Stamford Bridge, but a depleted Chelsea went to the Nou Camp a week later, losing Gary Cahill early through injury and then captain John Terry to a red card.

Barcelona then raced 2-0 ahead, and though Lampard admits he felt at the time it could have gone into double-figures for the hosts, Chelsea formed a stunning comeback, scoring through Ramires just before half-time, before defending deep for 45 minutes and grabbing a second through Fernando Torres.

"When we went 2-0 down, 10 men, with the reshuffle, I thought this could be the worst night of my footballing life. I'm honestly thinking towards double figures. I'd spent the first 20 minutes getting nowhere near Xavi and Iniesta. It's not a joke, it sounds funny, but it's not a joke. I just didn't see it. If we didn't score just before half-time, which changed our feeling.

"I hardly got past my 18-yard box in the second half, we couldn't even get up to people, if you got up to Iniesta he'd just go past you! It was a real dig in scenario. It's easy said now, because we had Bayern at their own ground, but at the same time, when those things happen, in a game you have no right to win, then you do feel it's written in the stars."

Bayern, who had beaten Real Madrid in the semi-final, were favourites to win the final at their own ground, but Chelsea had other plans. Another reshuffled Chelsea side pulled off a miracle.

Going behind late on to Thomas Muller's header, Didier Drogba brilliantly equalised at the death, before Petr Cech's penalty save from Arjen Robben in extra-time. It then went to penalties; Lampard scored his, and Drogba scored the winning spot kick after Bayern had missed twice. Cue "chaos".

"We were aware of being underdogs, and missing huge players. Robbie Di Matteo called us in for a pre-game meeting, and he actually had videos of all our family members sending good luck messages, whether it was our kids, or grans, wives, mothers, we sat there and it was tear after tear, emotion after emotion, and I thought it was amazing team management from Robbie.

"But we had something about us, and obviously we had the King in Didier. He came up with a header that nobody I think in world football could have scored, and then the winning penalty.

"Didier became a different person in those games leading up to the final. Even in the warm-up, he was caged, and that confidence rubbed off on those around him. That's why he's a Premier League great. He scored goals at the right moment to win you games.

"When Cech saved Robben's penalty, I thought: 'This could seriously be it.' I was nervous stepping up for my penalty, and Manuel Neuer looked huge in the goal, with his arms up. I thought: 'Side to side he'll get this' so I went straight for his face hoping he'd move out of the way! Straight down the middle.

"Out-of-body moment is the best way to describe it. I never felt the crowd at that point, but I did feel the pressure of the situation. It becomes a bit about you at that point.

"When Didier scored, it was chaos. The best night of my footballing life. It was an incredible night. For many a year, we'd be trying to win it, we'd lost finals, semi-finals, and it felt like the last chance for this group.

Terry in full kit - 'He can wear what he wants!'

Captain John Terry, suspended for the final, was mocked for wearing his full Chelsea kit for the celebrations at the Allianz Arena, but Lampard says a man of Terry's stature can wear whatever he wants...

"If there is one man at this football club who deserves that moment, it was John. He was fighting along the way, sticking his body on the line in the first leg against Barcelona.

"It's the modern day of social media, people want to jump on anything! The main man of the club can wear what he wants. He can pick up that cup in whatever he wants, and it's fully deserved!"