Aston Villa are set to field a team made up of U23s and U18s against Liverpool; Sky Sports News has been told that Villa's hierarchy are hopeful the youth players have not been exposed to the virus with the first-team segregated in a 'red-zone' at the training ground

Aston Villa's FA Cup tie with Liverpool on Friday night is expected to go ahead but Wednesday's Premier League game against Tottenham is in doubt after an outbreak of coronavirus in the first-team squad.

Villa are set to be without their entire first team, along with boss Dean Smith and assistants John Terry, Craig Shakespeare and Richard O'Kelly, as they are isolating.

It means the Premier League side will be relying on their U23s and U18s, who were all tested for the virus on Thursday, for the tie to go ahead. Results are being fast-tracked so the club can know by Friday lunchtime.

Villa's U23s coach Mark Delaney will take charge of the team, if the game goes ahead.

Sky Sports News has been told that Villa's hierarchy are hopeful the youth players are clear of the virus.

Villa have always segregated a "red zone" within the Bodymoor Heath training ground since the return to play in summer, where only members of the first-team bubble are allowed; it has remained cordoned off to the junior teams. 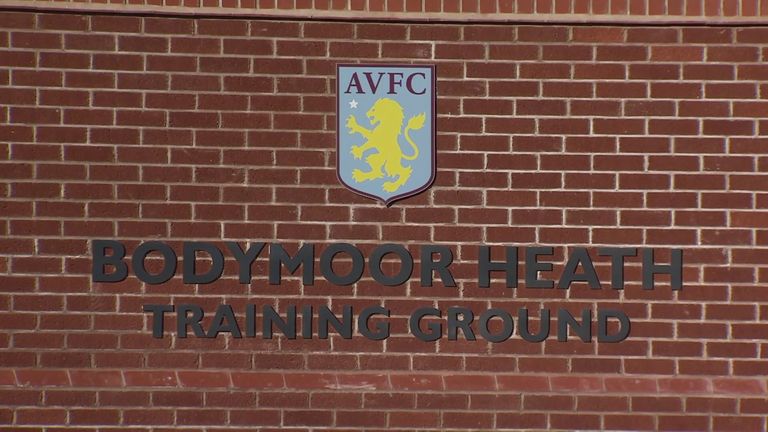 This is why there is optimism that those younger players have not been exposed to the outbreak, which has been described to Sky Sports News as "rampant" within the first-team squad.

It is thought the outbreak is much more extensive than it was with Fulham and Newcastle earlier this season.

As a result, Villa cannot use any players or staff from the first-team bubble for tonight's game - including physios, medical staff and the kit man.

Why can Villa play Liverpool but Spurs game is in doubt?

There is a feeling among Premier League clubs that there would be an issue with the integrity of the competition if Villa were forced to field a side of youth-team players against Spurs on Wednesday.

However, the time constraints with FA Cup scheduling mean there is very little flexibility to reschedule games, especially with the fixture list already congested as it is.

Any postponed match would have to take place before the fourth round in just two weeks' time.

The FA has told clubs taking part in the FA Cup third round they should field a team if they have at least 14 fit players, which can include youth-team players, as they seek to avoid a fixture pile-up.

A rise in positive coronavirus tests across the board has had a huge impact on the footballing schedule, with several games being postponed this weekend and a number of training grounds closed after a spike in cases.

Southampton's FA Cup third-round tie with Shrewsbury will not take place on Saturday as scheduled after the League One club reported a significant number of positive Covid-19 cases.

On Wednesday, the club notified the Football Association several players and staff members had tested positive for coronavirus, in addition to two positive tests last week, one confirmed as midfielder Marc Pugh.

It's the second Shrewsbury match to be affected by coronavirus after the League One fixture with Crewe on January 2 was postponed.

All teams in the FA Cup are being tested 72 hours before their fixtures.

Derby County have confirmed they will send a group of U23 and U18 players to play in the FA Cup at Chorley on Saturday following a coronavirus outbreak which has closed their training ground.

Middlesbrough and Sheffield Wednesday have taken the precaution of closing their training grounds following a rise in positive cases.

Wednesday caretaker manager Neil Thompson and his temporary assistants Lee Bullen and Steven Haslam are among those affected and will be absent from the dugout when the Owls travel to Exeter in the third round of the FA Cup on Saturday.

Blackpool's preparations for their FA Cup game against West Brom have been hindered by two positive tests in their weekly testing.

Wigan's two League One fixture against Hull City has been postponed, with the club informing the EFL that it cannot fulfil the fixturs due to a number of positive cases at the club.

In League Two, Colchester United's match against Tranmere has also been called off due to cases in both squads.

Clubs in the English Football League are to introduce twice-weekly coronavirus testing from January 11.

A number of positive tests at Arsenal have also led to the postponement of their WSL game at Aston Villa.

This weekend's Women's FA Cup ties could be decided by a coin toss after the lockdown meant the competition was suspended.

Meetings have since been held to discuss ways to progress with the tournament with a coin toss one of a number of options being considered for the second and third rounds.

No matches have been postponed due to coronavirus in Scotland, but Celtic have been criticised by First Minister Nicola Sturgeon for travelling to Dubai for a winter training camp ahead of their match against Hibs.

Sturgeon has called on the Scottish FA to look into the trip, but no further action will be taken by the governing body.

Greenock Morton have confirmed that three players have tested positive for coronavirus and are self-isolating until Monday night.

Their Scottish Cup tie against Dunfermline on Saturday is already due for a pitch inspection and could be rescheduled for Tuesday.

St Johnstone insist their Scottish Premiership match at Dundee United on Saturday will not be affected after they recorded a positive test among their playing staff.

Fulham have had two games postponed due to Covid - against Burnley and Tottenham - while the December 28 match between Everton and Manchester City was called off four hours before kick-off due to a number of positive cases in the City camp.

Burnley manager Sean Dyche confirmed at his media briefing on Thursday that the club has "a couple of cases" after their most recent screening.

Professional Footballers' Association chief executive Gordon Taylor has said players will be reminded not to hug their team-mates during goal celebrations following a spate of coronavirus cases across the leagues.