Roy Hodgson believes Crystal Palace attacker Eberechi Eze will be good enough to play for England but is not yet ready to make the step up.

The 22-year-old grabbed his third goal of the season in Saturday's 1-0 win over Wolves to continue his fine start at Selhurst Park following a summer switch from QPR.

Eze is eligible to play for Nigeria but is currently part of Aidy Boothroyd's England Under-21 squad, although he missed the recent games in November with an injury.

When Hodgson was in charge of the national team, he had to convince Jack Grealish to pick the Three Lions over the Republic of Ireland and the Aston Villa captain has forced his way into Gareth Southgate's plans ahead of the Euro's later this year.

And with Eze now in a similar situation, the Palace manager said: "I would like to think that like Jack Grealish before him, whom I found myself in a situation of needing to speak to, to try to persuade him he was good enough to play for England and that he should perhaps give it a chance, I would certainly say the same to Eberechi Eze if I was in that sort of situation.

"Is he ready at the moment? I wouldn't think so. I think there are so many players in his position and of his type, it would be very bold of me to suggest he could go in front of them.

"He is a member of the under-21 side and I would like to think and hope he keeps his position there and that he keeps improving and keeps in the eye line of Gareth Southgate and the other England coaches while he is working there.

"And at the same time of course his performances are monitored in the Premier League, but I'm more than happy with the progress he is making and the difference he has made as a player to our team.

"I think he will need a bit more of that before we start trying to raise him up even higher because already he has taken quite a big step." 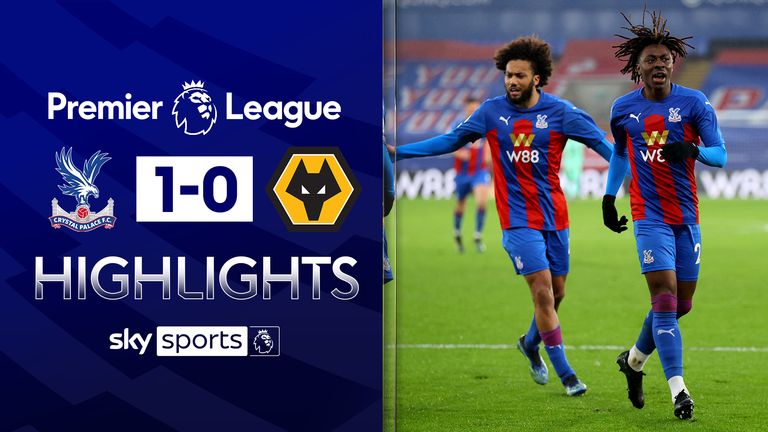 FREE TO WATCH: Highlights from Crystal Palace’s win over Wolves in the Premier League

Eze was deployed in the number 10 role for the visit of Wolves after playing the majority of the campaign on the left of a midfield four.

Hodgson ditched his favoured system for this season of 4-4-2 for a 4-2-3-1 formation against Nuno Espirito Santo's men and while it helped them have better intent, it was a switch back which was the catalyst for the winner.

Playmaker Eze found himself on the left again and was picked out by Jordan Ayew before he produced a powerful strike on the hour mark to move the Eagles 12 points clear of the bottom three prior to Tuesday's trip to Newcastle.

"It's a viable system and I think we can certainly get it to work but I think we were probably better when we went to what we've been doing when Eberechi went out into a position as a wide midfielder and Wilf (Zaha) went up top," Hodgson said.

"But it's not something which I wouldn't try to do again because I think it's got possibilities, that way of playing or that tweak in our system, but we probably need a bit more time to work on it than we had on this occasion."