Official will not referee in the Premier League this weekend after receiving abuse and death threats following controversial red cards given to Southampton's Jan Bednarek and West Ham's Tomas Soucek in previous two games; both decisions overturned on appeal

Mike Dean will not referee a game in the Premier League this weekend after his request to stand down was granted.

The 52-year-old and his family received death threats on social media after Dean had been involved in two controversial incidents last week.

The referee showed a red card to West Ham midfielder Tomas Soucek for catching Aleksandar Mitrovic with his elbow late on during Saturday's goalless draw at Fulham and also sent off Southampton defender Jan Bednarek in the midweek 9-0 defeat at Manchester United.

Both of the decisions - which followed Dean reviewing each incident on the pitchside monitor after consulting VAR - have since been overturned following an appeal. Dean asked to be stood down from the next round of Premier League fixtures and was not included on the match officials list for the forthcoming weekend.

Dean will be in charge of the FA Cup fifth-round tie between Leicester and Brighton on Wednesday night, but is missing from the Premier League list which was published on Tuesday afternoon.

"It is inexcusable that Mike Dean and his family have received online abuse, including death threats, as a result of doing his job officiating at a Premier League match," Masters said.

"It is completely unacceptable that we are seeing abusive behaviour aimed at players, managers and match officials regularly on social media platforms.

"Mike and his family have our full support in reporting this to the police. This once again highlights the need for greater proactive intervention from social media companies to stop online abuse and identify offenders."

Soucek also spoke out against the criticism levelled at Dean, posting on Twitter on Monday night: "Whatever decisions are made on the pitch should stay on the pitch. I don't like hearing about it interfering with personal life and I send Mike Dean and his family my support.

"There is no place for abuse of any kind. It is in the past and I'm now focused on the rest of the season."

Fellow referee Lee Mason has also come in for criticism, having been the VAR on both incidents involving Dean in the past week.

Mason will also not referee a Premier League fixture at the weekend but will fulfil fourth official duties for Liverpool's trip to Leicester on Saturday and the rearranged game between Everton and Manchester City four days later.

Dermot Gallagher believes the swift resolution has been the only positive from the fallout engulfing Dean.

Speaking on Sky Sports News' Ref Watch, Gallagher said: "Where I feel for Mike Dean, the VAR triggered a review and he went to the review area. The VAR told him to look at Soucek's clenched fist, something VAR looks out for, because when you clench your fist it's as if you're giving power to a decision. Well, I don't think it was that, Soucek may have had a clenched fist but it wasn't to gain power. 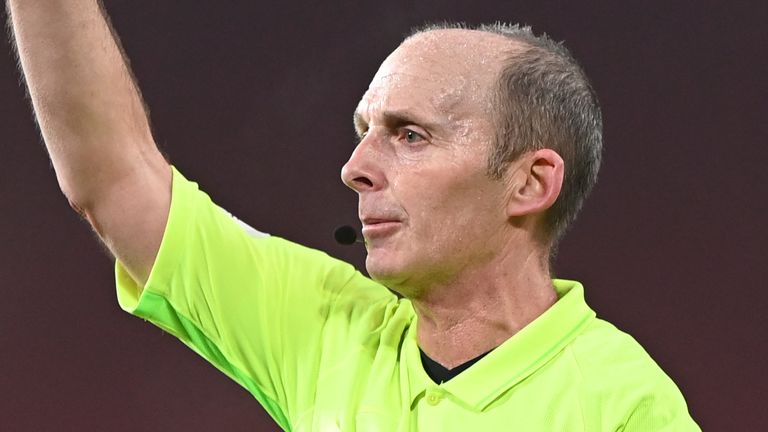 "In terms of Mike Dean listening to Mitrovic saying it wasn't a red card, I think you've got to be careful. As a referee, you have to be completely impartial and make your own decisions. The reaction of players can tell you certain things, but it is not an accurate barometer."