FA Cup semi-final: 4,000 locals allowed for Leicester vs Southampton at Wembley on April 18

Leicester vs Southampton FA Cup semi-final on April 18 being run as a test event for the return of fans; Snooker World Championships, the Carabao Cup final, and the FA Cup final also part of the pilot scheme; government's Covid passport initiative to be trialled at three Wembley games

Spectators will be returning to Wembley for the FA Cup semi-final between Leicester and Southampton with 4,000 local residents allowed to attend the game on April 18.

The match is being run as a test event for the return of crowds once coronavirus lockdown restrictions are eased, but neither Leicester nor Southampton are permitted their own supporters at the game.

Fans have been prevented from attending sports venues across England since the scrapping of the tier system in December.

Oliver Dowden, the Secretary of State for Culture, Media and Sport, confirmed the plans on Saturday night, tweeting: "We have revealed the initial pilot events which will help pave the way for larger audiences at sport, theatre and gigs this summer.

"The government's science-led Events Research Programme will work with organisers to undertake studies to get fans and audiences back safely."

We have revealed the initial pilot events which will help pave the way for larger audiences at sport, theatre and gigs this summer.

The government’s science-led Events Research Programme will work with organisers to undertake studies to get fans and audiences back safely. pic.twitter.com/CFtZKTwNlN

The other sporting events to be part of the pilot scheme are the Snooker World Championships, the Carabao Cup final and the FA Cup final.

Leicester vs Southampton, the FA Cup final, and the Carabao Cup final will also be part of government plans to trial a Covid passport scheme, as efforts ramp up to facilitate a return of full stadiums. 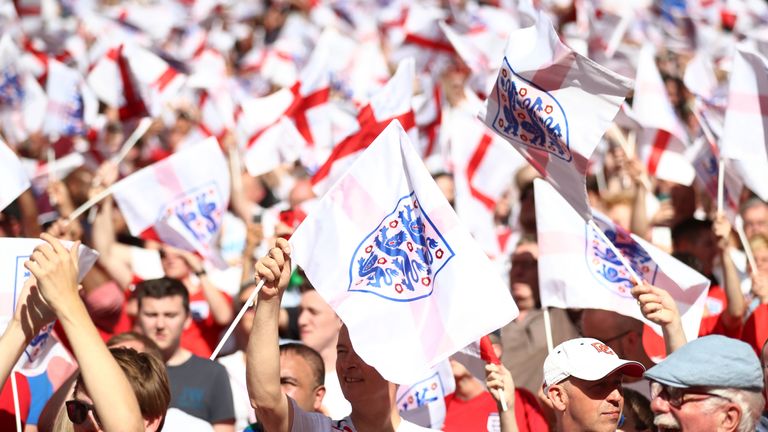 Culture secretary Oliver Dowden says he is 'hopeful and optimistic' that 'substantially more' than 10,000 supporters will be allowed to attend matches in England during the latter stages of this summer's European Championships

The government has described the plans as "Covid-status certification" and Prime Minister Boris Johnson is due to announce details for this system at a news conference on Monday.

The Prime Minister is expected to say that over the coming months, a system will be developed which will take into account three factors: vaccination, a recent negative test, or natural immunity determined on the basis of a positive test taken in the previous six months.

The NHS is said to be currently working on ways of providing people with the means to demonstrate their Covid status through "digital and non-digital routes".

On Saturday, Johnson said: "We have made huge strides over the past few months with our vaccine programme and everyone in the country has made huge sacrifices to get us to this stage in our recovery from Covid-19.

"We are doing everything we can to enable the reopening of our country so people can return to the events, travel and other things they love as safely as possible, and these reviews will play an important role in allowing this to happen."

Meanwhile, the EFL (English Football League) has confirmed that 8,000 fans will be permitted to attend the Carabao Cup final between Manchester City and Tottenham on April 25.

Fans from both clubs will be able to attend the Wembley showpiece and tickets will also be made available for local residents and NHS staff.

Rick Parry, Chair of the EFL, said: "The Carabao Cup is a prized asset of the EFL, a great competition for clubs to win and always a fantastic occasion so we are absolutely delighted to see supporters back for the 2021 Final, in what will hopefully be another important milestone along the way to a full return of fans.

"Football has lots of expertise in crowd management so we welcome the opportunity to support the Government in its Events Research Programme and will also take great pride in hosting NHS staff at the Final to whom we owe so much for their momentous efforts throughout the pandemic."

The Prime Minister has previously revealed plans to ease restrictions step-by-step across the whole country simultaneously, rather than on a regional basis.

The UK government is hopeful a large crowd will be able to attend the Euro 2020 final at Wembley on July 11, but capacity is still to be determined.

The showpiece match of the delayed tournament is due to take place almost three weeks after it is hoped remaining lockdown restrictions in England will have been lifted.

Yet that is no guarantee sporting stadia and arenas will be able to operate at full capacity, with further restrictions still possible.

The roadmap out of lockdown in England allowed grassroots outdoor sport to resume on March 29. The third step of the easing of restrictions on May 17 at the earliest would allow stadia to open with a 25 per cent capacity limit, up to a maximum of 10,000 spectators. The current plan is then for all restrictions on social contact to be lifted on June 21.

Wembley is hosting seven Euro 2020 matches, including both semi-finals on July 6 and 7 and the final on July 11.