Former Manchester United forward Eric Cantona has been inducted into the Premier League Hall of Fame.

Cantona scored 70 goals in 156 Premier League appearances for United, where he won the league title four times in five seasons at Old Trafford before his retirement in May 1997.

The former France international is the first of six inductees chosen from a 23-man shortlist after a fans' vote.

The honour recognises players who have demonstrated an exceptional record of on-pitch success and have made important contributions in the division since its creation in 1992.

Cantona very proud, but not surprised at Hall of Fame honour

Cantona played a key role in United's dominance of the Premier League in the 1990s under Sir Alex Ferguson, ending their 26-year league title drought following his move from Leeds United early in the competition's inaugural 1992/93 season.

"I am very happy and very proud and at the same time, I am not surprised!" said 54-year-old Cantona, who described himself as the "exception" among the shortlist of nominees.

"Of course, to play in England was a dream. It is a dream of everybody to play in the Premier League. 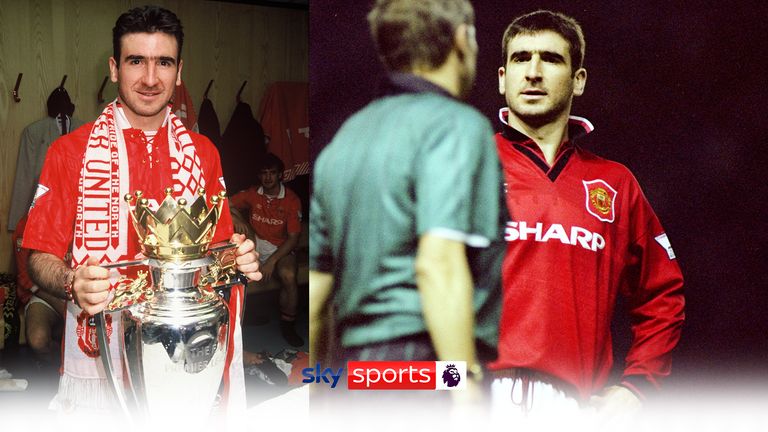 Sky Sports looks at the reaction from fans, Alex Ferguson and Eric Cantona himself on the day he signed for Manchester United

"I have been lucky to play in this [Manchester United] team with wonderful players, a wonderful manager and wonderful fans.

"It was the football I dreamt about because Manchester United is a club where they want to win things but in a good way. It was like this in the time of Matt Busby. This is the identity of this club, the philosophy of this club."

The fallout from Manchester United's involvement in the European Super League could lead to the club building something stronger, Eric Cantona said.

Cantona was stripped of his captaincy of the France national team for kung-fu kicking a Crystal Palace fan in the crowd at Selhurst Park in January 1995, which led to a nine-month ban from football.

The Frenchman - nicknamed by Manchester United fans as "King Eric" - is also known for turning up his collar when he played.

"I think for one game I just put my shirt like this and my collar stayed up and we won," he said.

"So, because we won I kept it and we kept winning. It became something special, but you have players who keep their underwear and not wash it. I prefer to pull my collar up!"

Who was in the 23-man shortlist for next six Hall of Fame inductees?