Netherlands face Czech Republic in Euro 2020 last-16 tie in Budapest; Wijnaldum: "If the referee, or maybe the opponents, jump in, then the signal is stronger. That's what I'm thinking right now but I'm not ruling out walking off the field if something like that happens on Sunday" 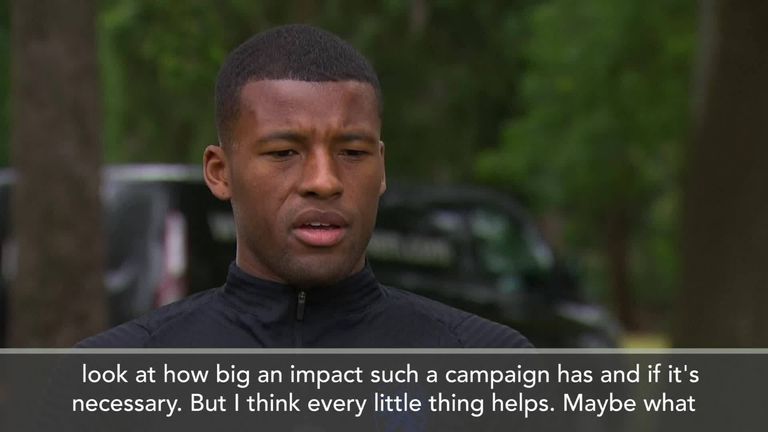 Netherlands captain Georginio Wijnaldum has called on UEFA to take stronger action against racism and says players subjected to abuse should not have to make a decision on whether to walk off the field in protest.

Wijnaldum said he had thought long and hard about leaving the pitch if subjected to racism when the Netherlands face the Czech Republic in Sunday's Euro 2020 last-16 tie in Budapest.

"I've thought about it very carefully," said Wijnaldum, who will wear an armband bearing the words 'One Love' and a rainbow motif in a stand for diversity in Budapest.

"I previously indicated that I would walk off but that was easier to say back then because I had never really run into that problem.

"After that, I started to think very hard about it. Gini, you will play in Hungary later in the tournament, what will you do if it happens? What if you play against a weaker team and those fans know that and they antagonise you to get you to walk off the field so that you lose the match?"

Wijnaldum said the responsibility for action lay with the match officials and UEFA.

"I think I will go to the referee but, to be honest, I'm not sure what my reaction is going to be in the heat of the moment," he said.

"I've never experienced it myself and I hope never to. But if it happens, UEFA must act. They need to realise that if they don't, they are putting a big responsibility on the players.

"Some players have walked off in the past but if you ask them if they felt supported, I think they'll say they weren't.

"If the referee, or maybe the opponents, jump in, then the signal is stronger. That's what I'm thinking right now but I'm not ruling out walking off the field if something like that happens on Sunday."