Under-pressure Aston Villa boss Dean Smith vows to fight on; Paul Merson says the club should stick with him

Smith, speaking after losing 1-0 to Southampton: "I'm a scrapper. Always have been. I'm disappointed we've lost five on the spin but we've got players out injured. We will get players fit during the international break and we'll be better when we come back." 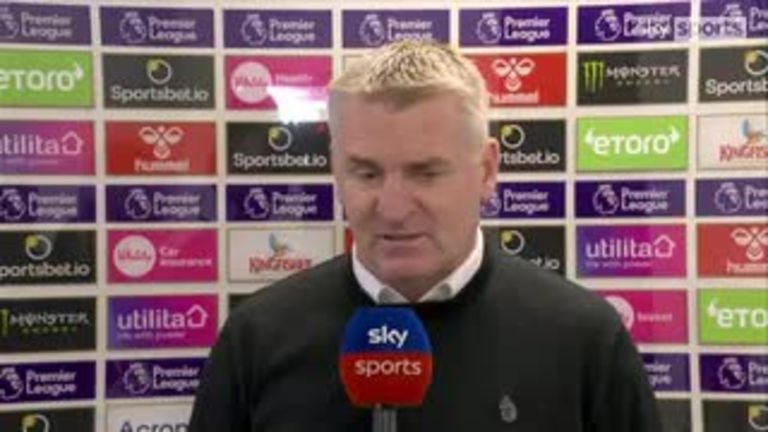 Dean Smith has vowed to fight on in his job, calling himself a "scrapper" as Aston Villa slipped to a fifth straight defeat at the hands of Southampton.

Adam Armstrong's early strike was enough for Southampton to earn three points against Aston Villa and inflict a fifth consecutive loss to increase pressure on Smith.

Villa have not collected a single point since winning at Manchester United on September 25 and this 1-0 reverse will only fan the flames of speculation regarding the manager's position ahead of the international break.

When asked about his future, Smith said: "I'm a scrapper. Always have been. I'm disappointed we've lost five on the spin but we've got players out injured. Five of our bench today were academy graduates. We will get players fit during the international break and we'll be better when we come back.

Merse: Keep the faith with Smith

Villa did improve their efforts after a lacklustre first-half but despite posting 14 shots, they failed to seriously test Southampton goalkeeper Alex McCarthy. Smith has now lost five successive league games for the first time as Aston Villa head coach.

Despite the bleak run of form, former Villa midfielder Paul Merson thinks the hierarchy should keep the faith with Smith.

When asked how much patience Villa should show Smith, Merson said: "Plenty. I think he's a good manager and I think he needs time.

"Jack Grealish was a big football for Aston Villa. He was their main player, so Smith needs time.

"As he said, and he never really makes excuses, but he's got five or six players out that [usually] play.

"I hear managers saying they are not having too much luck with injuries and then you look at the list and one of them plays out of six. The players out for Villa are all big players and Smith needs them back in the team.

"Also, what he said about the six lads coming through the academy and being on the bench, that's big stuff. You are playing in the Premier League and you are bringing youngsters through at the same time.

"For me, keep him in there because he will give the kids a chance as well. So, yes, keep the faith."

Jamie Redknapp agreed with Merson regarding Smith's future. He pointed out that not having Danny Ings, Bertrand Traore, Morgan Sanson and Douglas Luiz should give the manager a bit of breathing space over the international period.

Redknapp said: "The first-half performance is the sort of performance that will get a manager the sack, but they came out second-half, showed some desire and they made some chances.

"They were not the clear-cut chances you would have liked, but look at Smith and the players he's got injured at the moment.

"He's got no Danny Ings, no Bertrand Traore, no Morgan Sanson and no Douglas Luiz. They are players that can do something and that are really important.

"So, I think they just have to be very careful.

"As pundits, there are managers you get accused of being so aggressive towards getting them the sack, but I look at Dean Smith and it was always going to be hard.

"They've lost their talisman and their best player in Jack Grealish so whoever was going to take on the group was going to find this because they were so reliant on him. Every time I watched Villa without Grealish last year there were poor performances week in, week out.

"So, for that reason, you've got to give him time to get the likes of Emi Buendia and Leon Bailey playing to a level they can because right now, Bailey hasn't adjusted to the Premier league and Buendia hasn't found his form."