Kalvin Phillips: "The night before the [Euro 2020] final Jack Harrison, who used to play at New York City with him, sent me a video of Pirlo. It was a video to me saying 'good luck in the final and he wishes me all the best' so that was very nice"

Kalvin Phillips has revealed he received a good luck message from Andrea Pirlo on the eve of England's Euro 2020 final defeat to Italy.

The Leeds midfielder has been dubbed the 'Yorkshire Pirlo' with his playing style compared to the World Cup and Champions League winner.

Speaking in August, Pirlo told The Athletic: "In England, there's never been this kind of player. There have been great midfielders over the years with different skills - there's the boy at Leeds (Phillips), who's a bit of a regista (playmaker)."

Phillips returned to the England side for Friday's 5-0 win over Albania which all but assured them of World Cup qualification.

The 25-year-old had missed the October internationals through injury, having started all of England's games on their run to penalty shoot-out heartbreak against Italy in the final of Euro 2020.

Now, ahead of Monday's final Group I qualifier in San Marino, Phillips has told of how he heard from Pirlo, who lifted the 2006 World Cup with Italy, ahead of the loss.

"It's always nice to get the recognition of some unbelievable players," he said.

"The night before the final Jack Harrison, who used to play at New York City with him, sent me a video of Pirlo.

"It was a video to me saying 'good luck in the final and he wishes me all the best' so that was very nice.

"It was a very nice feeling and obviously I thought it was going to say something about Italy but, no, he wished me well - full respect for that.

"I just got the video and I was like 'oh my God'. I've never met him, I'd like to meet him to be honest. I've seen that is a very cool guy, but I've heard he's a nice guy as well.

"To have someone on the other side, on the other team, wish you well and especially a player like that, it is always a great feeling."

While he was missing through illness for the Albania win, Declan Rice has formed a fine midfield partnership with Phillips.

Rice, too, started all of England's Euro 2020 fixtures and Phillips believes the West Ham man can be the Gennaro Gattuso to his Yorkshire Pirlo.

"I love playing with Declan," he said.

"We're two very similar players but work in different ways when we play together. Declan is almost a protector in front of the back four and I'm almost a dog that goes running after people that have got the ball."

Asked if Rice could be compared to Gattuso in the same mould as Phillips' likeness to Pirlo, he added: "You could say so!

"Declan is a very good player and you can see what he's done this season with West Ham, the way he's playing. He's only going to get better and I'm very happy for him."

Phillips has a collection of shirts from his England colleagues as well as one presented to him by Leeds boss Marcelo Bielsa following his first international call-up.

He refrained from asking for an Italy shirt after the loss in July but did reveal it was another midfielder for the Azzurri who he is a particular fan of. 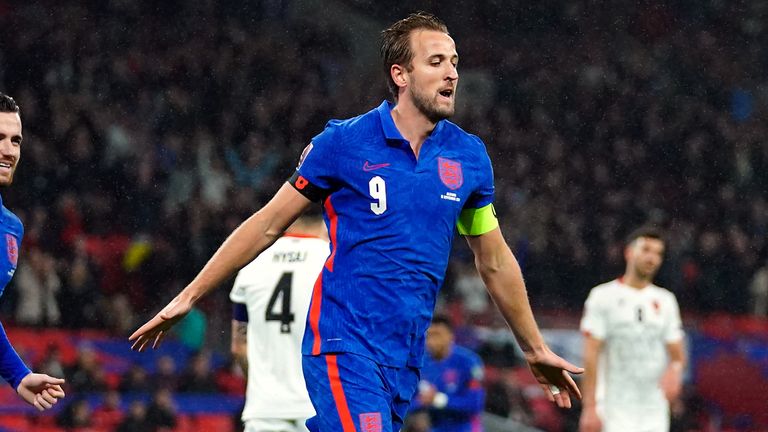 Jordan Henderson says his England teammate Harry Kane proved he is still one of the best strikers in the world with his hat-trick against Albania.

"I knew it would be hard to get someone's shirt after that," he said.

"I did ask for (Marco) Verratti's. I've always loved him and think he's an exceptional player. Obviously, he might have wanted to keep it as well as a souvenir for himself. There's no hard feelings on that one.

"I don't know whether I'm a similar kind of player to Verratti. I like getting stuck in. I just think when I watch him, the way he controls the game and if he needs to rat about, he can rat about.