Real Betis and Sevilla abandoned with the score at 1-1; Bayern Munich's Robert Lewandowski scored a hat-trick to make it 300 Bundesliga career goals as he steered them to a 4-0 win at Cologne on Saturday that restored a six-point lead at the top

The Copa del Rey derby match between Real Betis and Sevilla was suspended after a pole hurled from the stands hit Sevilla player Joan Jordan in the head on Saturday.

Jordan went down immediately, holding his head. He was quickly back on his feet but was helped to walk off the pitch just before the teams were ordered by the referee Ricardo de Burgos to follow. Local media reports said the midfielder was taken to a local hospital for a medical check.

De Burgos wrote in his referee report that the object was a hollow 50-centimeter (20-inch) PVC bar thrown from a zone filled with Betis fans.

After a wait of over 20 minutes, the game was officially suspended by the Spanish soccer federation. The federation said it condemns all acts of violence on the playing field.

Elsewhere, in the other round-of-16 games, Mallorca, Rayo Vallecano and Cadiz all advanced.

Cadiz also moved on after getting past second-tier side Sporting Gijon in a penalty shootout following a scoreless match. 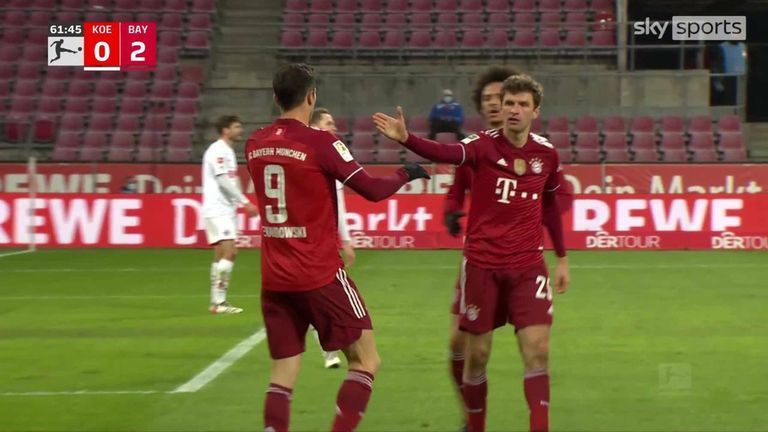 Highlights of the Bundesliga clash between Cologne and Bayern Munich

Bayern Munich's Robert Lewandowski scored a hat-trick to make it 300 Bundesliga career goals as he steered them to a 4-0 win at Cologne on Saturday that restored a six-point lead at the top.

Bundesliga top scorer Lewandowski rifled in from a Thomas Muller assist in the ninth minute to set a league record as Bayern have now scored in 66 consecutive Bundesliga matches.

With Dortmund having beaten Freiburg 5-1 on Friday to provisionally move within three points of the leaders, Bayern were eager to make sure of victory quickly.

They scored again when Corentin Tolisso beautifully combined with Muller to thunder a shot into the top corner in the 25th minute.

The hosts, who were on a three-game winning run, tried to get back into the game and put the ball in the net through Mark Uth after the half-hour mark but it was ruled offside.

Lewandowski killed off the game just past the hour, chipping the ball past Cologne keeper Marvin Schwaebe to make it 3-0.

The 33-year-old Pole bagged his 23rd goal of the campaign, and his 300th in the Bundesliga having also played for Borussia Dortmund, when he slotted home from close range after good work by Leroy Sane 12 minutes later.

Lewandowski is second on the league's all-time scorers list with only Bayern great Gerd Mueller ahead of him with 365 goals.

The Bavarians, chasing a record-extending 10th consecutive league title, have 46 points from 19 games with Dortmund in second place on 40.

Robert Andrich and Patrik Schick struck in the second half as Bayer Leverkusen moved up to third with a 2-1 win at Borussia Monchengladbach. 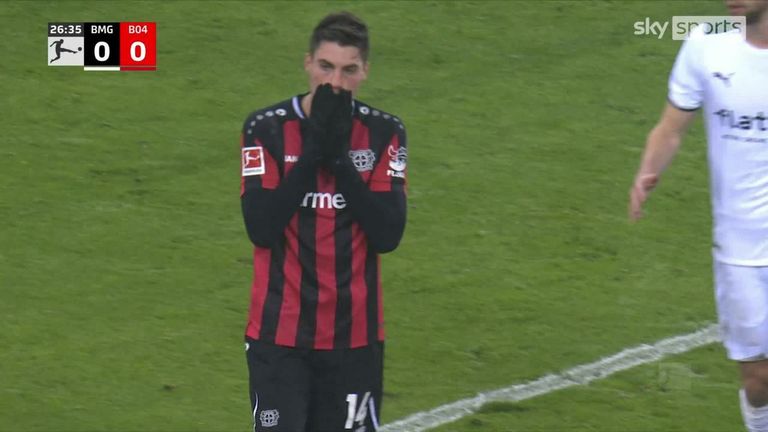 Highlights of the Bundesliga game between Borussia Monchengladbach and Bayer Leverkusen.

Nico Elvedi netted for the hosts in the closing stages but Leverkusen held their nerve to secure a first triumph in five league outings.

Elsewhere in Germany's top flight, Hoffenheim suffered a 2-1 defeat to Union Berlin, while RB Leipzig recorded a 2-0 win over Stuttgart.

Wolfsburg and Hertha Berlin played out a goalless draw, with Mainz increasing their unbeaten streak to seven matches following a 1-0 win over Bochum.

Ciro Immobile scored twice to climb to the top of the Serie A scoring charts as Lazio beat Covid-hit bottom side Salernitana 3-0 on Saturday to go sixth. The Italy international struck twice in the opening 10 minutes to take his tally for the season to 17 goals, one more than Fiorentina's Dusan Vlahovic.

Immobile's second was his 140th Serie A goal since joining the Roman club ahead of the 2016/17 campaign.

That tally is second only to Bayern's Lewandowski (179 goals) and Lionel Messi of Paris Saint-Germain (163) in Europe's top five leagues during that period.

The 31-year-old was close to a hat-trick when his glancing header struck the underside of the bar, as the visitors dominated against a Salernitana side missing six players through Covid-19.

Substitute Manuel Lazzari completed a comfortable win by finishing off a flowing counter-attack after the break.

Maurizio Sarri's side rose to sixth place on 35 points, three behind Juventus, while Salernitana remain bottom with 11 points.

Juventus secured a routine 2-0 win at home to Udinese.

Paris Saint-Germain extended their Ligue 1 lead over Nice to 11 points following a 2-0 home triumph against Brest.

Kylian Mbappe opened the scoring with a fine finish after 32 minutes before Thilo Kehrer sealed the victory in the second half.

In the day's other fixture, Seko Fofana netted in stoppage time as Lens edged a 2-1 win at St Etienne.