England U21 0-1 Switzerland U21: Swiss grab deserved win over Young Lions in Euro U21 Championship opener

Free match highlights and report as Aidy Boothroyd's team are beaten by Dan Ndoye's 78th-minute winner; England struggled to create chances in Euro U21 Championship opener in Slovenia; Boothroyd says his side played too "safe"; Young Lions face Portugal next on Sunday 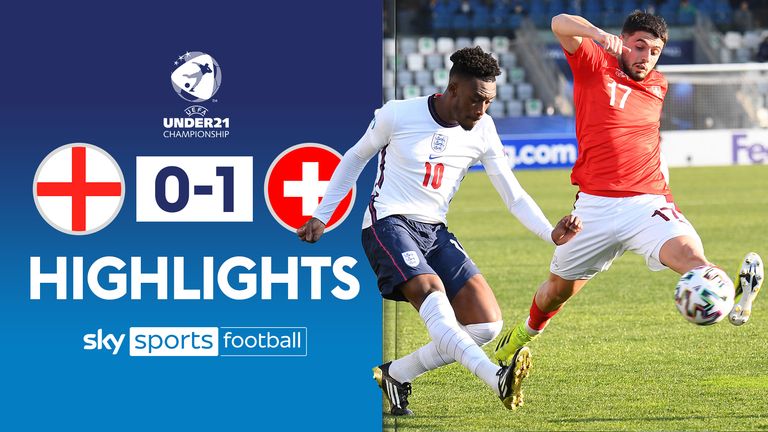 A flat England continued their poor run in the European Under-21 Championship with a 1-0 defeat by Switzerland in their group-stage opener in Slovenia.

Among the favourites for the tournament, Aidy Boothroyd's U21 side struggled to trouble Switzerland, who grabbed a bizarre but deserved winner 12 minutes from time through Dan Ndoye at the Bonifika Stadium in Koper.

Brighton's Andi Zeqiri missed a clear chance to put Switzerland ahead early on after Ben Godfrey's miscued pass, before Zeqiri again headed inches wide later in the half.

England struggled to play out from the back as Tom Davies was caught early in the second half, only for Bastien Toma to hit the foot of the post from the resulting break, but the Swiss got the winner as Ndoye's effort deflected off his other foot and over Aaron Ramsdale from the edge of the box (78).

England, who have gone out of the group stage in five of the last six European U21 Championships, now face Portugal on Sunday evening looking to keep their hopes of qualification for May's knockout phase alive.

Man of the match: Bastien Toma

How Swiss pounced on under-par England

Looking to make up for 2019's poor showing in the tournament, Boothroyd's squad had familiarity in seven members of the 2017 U17 World Cup-winning side, with three in the starting XI.

But the Swiss were stubborn and well-organised early on, restricting an England side full of Premier League experience. 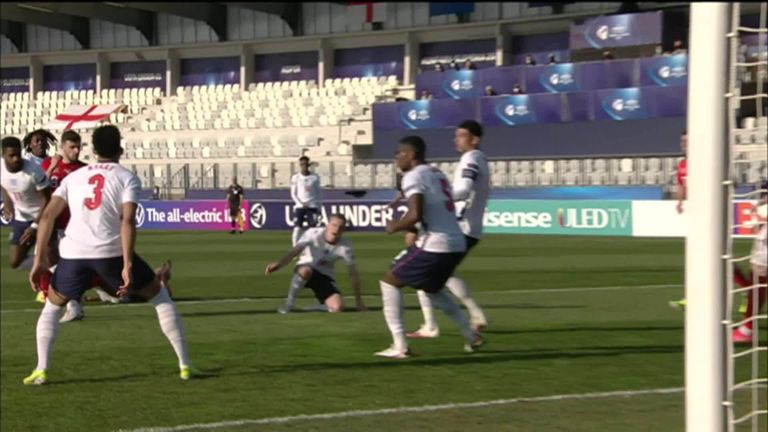 Their own Premier League man, Brighton's Zeqiri, should have opened the scoring early on as the Swiss pounced on Godfrey's poor crossfield pass, but Zeqiri saw his low effort saved by Ramsdale after Toma found him one-on-one.

Everton's Davies curled a fine effort just over a minute later, before Callum Hudson-Odoi turned wide on the stretch after some nice skill in the box, but the Swiss went close again near the half-hour mark as Zeqiri headed inches wide from 12 yards.

England were threatening from set-pieces, with Lloyd Kelly heading wide Dwight McNeil's corner, but after the break they were caught high up in possession again as Switzerland pounced.

Davies gave the ball away, before Jeremy Guillemenot's cross fell to Toma at the back post, but his low effort under Ramsdale struck the foot of the post.

Debutant Arsenal midfielder Emile Smith Rowe struggled to get into the game, replaced by Eberechi Eze 66 minutes in, and though Hudson-Odoi forced a rare save from Anthony Racioppi with a free-kick on the edge of the box, Switzerland opened the scoring.

Callum Hudson-Odoi also started on the right of a front three, with Dwight McNeil on the left. Tom Davies, the most capped player in the squad, also started.

After receiving Kastriot Imeri's neat flick on the edge of the box Ndoye struck the ball with his right foot and slipped, but his effort fortuitously looped up off his left foot and over Ramsdale in the England goal.

England, who had 65 per cent of the ball, huffed and puffed for a leveller, but ended the game with just one shot on target as Boothroyd's Young Lions face a fight to keep their hopes of competing in May's knockout stages alive. 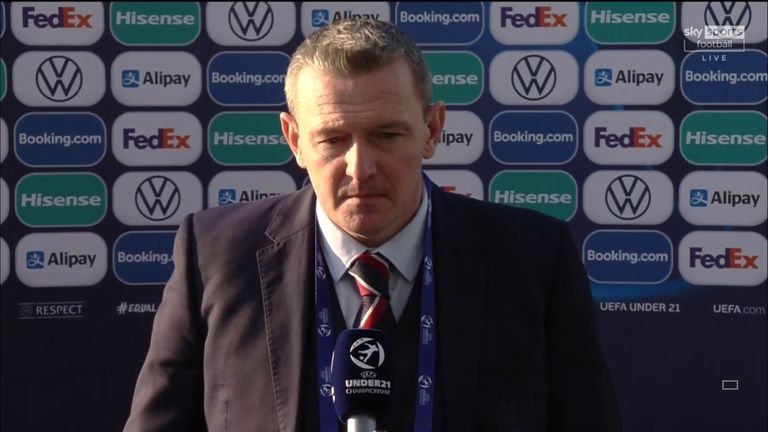 "We played a safe game today. If you're going to win, you can't play safe. You have to risk the ball in the right time, in the right areas, and I didn't think we did that.

"There's no time to mope around and feel sorry for yourselves at freak goals. You've got to get on with it. We focus now on our next game, and making sure we have a real go, and make sure we improve on that work in the final third."

"I thought it was a really disappointing performance from England. There was no real tempo to it, when you look at the attacking players on the pitch and what they created. It was next to nothing.

"There was no real fluidity to the way England played and I wasn't quite sure what the game plan was. When Aidy Boothroyd reflects on the performance, I'm sure he'll be totally disappointed in his team."

"If they play like that again, they're out - it's that plain and simple. The stats speak for themselves. There were a lot of passes and plenty of creative influences on the pitch to get the ball to Callum Hudson-Odoi in the hope he'd do something. Other than that, they played totally into Switzerland's hands.

"They sat nice and narrow, were comfortable off the ball, and were organised. Dwight McNeil looked lost where he was playing, Smith Rowe was quiet, and Nketiah was frustrated. You come away thinking, 'who created anything', 'who did anything?'

"Boothroyd can send them out onto the pitch with a game plan but it's up to the players to do something themselves."

England's remaining two fixtures will also be blogged live on skysports.com and the Sky Sports App: