Chelsea have the best defensive record but wing-backs Reece James and Ben Chilwell are proving destructive in the opposition half too. We look at how Thomas Tuchel's system sets the standard in the Premier League. Watch free highlights of Leicester vs Chelsea from 5.15pm on Saturday.

Antonio Conte is back in the Premier League and he has wasted little time installing his favoured three-man defence at Tottenham. Manchester United, Brentford, Wolves, and Newcastle also used the set-up in the last round of league games, with the formation firmly back in vogue.

But it is at Conte's former club Chelsea where the system is currently at its slickest.

It was Thomas Tuchel's answer to his new club's defensive frailties when he arrived in west London in January and the results were remarkable. Chelsea's backline was transformed into a mean machine, recording 19 clean sheets in their final 30 games of the season.

This term, they remain incredibly difficult to break down. At times, goalkeeper Edouard Mendy has been busier than Tuchel would perhaps have liked but the raw numbers show they have conceded just four times in 11 Premier League games, the best record in the division.

Antonio Rudiger, Andreas Christensen and Thiago Silva - Chelsea's back three in their last two Premier League games - feel like a brilliant blend, while Cesar Azpilicueta and Trevoh Chalobah have both delivered when called upon in that area of the pitch.

But Chelsea are also the second-top scorers and it has been the offensive opportunities presented by Tuchel's variations on this formation which has caught the eye in recent weeks. Particularly the form of wing-backs Reece James and Ben Chilwell.

England boss Gareth Southgate described the pair as "key to this system" before they helped his side - set up in a similar manner - rout Albania on Friday night and it is clear the national team boss will benefit from these two players becoming experts in these tricky-to-master roles.

James and Chilwell have played the last three Premier League games together, after a rejuvenated Marcos Alonso had presented a threat from left wing-back earlier in the season.

Chilwell scored four goals in five games for club and country last month, while James - who is enjoying an exceptionally good season - has three goals and two assists in his last five games alone, including a thumping double away to Newcastle.

"He shoots like a horse," laughed Tuchel after that game, when explaining why specific shooting practice wasn't required for James. But the frequency with which James and Chilwell arrive in the box is almost certainly worked on.

Of Premier League players to have played at least 450 minutes out of a possible 990 this season, James and Chilwell average more touches in the opposition box than any other defender.

Remarkably, James' total of 26 touches in the opposition box is only two fewer than Joao Cancelo and three behind Aston Villa's Matty Cash - and those top two in this metric have played more than twice as many minutes as James this season, with suspension and an ankle injury restricting the England man's game time.

Getting the balance right between that attacking threat and the defensive work required is not easy to achieve, either tactically or physically. In the past two Chelsea games, for instance, Chilwell has either covered more ground or recorded more sprints than any player on the pitch, and regained possession or made more clearances than his team-mates.

"We demand a lot from our wing-backs," explained Tuchel during an exclusive interview with Sky Sports earlier this season. "They need to defend when it's time to defend and they need to attack when we arrive in the opponent's box.

We demand a lot from our wingbacks. They need to defend when it's time to defend and they need to attack when we arrive in the opponent's box.

"You need to have options to stretch defences."

But for James and Chilwell, it isn't just about ploughing up and down the flank to offer that width.

Space can be opened up by their team-mates infield and then there is a degree of freedom in the final third for James and Chilwell to come inside. James spotted those moments at Newcastle and capitalised.

"We need the wing-backs to arrive in the box to increase the chance of scoring and create goal chances.

"It's a complex game and I don't think Reece can score if Callum Hudson-Odoi doesn't do the dribbling and Chilly opens the space [in the build-up to his first goal]. Sometimes our strikers are sacrificing space." 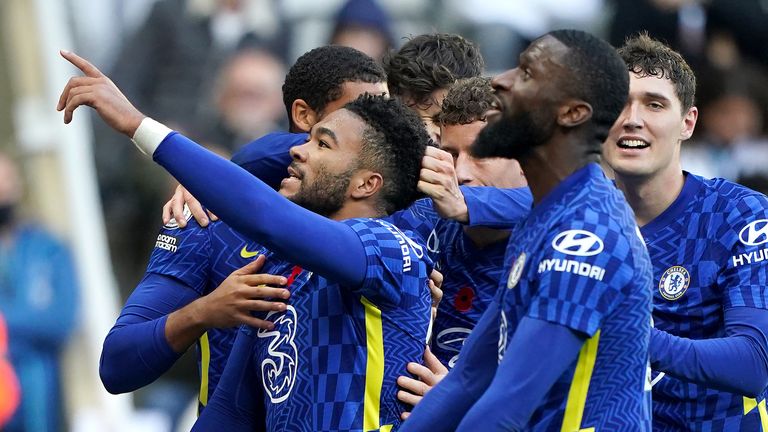 Chelsea's Reece James produced the performance of the round with his two goals against Newcastle.

Finding the right mix in the middle of the park has not been straight forward for Tuchel this season.

His early plan to have Havertz and Mason Mount playing as narrow support strikers to Romelu Lukaku looked promising, but wastefulness and injuries forced Tuchel into shuffling that trio, along with Hakim Ziyech, Timo Werner and Christian Pulisic, into different attacking patterns.

The return from the fringes of Ross Barkley and Ruben Loftus-Cheek, while credit to the character of both players, is another suggestion Tuchel has not quite decided on his first-choice picks in attacking areas.

But there's no doubt the wing-backs are delivering reliably for him right now. They're setting the standard for how to play this system in the Premier League, too.

Conte's Tottenham come to Chelsea on 23 January, three days before the anniversary of Tuchel's appointment.

The German's wing-back way has already taken Chelsea to a Champions League victory and by then they could well be on course for a Premier League title, too - five seasons on from Conte's own triumph with the system at Stamford Bridge.

Follow Leicester vs Chelsea on Saturday, kick-off 12.30pm, with the Sky Sports website and App, then watch free match highlights from 5.15pm.