City, who have been stuttering of late, host Southampton on Nissan Super Sunday before Jose Mourinho's return to Chelsea with Manchester United, while Arsenal host Middlesbrough at the Emirates on Saturday.

Here's how Merse got on last week...

Read on to find out what Merse is tipping...

Bournemouth are playing very well, I watched them last week. Spurs had a tough game in midweek and it might catch up with them for the early Saturday kick-off. I know they got beaten 5-1 last year, but it will be different for Bournemouth.

I've been impressed with Spurs, even when they don't play well they get a result. They're undefeated, and when they go 1-0 down late on against West Brom, they fight back for a result.

But I can see a draw here, which would be a superb result for an ever-improving Bournemouth side under Eddie Howe.

This is a difficult game for City. They had their confidence shot at the Nou Camp, but I think they'll just get a result here.

I agree that City are short of the players Pep Guardiola wants. They've got to change their style of play slightly, you can't keep rolling out from the back, because teams will just close you down.

Also, you put a bit of a pressure on the goalkeeper. I want a goalkeeper who is going to make a save, not spray it around the pitch all day.

Southampton will be a threat, and will give them a really good game, but I'm going with City.

I'm going to go 1-0 Chelsea. I think they'll have just a little bit more than what Liverpool had in attempting to break United down.

I don't think they're good enough to mix it at the moment. I think Jose Mourinho knows that, he set his team up, and they didn't lose. It was a great result.

He will 100 per cent do the same at Stamford Bridge. If they have a shot, and Chelsea have a shot, there's only one winner, and that's Chelsea by quite a few. Mourinho won't go there and want to open the game up in that way.

Arsenal are irresistible at the moment. Swansea could count themselves a little unlucky last weekend, but the way the Gunners played in the Champions League showed that confidence is high at the Emirates.

Middlesbrough are struggling, they've got little pace in the team and up front, and I'm going 4-0 Arsenal. They're going to suffocate them, and I just don't see how Boro will get out of their half.

I really hope Arsene Wenger doesn't start changing the team, because that's dangerous, they're on a right good run at the moment, and you'd like to think he'll keep the same team.

I'll go one each here. I think Leicester have put their eggs in the European basket and I don't think they'll cope too well with Christian Benteke.

Palace were getting on alright and then go and lose to West Ham, so I don't think on current, short-term form there's a lot between these teams.

I just think Leicester have been found out in the Premier League. Other teams are sitting back now and saying: "We're not chasing the game, you chase the game!"

It's reversed around the other way; Jamie Vardy is one of the best in the business at running onto a ball over the top, but teams are sitting back and giving him three or four yards, and making him turn and attempt to beat two or three players.

Sunderland are struggling, and West Ham had a really good result at Palace and played superbly in the first half.

I can't see anything different here. It's the perfect game for them to get back-to-back wins for the first time this season, with Sunderland bottom of the league without winning a game. But West Ham have to get through the first 20 minutes positively.

Sunderland have had a lot of injuries to be fair, you've got to feel sorry for them, they haven't had a lot of luck so far.

I watched Hull last week, and there are ways to lose football matches... they were well beaten by Bournemouth.

In a game where you're looking at the opposition and thinking: "Don't lose to these teams, they're going to be around us at the end of the season" they were blown away.

I think Stoke are a decent team, and Hull really have to buck their ideas up after last week. I think they'll have to score first.

Watford had a really good result last week, and Swansea did alright against Arsenal. They really should have scored when Arsenal went down to 10 men, but they didn't.

That was a free swing, but they have to win this game. It's Bob Bradley's first game at home, he'll have them up for it, but I can see a draw.

Bradley did brilliantly for the US national team. I like him, I like the way he talks, his philosophy, and he's a hard-worker.

Burnley need to get a result. They try hard every week, but just don't have that little bit extra, and I think it's taking its toll.

You have to win your home games, if you're going to get beaten every week away from home. It puts severe pressure on them at home. Fulham a few years ago couldn't win away for toffee but their home record was phenomenal, and it kept them up. 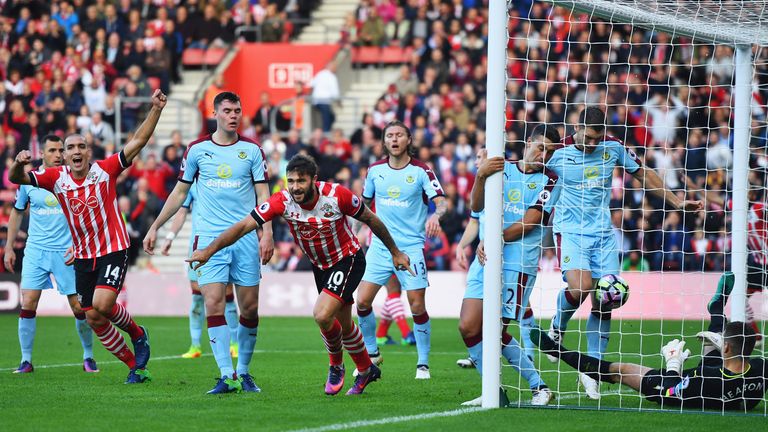 Everton had a good result at Man City, but they were struggling before that. I think the turning point for their season was the Norwich game in the EFL Cup. The fans have been without a cup win since 1995, and they got beaten at home to Norwich, who didn't desperately need a cup run in their busy season.

But I think Everton will be too much for Burnley.

I was a bit disappointed in Liverpool against United. People criticised United, who did sit back, but I thought Liverpool were going to come out of the blocks and play like they have been at home recently.

They created two chances in the whole match, and I didn't think it was good enough. They didn't have many ideas, and struggled against a team who, granted, defended well. It was disappointing, and I expected them to win the game.

West Brom are going to be hard to beat, they're doing well, but I think Liverpool will win this. Adam Lallana has to play, they should take a chance and play him.

They missed him against United, they didn't look like they were going to open much up without him in the team. The Baggies will sit back and they need to break them open.

You can watch Premier League football, plus England's tour of Bangladesh and the US Grand Prix on Sky Sports. Upgrade now and enjoy six months at half price!