Sky Sports pundit Paul Merson explains why Aston Villa must act fast to replace Dean Smith, and why Steven Gerrard or Frank Lampard would be the perfect fit at Villa Park...

Paul Merson says the opportunity to manage Aston Villa in the Premier League could prove too difficult for Steven Gerrard to turn down and insists Frank Lampard should also be in the mix to succeed Dean Smith.

Smith became the fifth managerial casualty of the Premier League season after Southampton inflicted a fifth consecutive defeat on Villa on Friday to leave them two points and two places above the relegation zone at the 11-game mark.

Merson, who enjoyed four fruitful years as a player at Villa Park between 1998 and 2002, expressed his disappointment at the decision to relieve Smith of his duties so soon into the season and warned the club must make a swift appointment to avoid ridicule.

"I think Dean Smith had earned enough brownie points in the bank to be given a chance to turn things around if I'm being honest," Merson told Sky Sports. "Yes, they lost five on the trot, but I'm disappointed Villa have done that.

"If you sack a manager, surely you've got to have another one in place before your next Premier League game. In two weeks' time, if they haven't got a manager by then, that would be laughable."

Can Gerrard resist the pull of the Premier League?

Villa's search for Smith's successor has seen them draw up a shortlist which features Rangers boss Gerrard and Belgium head coach Roberto Martinez.

Merson acknowledged the difficulty Villa may encounter in attempting to lure Gerrard away from Rangers after he resurrected the club in recent years but believes the opportunity to manage in the Premier League could be too hard to turn down.

"It's going to be hard to prise Steven Gerrard away, he's managing a massive club in Glasgow Rangers," Merson added.

"He's got them buzzing again; he stopped Celtic winning 10 in a row, they are in the Europa League, and they've got a chance of winning the Scottish Premiership.

"It's a bit of a juggling act for Gerrard because Celtic look as though they are coming back now. They've got the new manager in; they've bought into his ideas and they are moving up the table. 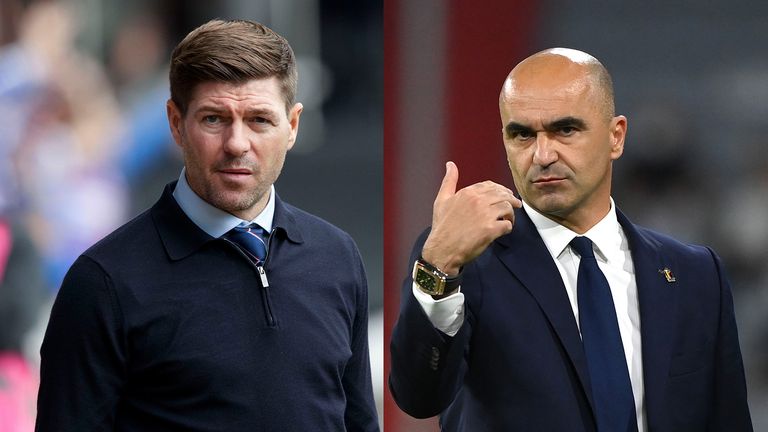 "There is no forgone conclusion in the Scottish title race this year and, given the nature of football, if Celtic went on and won it this year everything from the year before is almost forgotten.

"But it's the Premier League, and when you start out managing, I'm sure in the back of people's minds if you could get a job like Aston Villa - wow."

Merson believes Gerrard's former England team-mate Lampard has to also be under consideration for the vacant manager's position at Villa Park.

Lampard has been out of work since being sacked by Chelsea in January but Merson believes his proven track record of developing youth makes him an ideal candidate.

"I think you have to put Frank Lampard's name in the hat as well," Merson said. "He's managed Chelsea, where he did a great job in steadying the ship at the time.

"If you look at all the kids who have come through at Chelsea since, and then look at Aston Villa's academy, it's very good as well.

"On Friday night, Dean Smith had five or six players from the academy in the squad for what was his final game. I would like to see a Frank Lampard or Steven Gerrard get the job."

How often will a job like Villa come up?

Rangers manager Steven Gerrard would be a 'perfect fit' at Aston Villa and welcomed with open arms if appointed as Dean Smith's successor, says Lee Hendrie

Merson emphasised the importance of managers picking their next move at the right time and warned the opportunity to manage a massive club like Aston Villa seldom comes around.

"Management is all about timing. If you're rolling and you're the flavour of the month, you've got the take the opportunity," he said.

"Years ago when Sir Alex Ferguson was coming towards the end of his time at Manchester United, it was whether Steve Bruce or Mark Hughes would succeed him. If either of them had won 10 on the trot around that time they would have probably got the job - it's all about timing.

"It's like Patrick Vieira at the moment. I'm sure if Mikel Arteta hadn't won in 10 games everyone would be saying he had to take over at Arsenal, but at the moment Arteta is pulling up trees and doing great. If Arteta does ever leave Arsenal, Vieira might be in a situation where he has lost a number of games on the trot.

"It's all about timing, and I don't see how many times jobs like Aston Villa come up. I was fortunate enough to play for Aston Villa for four years, this is a big football club, a massive football club.

"If you live in the Midlands, I think you appreciate it more than people in London, Manchester, or Liverpool, but make no mistake, it's a huge club. If Aston Villa come knocking, it is a big opportunity."