Eddie Nketiah named as England U21 captain despite Arsenal 'frustration'

Eddie Nketiah says he is ready to take advantage of a "big opportunity" after being named England Under-21s captain.

The Arsenal striker will lead the Young Lions for the Euro 2021 group stage - which starts against Switzerland in Koper on Thursday, live on Sky Sports.

Nketiah has started just once for the Gunners this year - with Arsenal manager Mikel Arteta taking the blame for his lack of first-team football - and his last in the Premier League came in December.

He has played just one minute in the top flight since January and has not featured in Arsenal's last eight Premier League squads, but he is ready to perform in Slovenia.

The forward said: "It's been a difficult last month or so. I haven't played as much as I would have liked. I have been working hard and being dedicated which adds to the frustration but I have a great opportunity in front of me.

"Aidy (Boothroyd) has been really good with me and has been checking in on me. I have a big tournament ahead of me. In life there are always opportunities in front of you.

"The captaincy is a big responsibility. I'm grateful to have this opportunity, have fun and do my best to help the country achieve something special.

"We know how important it is to start off well, we have to make sure we are all at our best and if we get off to a good start it'll put us in good stead."

Nketiah scored 13 goals in qualifying to become the team's 16-goal record scorer and boss Aidy Boothroyd believes he is the perfect pick for captain. 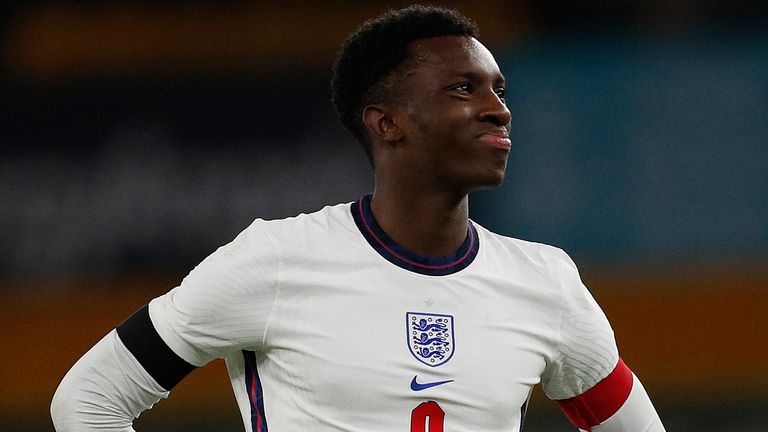 England under-21 boss Aidy Boothroyd says Arsenal forward Eddie Nketiah is undoubtedly the right man to be captain at the European U21 Championships.

"He is one of the leadership team, he is the record scorer which is huge when you consider he has beaten Alan Shearer," he said.

"He is very humble, hard-working and before you talk about his football and intelligence he is a good guy who everyone likes and respects. He was the right choice."

The Young Lions also face Portugal and Croatia in Group D in Slovenia and Boothroyd believes the nature of the tournament - split up amid the coronavirus pandemic and to avoid clashing with the rearranged senior Euros - will aid his side.

"The tournament comes at a time which helps us, the players are in a rhythm," he added, with the knockout phase in May and June.

"When I go through the squad the majority are all playing which really helps me because they can hit the ground running.

"We have to get past the group stages but it will help us. We have to get through April and qualify first and get to the knockout stages"

England U21s at the Euros on Sky: Hinchcliffe's preview

With the group stages of the 2021 European Under-21 Championships live on Sky Sports over the next week, Andy Hinchcliffe gives his verdict on England's chances.

He covers key men, a potential starting XI, the tournament split, and the tough group...

England's three fixtures will also be blogged live on SkySports.com and the Sky Sports App: