Manchester United qualified for the Europa League knockout stage as Cristiano Ronaldo marked his return to the side with a goal in a 3-0 win over Sheriff Tiraspol at Old Trafford.

After being dropped for Saturday's Premier League draw with Chelsea due to his behaviour in last week's win over Tottenham, Ronaldo was brought into the starting line-up by manager Erik ten Hag and scored the third goal of the game from close range after his initial effort had been saved (81).

Earlier, Ronaldo's Portugal team-mate Diogo Dalot had headed United in front from a corner on the stroke of half-time (44) before substitute Marcus Rashford doubled the lead with a powerful header from a Luke Shaw cross (65).

Man of the match: Christian Eriksen. 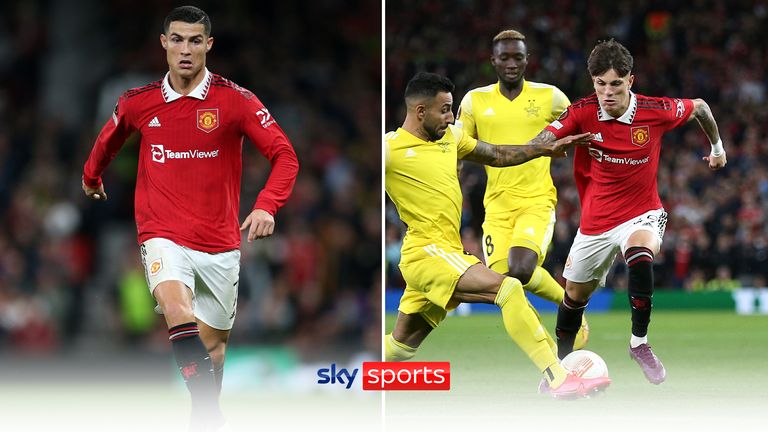 Asked about Ronaldo's performance after the match, Ten Hag told BT Sport: "Yeah, great. He created and the team creates for him.

"We know he has the capabilities to finish. He needed a goal to get over a dead point I would say and then more will come, I am confident of that."

The result sees United qualify for the knockout stage, but they must top Group E to avoid a two-legged play-off against a third-placed Champions League side in February.

Real Sociedad's 2-0 victory over Omonia Nicosia means United need to win by at least two goals in Spain on November 3 to finish first and automatically progress to the round of 16.

Keeping hope alive of winning the group was the focus at Old Trafford, where Alejandro Garnacho made his full debut and impressed to such an extent that he left to a standing ovation. United were on top from the outset and the 18-year-old received applause from Ronaldo after producing a stepover and darting forward before seeing a cross to the veteran cut out.

The frontman powered a header over and Bruno Fernandes bent wide from 20 yards as the onslaught continued, with Ronaldo's attempt to meet the stand-in skipper's cushioned header then thwarted by Maxym Koval.

Sheriff's goalkeeper denied Christian Eriksen from distance and Tyrell Malacia saw a fizzing low effort stopped before the visitors threatened a shock opener. There was collective intake of breath inside Old Trafford when Patrick Kpozo's superb cross from the left just evaded Ibrahim Akanbi Rasheed in the box.

Cristiano Ronaldo returned to Manchester United's starting line-up as Erik ten Hag made four changes to his side following Saturday's 1-1 draw with Chelsea in the Premier League.

Victor Lindelof replaced the injured Raphael Varane in central defence, while Tyrell Malacia came in for Luke Shaw at left-back.

Teenager Alejandro Garnacho made his first United start as he took Jadon Sancho's place on the left wing.

It would have been a huge moment in Sheriff's history, never mind the game, and appeared to spark United into life. Eriksen sent a corner from the left-hand side into the six-yard box, where Dalot directed home a header in the 44th minute. That goal allowed Ten Hag to make a pair of changes at half-time.

Lisandro Martinez was replaced by Harry Maguire, who came on for his first United appearance since the trip to Moldova six weeks ago, and Rashford replaced Antony. The summer signing's most discussed contribution from this match was his unnecessary showboating spins on the ball. 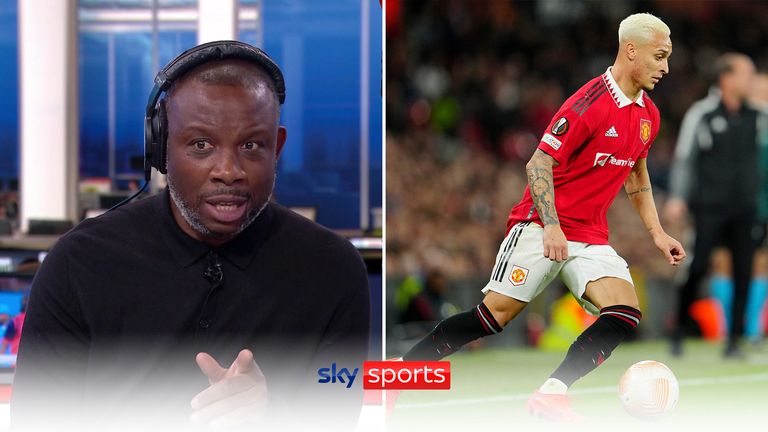 Leroy Rosenior was not impressed with Antony's showboating against Sheriff Tiraspol

The one-way traffic continued as Eriksen struck a free-kick into the Stretford End, which was again collecting the ball after Ronaldo cut inside and struck narrowly wide from the edge of the box. The 37-year-old stood with his hands on his hips in disbelief as 'Viva Ronaldo' began to echo around Old Trafford.

Further frustration followed for the Portugal international in the 61st minute as a move involving an exquisite Garnacho touch ended with him rifling home from close range, only to find out he had strayed offside. Ronaldo somehow avoided a yellow card for kicking the ball away in anger.

Scott McTominay and Shaw were introduced as United pushed for a second that the latter was key in, floating a fine cross from the left for fellow substitute Rashford to head home in the 65th minute. The World Cup hopeful saw a low shot pushed wide and Garnacho went close before leaving to applause from all inside Old Trafford.

Donny van de Beek came on for a rare appearance before Ronaldo gave fans the goal they had been waiting for in the 81st minute. Initially denied by Koval when found by a Fernandes cross, he fired in the loose ball to score his first Old Trafford goal since May and the 701st of his club career.

There were further United chances but no goals as the clock wound down on a straightforward win. The victory extends United's unbeaten run to seven games in all competitions and sets up a key clash in Spain next Thursday, when Ten Hag's side will attempt to usurp current leaders Real Sociedad in a Group E showdown.

Ten Hag: It was a focused victory

Manchester United manager Erik ten Hag told BT Sport: "It was OK. Of course, you hope you score in the first 30 minutes so it took a bit longer, but we deserved that goal.

"In the second half we scored two more good goals from open play and I'm pleased with the clean sheet because we gave nothing away. It was a focused win.

"Our occupation of space in the box could still be done better, the second and third goals we did that well. We occupied positions and scored." 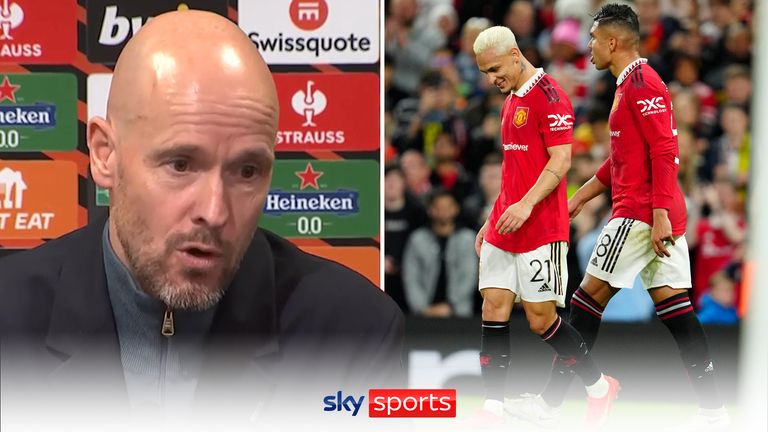 On next week's crucial trip to Real Sociedad, Manchester United forward Marcus Rashford told BT Sport: "We have to go there and win by two goals. We have to score goals but defend well. It is going to be a tough game but looking forward to the challenge.

"It's taken a lot of hard work to adapt and change, but we're getting there."

Those were the words of Erik ten Hag when confirming Cristiano Ronaldo would return to Manchester United's squad for Thursday's Europa League game against Sheriff Tiraspol.

Ronaldo had been dropped for Saturday's Premier League draw with Chelsea due to his behaviour in last week's win over Tottenham, but he was back in the side as United looked to qualify for the knockout stage.

All eyes were on the Portuguese superstar at Old Trafford. Eventually, he delivered.

The 37-year-old had looked set to be frustrated as he missed several chances and somehow avoided a yellow card for kicking the ball away after seeing a second-half strike disallowed for offside.

But his persistence finally paid off in the 81st minute when he smashed in from close range to score the 701st goal of his extraordinary club career.

"Back on track, with the same commitment and dedication as always," he said on social media before Thursday's match.

Ronaldo is and always has been a winner. Despite his petulance at times, he can still play a key role for Ten Hag in what is likely to be the veteran forward's final season at United.

And he will want to bow out on a high. He has an opportunity to add a new trophy to his incredible collection. The Champions League will always be Ronaldo's competition. At the end of May, though, the Europa League could be too.

Marcus Rashford staked a claim for a place in England's World Cup squad with an impressive second-half cameo. The 24-year-old's powerful header - his sixth goal of the season - doubled Manchester United's lead and he almost scored again later from long range.

Rashford's goal came from a pinpoint Luke Shaw cross, who delivered once more after being introduced in the 63rd minute. His recent performances suggest he is likely to be Gareth Southgate's first-choice left-back in Qatar.

There was also good news for United captain Harry Maguire, who returned to action as a half-time substitute after recovering from a muscle problem. Despite being booked, it was a much-needed 45 minutes for the 29-year-old. That will please England boss Southgate as he makes his final preparations for next month's tournament, which begins on November 20.