Manchester United Women will play at Old Trafford for the first time when they face West Ham in the Women's Super League on Saturday; United in battle with Arsenal for Champions League spot after 2-0 loss to Gunners last week 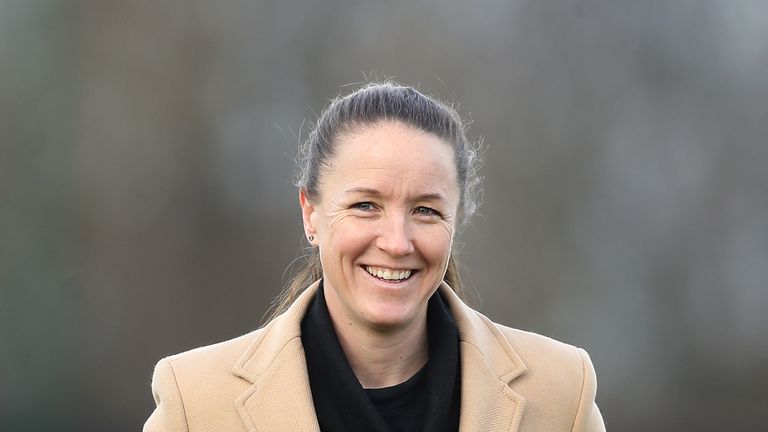 Manchester United Women boss Casey Stoney says her players need to turn their anger following their 2-0 loss to Arsenal into goals when they face West Ham in their WSL first-ever match at Old Trafford.

United hopes of Champions League qualification for next season were dealt a blow as Arsenal moved to within three points of third-placed United with a game in hand in the Women's Super League.

Stoney challenged her squad to show a reaction from the loss when they meet West Ham on Saturday.

Reflecting on last week's defeat to the Gunners, Stoney said: "It did hurt, it was a long journey home for everyone involved. We had two days off after that to reflect, but in conversations since they were angry. Now we need to turn that anger into performances and goals and make sure we can control what we can."

Stoney believes there are positives to take from her side's performance against Arsenal but insists her players were taught a "harsh lesson" by more experienced players.

"We can take positives from it. We won the ball back in key areas and created chances from it. They were fearful of the press and credit to them they adapted their game," she added.

"My take away is that we have to be harder to beat. If you are going to keep the ball you cannot concede within two minutes. If we had go to 60-70 minutes at 0-0, then they would have had to come out and opened up a bit more.

"It's all about fine margins, we created more chances against Arsenal than I have ever known and we didn't even test the goalkeeper. We dominated the possession but the only stat that matters is the scoreline.

"It's a harsh lesson. I thought it was a good performance up until the final third, that's where we let ourselves down."

'We need a win to remember Old Trafford experience'

Man Utd's WSL game against West Ham takes advantage of a gap in the Premier League schedule, allowing Stoney's side to move away from their regular home at Leigh Sports Village for a landmark game at Old Trafford on Saturday afternoon.

Stoney played down the importance of the occasion for herself, but accepts it is a "fantastic" opportunity for her players in what she expects to be a difficult game against a defensive Hammers side.

Stoney said: "As a club it is a big step, but for me as a coach it's green grass, white lines and two goals. I'm more interested in getting a win but for the players, it is a fantastic moment to be able to step out at Old Trafford and play. We need a performance, a win to remember it by.

"We left it optional for the players and did some familiarisation [at the stadium] today. We visited the changing rooms, saw the pitch, so there is nothing new come Saturday. Those that wanted came, we always leave it in the players' hands to do it how they want to.

"It's only an advantage if you win, it's a great occasion but we will be focused on how we can exploit them and nullify their threats.

"It will be a fantastic surface for us to play our football and move the ball quickly and break them down. They are defensive in a 5-4-1, it won't be easy to do that but I know we have players capable."

The Women's Super League will have a new home from next season on Sky Sports. From world-class stars like Lucy Bronze and Vivianne Miedema to the potential end of the 'big three' - Arsenal, Chelsea and Manchester City - there are plenty of reasons to be excited.

Here, we look at why you should watch the WSL on Sky Sports this September...