Lianne Sanderson: Celebrating lesbian visibility is important - just being yourself is so impactful

Being seen more on screen has been empowering for former England international Lianne Sanderson, who is among the DIVA Awards Sport category nominees in Lesbian Visibility Week - and she insists online hate will never stop her fighting for her community

Lianne Sanderson says she derives joy and satisfaction from celebrating the LGBT+ community in sport and refuses to be discouraged by "keyboard warriors".

The 50-cap England international is increasingly in demand on TV and radio and although she has not yet hung up her boots definitively, football broadcasting continues to offer her opportunities that are raising her profile with new audiences.

Bringing the same energy and enthusiasm that helped deliver countless career goals as well as honours with Arsenal, Juventus and the Lionesses, Sanderson has felt confident to be out publicly ever since her days playing in Women's Professional Soccer in the US - the forerunner of the National Women's Soccer League - in the early 2010s.

A long-time advocate for greater equality across society, she is among the nominees in the Sport category for the 2021 DIVA Awards which recognise the achievements and activism of LGBT+ women. The winners will be announced on Thursday as part of Lesbian Visibility Week.

"People often say, 'why do we still need this? I don't really care if you're gay or straight' - but there are still some that do care," she explained.

"It's important for people like myself to be visible in the public eye and stand up for what's right. That's what I'll always do for my community.

"These kinds of weeks, Rainbow Laces, all the campaigns - I think they're really good. We've still got a long way to go, but we have to be celebratory too about the place that we're at.

"Women's football is on the rise, there's more visibility there, and when I see those captains wearing the rainbow armbands, it makes me happy. Long may it continue, and I'm going to keep being outspoken in the way that I am." 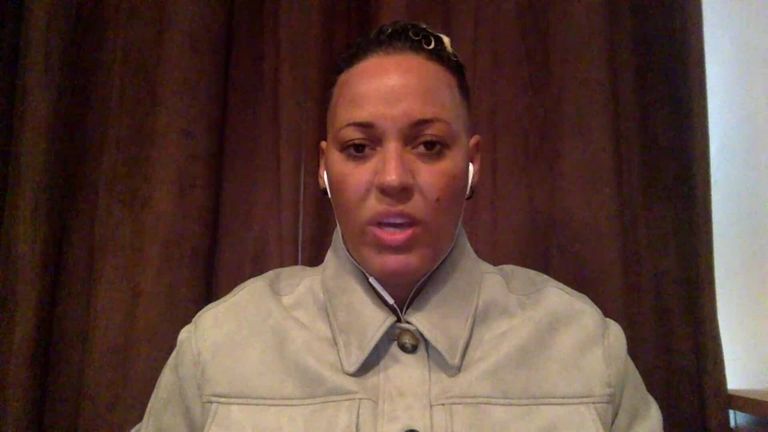 Sanderson recently posted examples on social media of homophobic and misogynistic abuse she has received, and she believes this weekend's forthcoming boycott of platforms by organisations and clubs across football was "inevitable".

"During lockdown, it seems as if the keyboard warriors have got behind their computers even more," she told Sky Sports News.

"Even myself last week, again I was abused, and that account is still up there.

"People forget because we're in the public eye, but we are still human. They might say, 'just turn a blind eye, don't look at it' - but once you've seen something, you can't unsee it."

She hopes the mobilisation and show of solidarity makes an impression on the social media companies. "It seems like if you hurt people in their pockets when it comes to finances, that's the only way you can do it.

"Look at the Super League. Within two days, football was able to stamp that out because of the fans and the pundits.

"For footballers to have to play the game that we love and get abused while they're doing it, it is absolutely shocking. Hopefully, this can make a change - but the conversation needs to continue."

Sanderson says she is grateful that she was never burdened by her sexuality as she always felt supported by friends and family. Having spoken to others - including in the women's game - who have struggled with being LGBT+, she is committed to being authentically and unapologetically herself.

"You don't realise how impactful you're being, and I see that as a win," she says.

"The letters and messages that I get from kids, and parents - it's amazing. You can actually see the amount of people you can help.

We've still got a long way to go, but we have to be celebratory too about the place that we're at.

"I do wish that more players would come out, not that it makes me stronger as a person but because carrying that weight on your shoulders is not the easiest thing to do.

"I'm lucky I didn't have to do that but I've got friends who knew they were gay from aged five, and they've carried it around their whole life. Hearing their stories - and some had suicidal thoughts, or depression - I just think it makes such a difference.

"I'm just glad I have the platform that I can speak out and help people. I've seen the impact you can make by just being visible and being yourself. With that comes negativity as well but I'm not wrapped up on that - if people want to have an opinion of me, then that's down to them.

"But if I can help one person, then I've done my job. I thought being a footballer was more than enough but I realise now, after not playing and having seen the amount of impact I can have in people's lives, that means more to me than ever winning a medal or a trophy. I never thought that would be the case." Sanderson, who won the Quadruple in the women's game in 2007, passes on her advice for younger female athletes who are also LGBT+

Sanderson appreciates how the intense pressure and focus on male professional footballers makes the prospect of coming out publicly incredibly daunting for any who are gay or bisexual. Though Robbie Rogers and Thomas Hitzlsperger both shared their truth having played in England, no player in the men's pro game in the UK has yet done so while contracted to a league club.

"When you're the first, that will always be a topic of conversation," says Sanderson.

"The first male player that comes out, there's going to be a lot of media attention - that's just how it is - but it can also create an environment where more people can follow suit. Education is key." 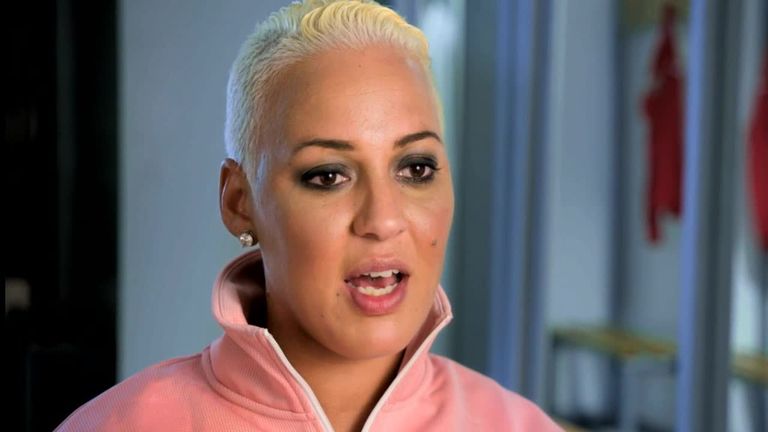 With the next men's World Cup to be held in late 2022 in Qatar, where homosexuality is illegal, there is sure to be even more discussion around LGBT+ inclusion in football in the coming months. Sanderson has visited the Gulf state three times and she shared her experiences in the Sky panel event.

"I've had the opportunity to go there and work. If I'd got there and felt scared, then I'd have got on the first plane back," she said.

"They opened up the main Khalifa stadium for an all-female camp - it had never been done before. Some of the girls didn't want to be on camera because their parents didn't even know that they were going to be at football. But they all had these amazing stories.

"There's a lot of negativity around the Qatar World Cup and I understand why completely. But the work I was able to do there, I think it made a difference. I can honestly say I had one of the best experiences there - I felt welcomed - even though I want their rules to change, obviously.

"Hopefully seeing somebody like me, seeing that I'm OK and that it's OK to be who I am... I'm as respectful of their culture as they are of me. Even a man and a woman can't hold hands and kiss each other in public in countries like Qatar or Dubai. But you can change the perception by being who you are."

It's far from a perfect world, but you can guarantee Sanderson will take her optimistic, big-hearted worldview into every studio and every situation. It's more than just visibility, it's joie de vivre. "I want people to feel empowered, not pressured, by what we're saying. I think we're in a good spot."

Lesbian Visibility Week runs from Monday, April 26, to Sunday, May 2.