Gary Neville says he is "surprised" if Jose Mourinho has criticised Chris Smalling, but thinks Luke Shaw needs to mature at Manchester United.

Mourinho appeared to be critical of Smalling and Shaw when he said after the 3-1 win over Swansea on Sunday that he only wants players who are willing to put their "bodies on the line".

Both Smalling and Shaw were left out of the squad for the match due to not being 100 per cent.

Former Manchester United defender Neville worked with Smalling for several years while he was assistant manager with England.

"I find it difficult to believe he has ever been anything other than completely committed to wanting to get out on the training pitch every day," said the Sky Sports pundit at the Red Bull Street Style event, where he was a judge. "So I am not quite sure what Jose has seen, but he is the manager of the club and has to make the calls he sees fit.

"Having worked with him for four years he has always been incredibly impeccable and trust worthy, someone I always felt would run through a brick wall, so I am surprised by that one."

Shaw joined United in 2014 from Southampton but has only returned to the first team this season after breaking his leg last September.

"I think Luke is a more complex character," said Neville. "He is young, has moved away from Southampton, and he needs to mature physically and mentally. 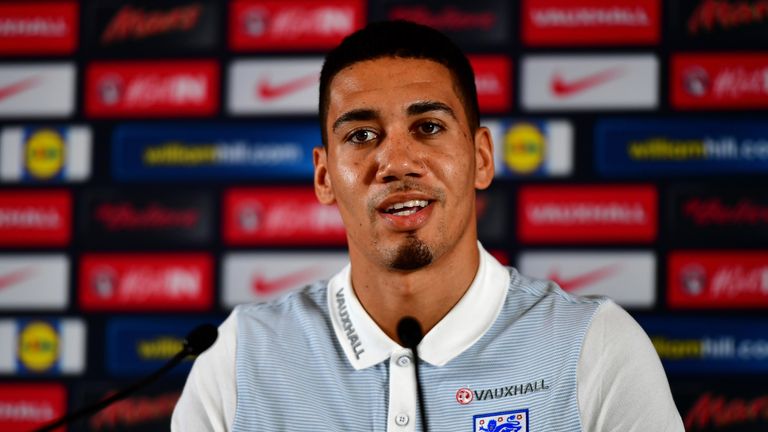 Having worked with him for four years he has always been incredibly impeccable and trust worthy, someone I always felt would run through a brick wall, so I am surprised by that one.

"He is such a huge talent but obviously has had injury problems and is not over them from a mental point of view and he needs to work on that.

"He is a young person with big expectation, but he is now in the spotlight at a big club, and Manchester United doesn't take prisoners.

"Jose Mourinho won't either because it will be him or the players that are going to survive and he doesn't work on the theory it will be the players.

"Jose is looking to make his name at Manchester United and he has to make sure he has the players alongside him he wants."

Former Celtic striker Andy Walker told Sky Sports News HQ that he thinks Mourinho is trying to force Smalling and Shaw out of the club.

But Neville said: "As a manager you pick the players who are available to play and trust in them.

"They were very strong comments, he sees things on the inside and, having being part of coaching teams in the last three or four years, when you see things you are not happy with, it's not always apparent to the public on the outside."