"If you take out that Alisson mistake, it was men against boys"

Speaking on the Gary Neville Podcast, the Sky Sports expert believes it may have reached the stage where Jose Mourinho is selecting players based on those he can trust over technical ability.

Neville also claims the club may have lacked belief in Mourinho during the summer with the Portuguese feeling he was not backed in the transfer market to sign a central defender after a second-place finish last season...

It's what I feared would happen. I spoke to some United fans this morning, and we were living in hope based on the record of the past couple of seasons.

Jose Mourinho has historically been able to put a masterclass together, and get a point away from home.

Everyone fancied Liverpool to win, and sometimes when you have that feeling going into a game, you're hoping the players are thinking, 'let's show them'.

I have to say, if you take out that Alisson mistake, it was men against boys, wasn't it? There was only really one good team out there. 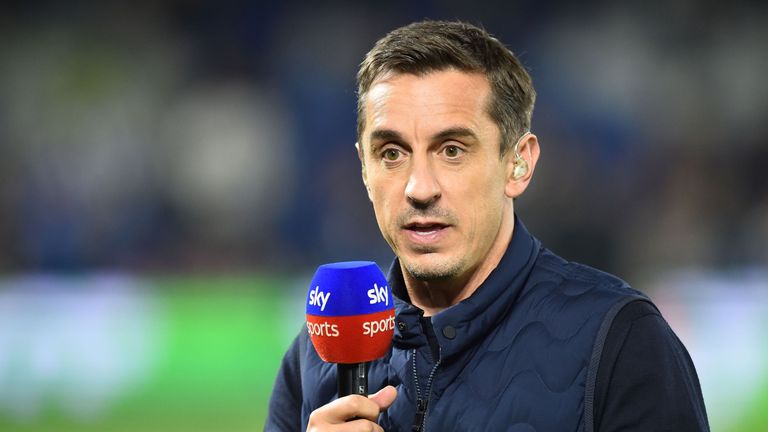 It feels like every match is an event. It feels like they're crawling on their hands and knees from minute to minute.

Liverpool are a good team. They're a team who are playing a level of football that I called on Monday Night Football this week 'Championship-winning football'.

Their only real problem is that they've got a great side coming up against them in Manchester City. But from Manchester United's point of view, it feels that every two-three days is a crossroads.

It feels like every match is an event, it feels like they're crawling on their hands and knees from minute to minute.

It got to the point when I was manager for four months when I thought I might as well pick the players that I liked and that are honest, and it gets to that point sometimes.

It must reach a point when a manager does think, 'to hell with the price tags and what the weekly wages are, I'm just going to pick the ones I like'. It feels like Jose has got to that stage in his cycle as Manchester United manager.

Gary gives his verdict after Manchester United are beaten 3-1 against Liverpool.

Forget Pogba, forget all the talent on the bench, I'm just going to pick the ones that I trust, who have done a good job for me, who have turned up day in, day out - but it's a real mess.

It just feels like the club is stuck, and there's nothing happening. There's just so much noise from the dressing room, in the newspapers, in the media.

I'm not sure if the boardroom is gasping every time Mourinho sits down for a press conference, wondering what he's going to say next. They've lost control of that situation, and I don't know how this plays out, I have to say.

Sometimes when you lose at Liverpool, emotion can take over, but this has been coming for a month, two months, three months, four months now.

Today, they're poles apart in every department, Liverpool and Manchester United.