Manchester United will now find it incredibly hard to ignore Ole Gunnar Solskjaer's claims to be the club's manager on a permanent basis, according to Gary Neville.

Solskjaer is unbeaten in nine matches - eight of which he has won - since taking over in a caretaker capacity from Jose Mourinho at Old Trafford in December. Highlights from Manchester United's draw against Burnley in the Premier League.

If the Norwegian continues this winning run between now and the end of the season, he will leave United's hierarchy with a real dilemma when choosing the club's next full-time manager this summer, says Neville.

"It will be hard to ignore him," the former United and England captain told Sky Sports News. "Ultimately, what Man Utd were going to do six weeks ago was to scour Europe for one of the best managers in the world to take over in the summer.

"Because if Ole has the fans on his side, the players on his side and most importantly he has got the results to the level they have got now, then it will be incredibly difficult for the board at Man Utd to look anywhere else.

"However, if they have got one of the best managers in the world secured as well, then there is that dilemma as to whether they go with that. They have tried that the last couple of times with Louis van Gaal and Jose Mourinho and it did not work out.

"So I think that Ole is in with a real shout, particularly with the results so outstanding, the football is better and the fans feel a lot better over there at Old Trafford and the judgment should be made in March, April, May and not really for today.

"But he has a far better than he had six weeks ago."

Another positive for United was Anthony Martial signing a contract extension until June 2024, with the option to extend for a further year, on transfer deadline day.

Neville, though, wants the France international to now provide United with a return on their investment. 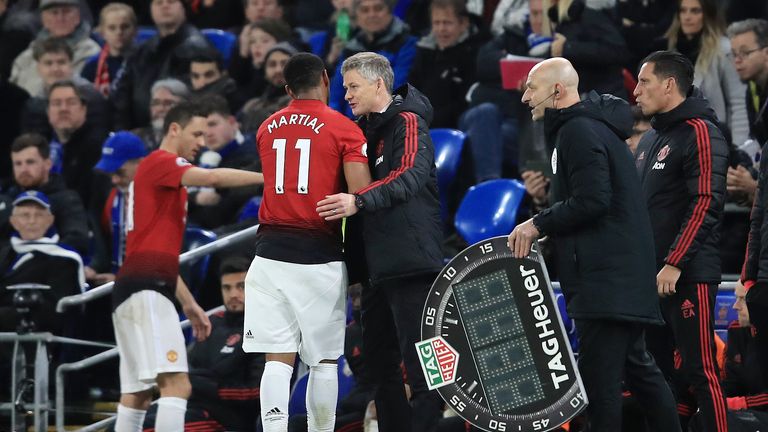 "It would be too big a risk to let someone of that potential and promise (to leave)," he said. "He is still at a good level, his assists and goals record are not bad, but there is a lot more to come from him.

"This contract is a reward for him and he now has a manager who believes in him and is playing him in different positions and making him do different things.

"From United's point of view, they now need a return on that investment and that promise and potential that he has shown in glimpses and moments in the last three and a half years to now become a consistent set of performances that will mean he becomes one of the best players in Europe in his position."