The fact Liverpool have played a game more than Manchester City is a good thing for their Premier League title hopes, says Gary Neville.

Liverpool went back to the top of the Premier League with a 2-1 win at Fulham on Super Sunday, with City in second having played a game less.

Their game in hand is not until April 24, at Manchester City on Sky Sports Premier League, while City also have an FA Cup semi-final in early April on the same weekend Liverpool play at Southampton, also on Sky Sports.

Speaking on the Gary Neville Podcast, the Sky Sports pundit believes this can only be a good thing for Liverpool, and could mean they step clear mentally in the title race. 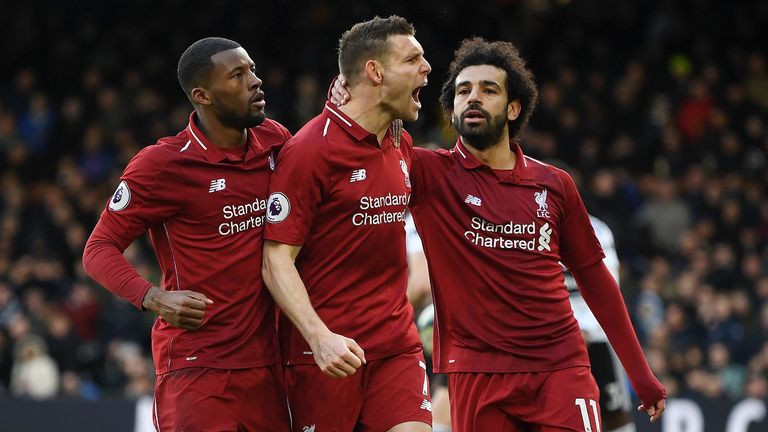 "They'll have known that was a big moment. There will be times where Liverpool drop points before the end of the season, so too will Manchester City I think, but it couldn't be on Sunday against Fulham.

"Manchester City's game in hand is at Manchester United, at Old Trafford, on April 24. There's an opportunity for Liverpool here to step clear, with City not catching up for a few weeks, with the added complication of an FA Cup semi-final too. It's a good thing for Liverpool, I believe.

"They had to win today. It wasn't vintage Liverpool, after the week they've had, it would have taken a lot out of them.

"Even though Fulham are poor, with respect, it was all about the win today. It could have gone wrong; the mix-up between Alisson and Van Dijk, and dropping two points, would have damaged them mentally. So to get the victory was big."

"People will point out if they don't win the league or Champions League that it's another year without winning a trophy, but each year they have got better and better. They have made a quantum leap this year by signing Virgil van Dijk and Alisson.

"They both got it wrong today for the Fulham goal, but I can't remember another time that has happened. They have been fabulous all year. Liverpool are a serious team now.

"Nobody would want to play them and think they would have an easy ride and could boss them in any department. Great defensively, workaholics in midfield and three up front that can hurt you."