"The first half is one of the best we ever played. We played an incredible game in the first half. I loved each second of it," Jurgen Klopp hails Wembley heroics as Liverpool reach first FA Cup final of his tenure; Man City boss Pep Guardiola jumps to defence of goalkeeper Zack Steffen

Jurgen Klopp branded Liverpool's thrilling FA Cup semi-final victory over Manchester City as one of the greatest performances of his tenure at the club.

Liverpool reached the FA Cup final for the first time under Klopp thanks to a devastating first-half display at Wembley, where the Reds led 3-0 at half-time thanks to Sadio Mane's double and Ibrahima Konate's headed opener.

City broke free from Liverpool shackles after the break. Jack Grealish reduced the arrears within seconds of the restart before Bernardo Silva's late strike set up a tense finale, but Klopp's side advantage proved insurmountable as the Reds maintained their bid for an unlikely quadruple.

"I think it was [one of our best performances]," Klopp said. "That was the feeling I had when I saw the first half because of the quality of the opponent.

"We did all the right stuff, we scored in the right moments; we played an incredible game in the first half, I have to say. I loved each second of it.

"To deny them in so many moments is so difficult, as is creating your own opportunities against them. The first half was outstanding in pretty much all parts of the game. The second half they scored an early goal, like we did [at the Etihad], and then the game opened up.

No footballer on the planet is safe against City with a 3-1 lead, it is always clear what they can do. We needed Alisson, what a game he had, but we had our moments as well, and could have decided the game earlier. We didn't do it, but that made the game even more special, 3-2 was a fair result and it was good enough to bring us to the final."

Saturday's triumph at Wembley kept Liverpool's bid for an unprecedented quadruple on track while ending City's hopes of a treble of their own.

With the League Cup already in the bag, a place in the FA Cup final secured, a Champions League semi-final showdown with Villarreal booked, and with just a point between themselves and City at the top of the Premier League, Liverpool could produce a finale like no other to this season, but Klopp was eager to downplay their chances.

"You can mention it how many times you want, it doesn't make it more likely," he replied when asked about Liverpool's quadruple hopes. "A game like today shows even more how unlikely it is.

"To go through against City is incredibly difficult and intense, and in three days we play again against Manchester United. They will be on their toes, and it is historically not a friendly game.

"We came here, we wanted to go to the final, we knew about the problems, but with the quadruple, qualifying for this kind of final makes it even more difficult. It is the only way to do it, but it makes it more difficult as well. It is a strange situation, but we are over the moon. We beat the strongest football team in the world and that is a pretty special moment."

Guardiola defends Steffen: 'It was an accident' 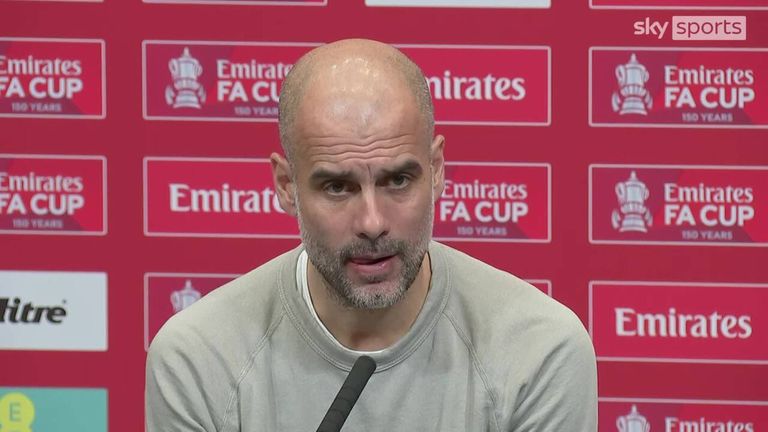 Pep Guardiola reflects on his side's 3-2 loss to Liverpool in the FA Cup, having gone 3-0 down by half-time.

Pep Guardiola jumped to the defence of Zack Steffen after his error gifted Liverpool their second goal.

The goalkeeper, selected ahead of Ederson at Wembley, dithered on the ball from a John Stones backpass shortly after Konate's opener, allowing Mane to bundle the ball into the net.

"It was an accident," Guardiola told the BBC after the game. "One of the strong points is try to play [out] and as a keeper he has this quality.

"It was an accident and he will learn for the future. When the ball is there, it can always happen. I have spoken with the team, not him personally, but he is strong."

Guardiola fielded a much-changed side after Kevin de Bruyne and Kyle Walker suffered injuries against Atletico Madrid on Wednesday and claimed Riyad Mahrez and Rodri were the only players on his bench fit enough to actually come on.

"When you play a lot of games, and you continue to do it, always these kind of situations can happen," he added in his press conference.

"The game in Madrid was really tough for us. We tried to put energy in the team but sometimes the opponent is good too.

"In the second half we found a goal, which helped us a lot with our momentum. They continued to play at a good level but we had chances and the game was there."

The FA Cup final will be played on May 14, with Liverpool facing the winner of the other semi-final between Chelsea and Crystal Palace.