Sky Sports pundit hails Arsenal striker after match-winning double against Everton - but can the Gunners keep him? 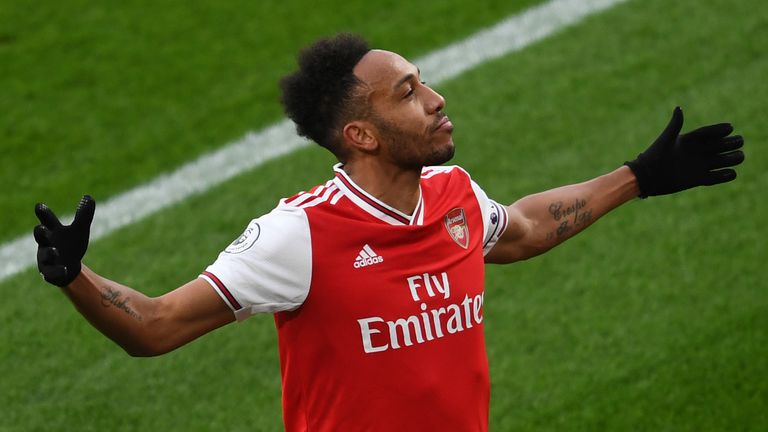 Pierre-Emerick Aubameyang deserves to be considered world class, according to Gary Neville - with the Sky Sports pundit admitting he is among the doubters who have been won over by the Arsenal striker.

Aubameyang's double against Everton in the Gunners' 3-2 victory over Everton propelled the 30-year-old joint-top of the Premier League goalscoring charts with Mikel Arteta afterwards hailing his captain as "our most important player."

Neville believes Aubameyang's ranking among the elite deserves to be re-evaluated.

"I feel that Aubameyang doesn't get that same credit and maybe it's something that comes from when he first entered into English football. It was a case of, 'why didn't any of the top clubs want him? How did Arsenal get him? Is there something wrong with him? Why didn't [Jurgen] Klopp take him to Anfield?' All these questions were being asked. I asked them myself.

"But now we're talking about a really high level of performance over a couple of years and [against Everton], I thought it was a brilliant performance from him. Not just his goals, which he took really well, but also the shift that he put in."

'He's everything you would want'

Arsenal have been criticised for a number of years over a perceived lack of leadership in their squad, but Neville insists Aubameyang is everything you would want as a leader and a character.

"You talk about Arsenal lacking characters and lacking leadership, I think this guy has everything you would want," the former Manchester United defender told Monday Night Football.

"He works hard off the ball, he works hard on the ball and if you look at his minutes per goals, and this is Premier League history, Aguero is at the very top, there's Harry Kane and Thierry Henry, and he's one minute behind Henry. He's also ahead of Mohamed Salah, Ruud van Nistelrooy and Gabriel Jesus, who has got a great record at Manchester City.

"This performance from Auabmeyang is unbelievable over two-and-a-half years. He's not mentioned as world class, we don't mention him as a Premier League great, but I think we have to."

Despite also being the Premier League's top scorer last term, Aubameyang has often been positioned on the left of a three-man attack this season, and Neville was full of praise for how the 30-year-old has adapted to his new role at the Emirates Stadium.

"I thought it was a test when Mikel Arteta took over and put Aubameyang out on the left," Neville told Monday Night Football. "Will he throw his toys out of his pram?

"He had this reputation when he came over from Borussia Dortmund that he might be a little bit difficult. We asked the question, why isn't Jurgen Klopp signing him? That's because Klopp knew him from Dortmund. Why aren't other managers who need strikers interested?

"I didn't know how he would adapt to being told to go and play on the left-hand side - and the idea of doing a shift there when you think you're the top man and you're the goalscorer - but he seems to have really bought into it. He doesn't look like he has been a moment's bother since he's come to Arsenal, so all the suggestions that he could have issues off the pitch have not materialised.

"I think the doubts have got to be removed now on Aubameyang," Neville added. "I feel he doesn't get appreciated anywhere as near as much as he should do. I think it's getting to the point now where you could argue that he is the top goalscorer in the Premier League over the last couple of seasons.

"He's one of the best players we've got in the Premier League, but for some reason he doesn't quite get the credit and the plaudits that others get. I think even Marcus Rashford and Anthony Martial get more air time than him because of the Manchester United link but his quality performances are at the highest level.

"We're all guilty of it but I think he's been absolutely sensational, and he now needs to be given the credit he deserves.

"I don't know why that is, but we're all guilty of it. I think he's been absolutely sensational, and I think now's the time for us all to start recognising the quality and the brilliance of this player. He fights for the team, he's always there, and for me, he's everything you would want in a football player."

But can Arsenal keep him? 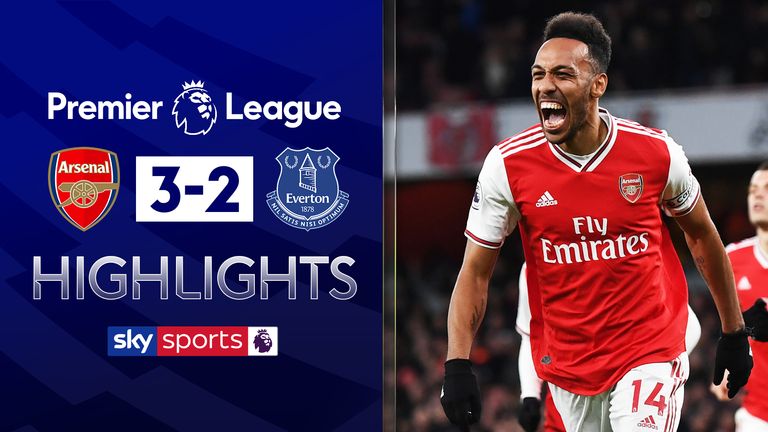 FREE TO WATCH: Highlights from Arsenal's win over Everton

Aubameyang's stunning form will not have gone unnoticed across Europe, however, and Arsenal's next challenge will be to persuade their captain to recommit to the club before his existing deal expires next summer.

"We have to try to support him and try to give him everything as a club so that he feels fulfilled here. That is the challenge we have.

"He needs to feel fulfilled, when he does that, we show appreciation too. Unfortunately, we are not that good that we can allow players not to do that [just score and not work]."