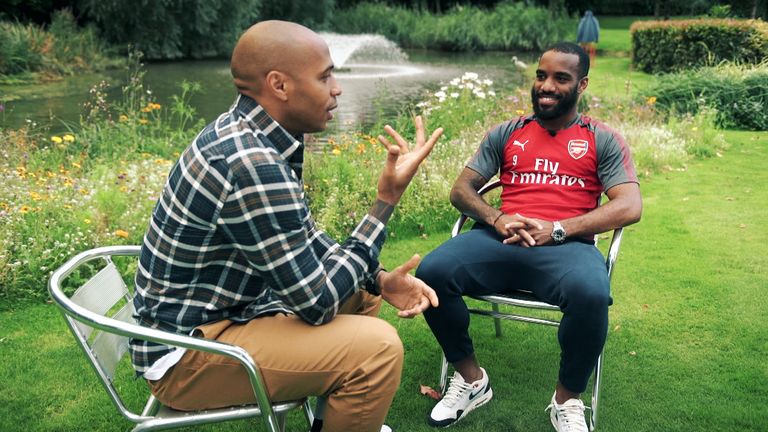 Ahead of Arsenal’s Super Sunday showdown at Liverpool, Gunners legend Thierry Henry meets summer signing Alexandre Lacazette to talk the lure of the Emirates, his ambitions for the season and why he is convinced he can play with Olivier Giroud.

Thierry Henry: Alexandre, thank you for welcoming me to your place. Now this is your place.

Alexandre Lacazette: No, it's still your place.

TH: No, it's your place now. I want to ask you something to start. I followed the transfer saga. What happened with Atletico?

AL: There were talks and it was going rather well, but we all know nothing is done until you put pen to paper. There were discussions that didn't go all the way and then Arsenal came into the equation and of course I chose Arsenal.

TH: Why Arsenal and why England? I don't know if many clubs were in for you, but I imagine they were. Why did you choose Arsenal and England?

AL: Arsenal are an historic club. The boss has been here for such a long time. So there's a real level of stability at the club and there haven't been many changes. He knows what he wants to achieve in the coming years. I liked the way he spoke about football and what he thinks of me. He made a big effort to explain why he wanted me and what he wanted from a striker which fitted with what I was looking for. He managed to convince me that I'd be able to make progress here.

AL: It's true. It's true that I score a lot of penalties. If referees give us penalties and the coach names me as the penalty-taker, I have to take them. That doesn't mean that I'm going to score them. Many people think it's easy to score them, but that isn't the case when the pressure is on.

TH: We're going to get a bit more stuck into the game now. I was lucky enough to see you progress as a young player. I remember that Francis Coquelin used to talk to me about you all the time: "We've got a really good player, he'll be really good, you watch." I took a look and I could see at the start the way you pressed and worked for the team - and I went through all that myself - and now I can see another Alexandre Lacazette who has improved considerably in that side of the game. Do you think people notice that or do they still focus on the Lacazette who didn't cover much ground or get back and only wanted to play when on the ball?

AL: Some people have noticed. I can't put everyone in the same bracket, but many haven't got over the old Lacazette and the perception that I was a bit of a lazy striker who didn't really work hard for the team. At least I thought I was working hard, but I didn't really know how to help my team-mates. I had many discussions about it, particularly one in the United States when we saw each other. During pre-season at Lyon, Bruno Genesio spoke to me a lot and showed me many videos to show me what he expected from me, and there was a moment when it clicked and I understood exactly what he wanted from me defensively as his centre-forward.

TH: I want to go back to something else from when I watched you play which I think is normal when you're young because sometimes you get caught up with nutmegs and what you think is attractive, rather than being clinical. When I watch you now, you certainly are a ruthless finisher. I see it in your eyes and I think that change has occurred over the last two years. Something has changed.

AL: Yes, in terms of adding fancy touches and pleasing the crowd. I think that everyone needs to perform their own role. Some of us are here for that: to make the game a spectacle and create danger. That often applies to wide players, but as a number 9, I have to be there to score goals, but that isn't the only thing. I also participate in the build-up and help my team-mates, but above all, it's about scoring goals.

TH: There are strikers who would say, 'No, I have to score. Playing well for the sake of playing well isn't my role, I have to score, I'm here to score'. Do you think that strikers are sometimes overly judged on their goals? We know that when you get there, either you score or you miss. But can you play well and not score? Can Alexandre Lacazette do that?

AL: Yes, of course over the course of a season I have to score goals and that's what statistics reflect. There are games where the striker will be useful for the team in terms of creating space and being involved in the game, without necessarily scoring. But he'll have played an important role for the team. I don't think we have to score in every game in order to have a good game.

TH: Are assists important to you?

AL: Yes, they are important, although less important than goals in my opinion. They are still important because a pass can set up a team-mate. An assist is when a team-mate finishes it off rather than just going close and the shot goes wide or ends up in the crowd. I don't know if you get what I'm saying.

TH: Yes, I get what you're saying about a pass that really creates a goal. I see. I'm going to ask you another one. How do you think you can make Arsenal progress? What are you going to bring in order for this team to win the league title?

AL: I'm going to try to score lots of goals.

TH: I prefer that!

AL: I'm going to score goals at key times in the games where the team may have struggled in previous years. This season I'm going to help this team win them and that's what Arsenal have to do: win games and trophies.

Who will score the most goals between Daniel Sturridge or Lacazette? Nigel Winterburn has his say...

TH: If you allow me to ask this one… When you signed for Arsenal, there was something that came straight to mind: I said to myself that you're Olivier's [Giroud] understudy for the national team. But at the moment, he's behind you in the pecking order at club level. How is that for you? How does that affect discussions between yourselves and others? That happens at every club. It seems almost contradictory because it happens so rarely. How are you both coping with that and you personally?

AL: To be honest, I was surprised by the way Olivier welcomed me to the club. I was somewhat apprehensive because it isn't always easy for a starter to step aside. He's been really honest and has helped me at the club and in the city by giving me advice. We get on well and have a laugh together, so there's no problem. The decision is down to the manager. It isn't up to me. I think competition is healthy and if he gets the nod on the weekend, I wish him the best of luck, hope that he performs well and that we win the game. He always has something nice to say to me ahead of each game.

TH: That's good. I'm not the Arsenal manager, far from it - but do you think that you could play up front alongside Olivier?

AL: Yes, we can play together, especially because our games are very different. We can complement each other. We managed to do just that towards the end of the Leicester game when he came on and I tried to play my game in and around him. I think that we certainly can.

AL: I can't wait. I think the atmosphere there is fantastic. So many people have told me that it's one of the best stadiums in England.

TH: I can confirm that.

AL: I know they are a very good side and I saw that in their game against Hoffenheim, in terms of the way they press and go forward. I can't wait to face them. I came here to play in this type of game and they seem to take place almost every weekend. This is the type of match that I want to be part of.