Jurgen Klopp: Emma Raducanu is the 'talent of the century' after US Open win

Liverpool manager Jurgen Klopp reveals inspiration from watching 18-year-old Emma Raducanu's US Open win: "I will watch women's tennis much more, for sure, than I did in the last few years" 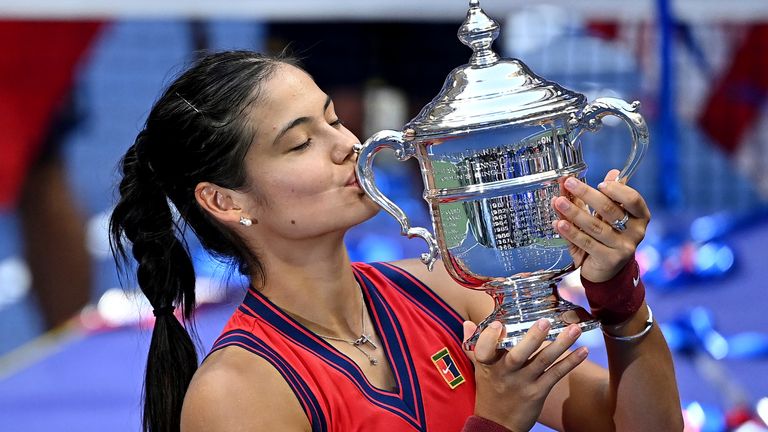 Jurgen Klopp has described Emma Raducanu as the "talent of the century" and says he will watch more women's tennis after the 18-year-old's US Open win.

The Liverpool manager halted his preparations for his side's 3-0 win over Leeds on Sunday to join the millions watching on Saturday night as Raducanu became the first British woman to win a Grand Slam singles title since 1977 by beating Leylah Fernandez.

Teenager Raducanu is also the first qualifier to win a Grand Slam title, but Klopp was most inspired by the humility of both players after the result.

"It is long ago I watched a full tennis game and I was impressed by the power, the speed and the whole game," he said.

"Women's tennis is obviously in a brilliant moment. These two girls, 18 and 19, what they showed in the game was massively impressive, but then when they got the trophies during the ceremony, both girls how they spoke was really inspiring, to be honest.

"Even more so than the tennis which was inspiring enough. I was absolutely overwhelmed by the way they presented themselves. Fernandez was obviously disappointed and Emma showed great respect for her.

I will watch women's tennis much more, for sure, than I did in the last few years.

"They knew they will face each other in the future very often and be in many more finals. I wish that for them. It was a great show of sportsmanship and elite sport and how humble you can be, so young on top of the world.

"When you are 18-years-old and win the US Open it can only come from hard work. She is for sure the talent of the century, but without hard work it is not possible to be there and doing that.

"Now she is there and you see her smiling during the game, it is the nicest thing I can imagine. I will watch women's tennis much more, for sure, than I did in the last few years."