Unbeaten Spain and Germany are both in Nations League action on Tuesday, live on Sky Sports, as they face Ukraine and Switzerland respectively.

Werner to start for Germany against Switzerland? Team news - Germany: Manager Joachim Loew has ruled out any wholesale changes following Germany's first Nations League victory of the new campaign last time out after two 1-1 draws in September. Illness meant Chelsea's Timo Werner missed out against Turkey before making a 10-minute cameo against Ukraine, but usually a regular at international level, he could feature more prominently on Tuesday.

Team news - Switzerland: After returning a negative coronavirus test, Liverpool's Xherdan Shaqiri made an appearance off the bench against Spain having missed a friendly defeat to Croatia due to self-isolation. He could come into the XI for the trip to Cologne. However, Borussia Dortmund defender Manuel Akanji will miss out following a positive test.

Player watch: Germany almost changed their entire XI between their friendly against Turkey and 2-1 win against Ukraine. Kai Havertz got two assists in the 3-3 draw last week and made a late substitute appearance in the Nations League fixture. His Chelsea team-mate Antonio Rudiger also picked up an assist in the last game with Matthias Ginter and Leon Goretzka on the scoresheet.

Mario Gavranovic has scored Switzerland's only goal of the current international break so far and was assisted by Arsenal's Granit Xhaka. Newcastle defender Fabian Schar has also played in both games after returning from injury. 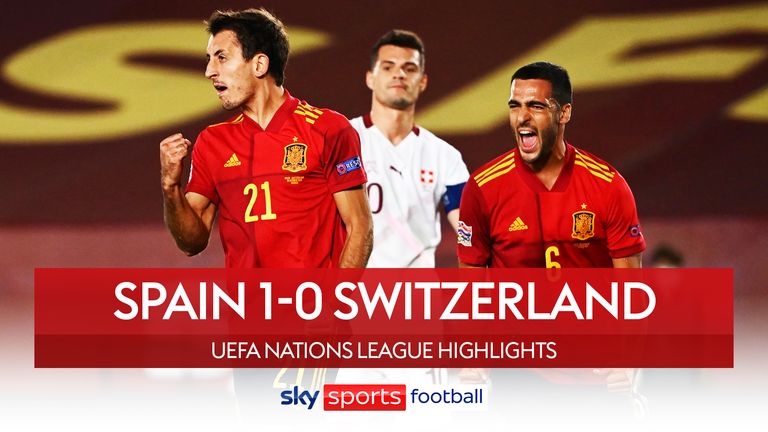 Team news - Ukraine: Andriy Shevchenko has a number of players absent due to coronavirus restrictions, while Yevhen Konoplyanka and Oleksandr Zinchenko have been left out due to injury. Ukraine were thrashed 4-0 by Spain in the Nations League last month and have never beaten the former World Cup winners.

Team news - Spain: Sergio Busquets and Dani Olmo are the only players to have started in both Spain games so far, but could be rested for the trip to Kiev. Arsenal midfielder Dani Ceballos could come into the XI, having started in a 0-0 friendly draw with Portugal. Tottenham's Sergio Reguilon also dropped to the bench against Switzerland from that game.

Player watch: Wolves' Adama Traore has made substitute appearances in both matches this month, although it remains to be seen whether he impressed enough for a starting spot.

Ukraine captain Andriy Yarmolenko started in the 2-1 defeat to Germany on Saturday and expect the West Ham forward to be included once again.

All other Nations League games on Saturday will be available on Sky Sports Football, via the red button or the Sky Sports app: