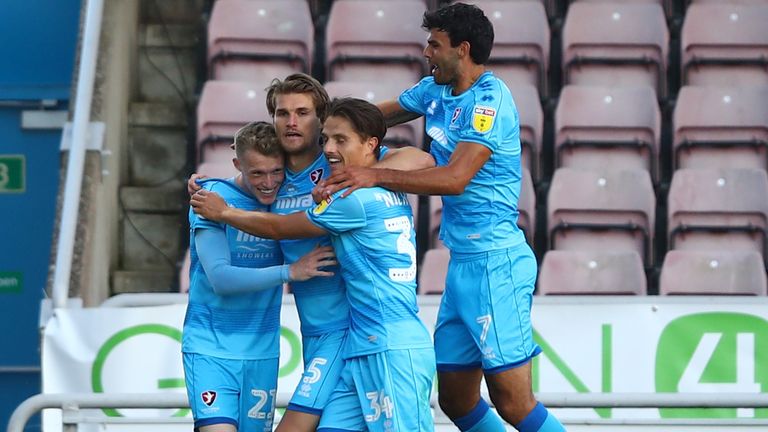 Highlights of the Sky Bet League Two play-off semi-final between Northampton and Cheltenham.

Cheltenham took control of their play-off semi-final as they earned a 2-0 win at Northampton on Thursday night.

Goals from Charlie Raglan - who headed home in the first half not long after the Cobblers had missed a penalty - and Conor Thomas earned Cheltenham the win - who looked the sharper side overall, 103 days since either had last played.

It gives Northampton a huge mountain to climb ahead of the second leg on Monday night.

How Cheltenham took control of semi-final

All the talk before the play-off games had been whether players would be fit enough after such a long lay-off, but it was an official who suffered an early injury at the PTS Academy Stadium. Assistant referee Alan Clayton appeared to pull his hamstring running the line after just 10 minutes, and had to be replaced by fourth official Darren Drysdale.

Northampton got straight back into action as soon as the game was restarted and immediately won a penalty as Ryan Broom tripped Michael Harriman in the box. Unfortunately for the Cobblers their usual penalty taker Sam Hoskins was suspended, and Owen Evans made a fine save from Ryan Watson's effort, getting down low to his right to keep him out on 16 minutes.

And 10 minutes later they would pay the penalty for that miss, as Raglan got across his man at the near post to nod home Jake Doyle-Hayes' whipped corner.

Northampton had a glorious opportunity to level just three minutes after the break. Callum Morton found himself in a great position to square for his strike partner Vadaine Oliver. He played the ball just behind him, however, and Oliver was forced to turn before shooting, which allowed Evans the chance to come out and block his close-range effort.

That was about as close as the Cobblers would get, and they would suffer further as Thomas converted from close range after 87 minutes to double Cheltenham's lead.

Man of the Match - Charlie Raglan

Was exceptional at both ends of the pitch. Scored the vital opener for Cheltenham and did everything he could to repel Northampton's aerial threats at the other end of the pitch. A brilliant performance from the centre-back. 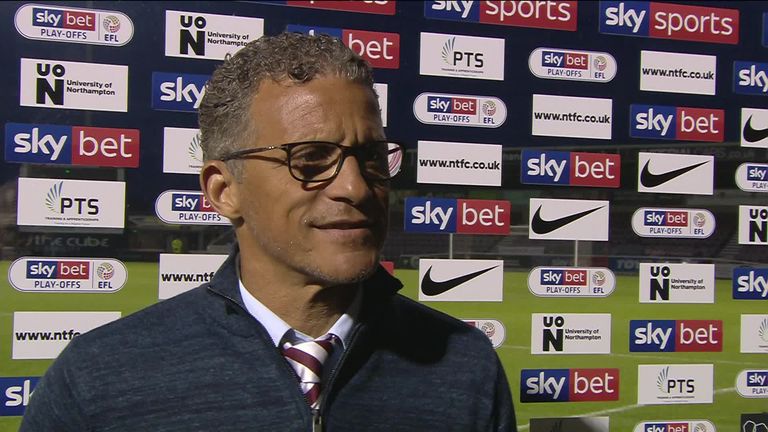 Kieth Curle felt Northampton's early penalty miss affected his players as they went on to lose 2-0 at home to Cheltenham in their League Two play-off semi-final.

Northampton's Keith Curle: "We're at the halfway point. Goals change games and the penalty miss affected the players. Saying that, I think we could've had another three penalties. If the first penalty goes in it changes the course of the game.

"The thing now is everyone in football knows the worst lead to defend is 2-0. If we score the first goal on Monday it changes the game again." 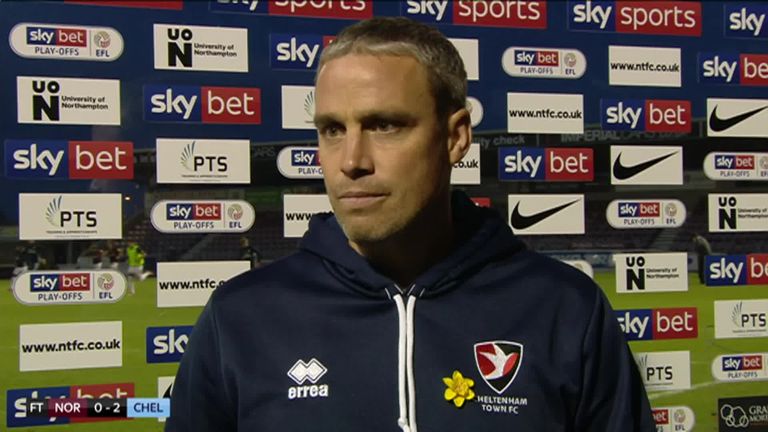 Michael Duff praised his players for their resilient display as they took control of their League Two play-off semi-final against Northampton with a 2-0 away win.

Cheltenham's Michael Duff: "It was a good away performance. You know what you're getting when you come here, with balls coming into the box. They break up the game and it comes in from every part of the pitch.

"I thought our back five were magnificent, along with Owen [Evans]. They created their best chance from a long throw. We showed resilience. We only had 12 training sessions, so for eight players to get through 90 minutes, and with those who came on the pitch. I was really happy."

The second leg is live on Sky Sports Football from 7.30pm on Monday, June 22. Kick-off is at 8pm.