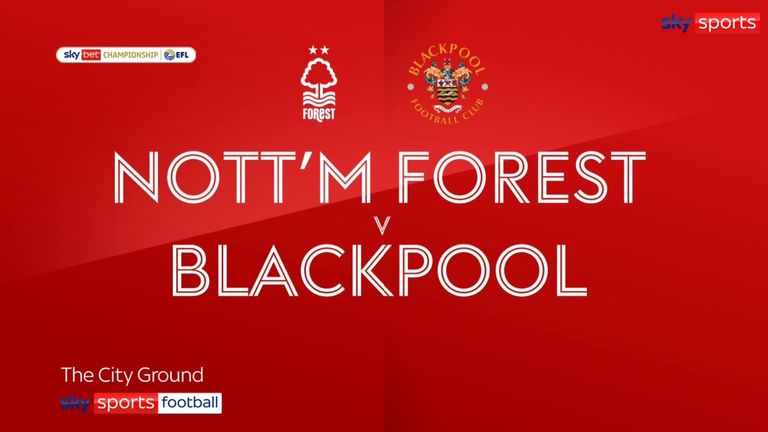 Brennan Johnson netted his second goal in three games to give Forest the lead at the City Ground, only for Jerry Yates to equalise just after half-time, following a defensive mix-up.

But the reprieve for Neil Critchley's side was short-lived, as Forest skipper Grabban pounced to secure victory, with the Reds now having taken 13 points from the five games since Chris Hughton's departure last month.

While both sides got into promising positions in the opposition box, a charged-down shot from Jack Colback was as close as either team came to breaking the deadlock in the opening 15 minutes.

The game sparked into life in the 22nd minute when an outstanding ball from Joe Worrall, from the right side of defence out to Max Lowe, who had advanced down the left wing, gave him the room to deliver an equally perfect cross to the far post, where Johnson was arriving to drive home an emphatic finish.

The rampaging figure of Lowe almost added to Forest's advantage when he cut inside and hit a curling shot which narrowly cleared the angle of post and bar.

Another good ball, this time from Ryan Yates, sent Djed Spence striding down the right side and it looked for a second as though he might race clear before Richard Keogh made a last-gasp interception.

The second half began with Ryan Wintle driving a shot powerfully wide for the visitors.

The pace of Johnson was still Forest's biggest weapon. A pass from Yates sent him clear down the right and only an outstanding challenge from Forest academy product Jordan Gabriel prevented Grabban from providing the finish.

Lowe then crossed for Johnson but his first-time effort flashed wide by a whisker.

A mistake at the back then cost Forest, as Spence and keeper Brice Samba both went to deal with a cross from Gabriel, with the defender producing a weak header as a result. The ball fell to Yates and he made no mistake, driving home to make it 1-1 in the 53rd minute.

Forest took only eight minutes to restore their advantage. Central defender Worrall got onto the end of a deflected cross from Lowe and, while Daniel Grimshaw saved, he could not hold the ball and Grabban pounced on it in true poacher fashion to make it 2-1.

Lowe forced another save from Grimshaw as Forest looked to make certain of the points. Grabban should have scored when he was picked out by substitute Joe Lolley but scuffed his shot.

When Lowe shot wide in the 90th minute, it prompted a sense of trepidation among the home fans but Forest held out for a deserved win.

Nottingham Forest's Steve Cooper: "I am not looking that far ahead [to a play-off push], it would be foolish to do that. Only a few weeks ago it was the other end of the table, wasn't it?

"But what I can say is that I am really enjoying working with the boys; I enjoy being here for the fans because the atmosphere was brilliant and it was really important that we won the game."

Blackpool's Neil Critchley: "We did not do enough. We had quite a lot of the ball but we did not do enough with it," he said. We have bounced back well from defeat previously this season and we will have to do it again. We have to show more bravery and courage in our play, as much as anything else. There was a great atmosphere here and it was only when that died down a little bit that we started to play with a little more confidence.

"If we had shown that more, if we had done that from the start, I think this was a game where there was something in it for us. We were disappointed in the first goal, although we had a good spell at the end of the first half. And we were bright again at the start of the second, we got the goal and you then start to think that you have the momentum to push on. They were much more dangerous on the counter-attack, which is when they created their best opportunities. The second goal involved a bit of luck as the cross was deflected and fell nicely for them."