Report and highlights from the Sky Bet Championship clash between Nottingham Forest and Bournemouth at the City Ground as Philip Billing's strike earned all three points for the Cherries, who had David Brooks sent off for a second yellow card 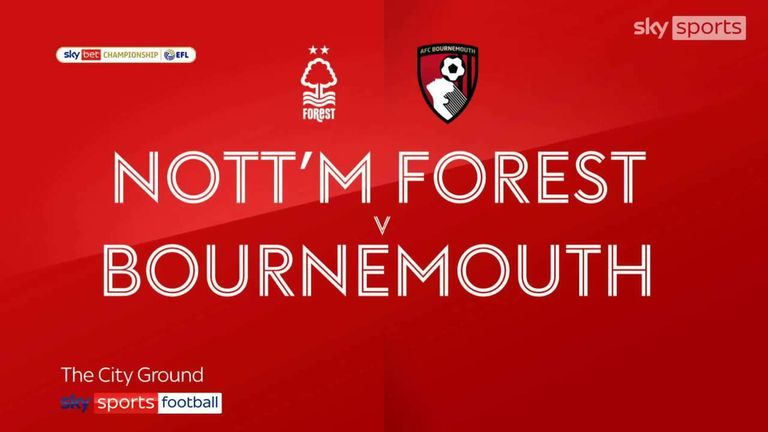 Ten-man Bournemouth held out for a 2-1 win at Nottingham Forest as goals from David Brooks and Philip Billing helped them edge a tight contest at the City Ground.

Brooks put the Cherries in front in the 28th minute with a nice finish and, while Scott McKenna's header cancelled that out three minutes after half-time, Scott Parker's men took the lead again through another well-taken goal, this time from Billing, in the 58th minute.

Forest's Philip Zinckernagel could not get enough dip on an early free-kick which cleared the crossbar.

Another free-kick saw the home side threaten again, with Jack Colback's deep delivery picking out Tobias Figueiredo at the far post. He headed the ball back into the danger zone but Bournemouth were just able to scramble clear.

The visitors came close to scoring with their first real attack as Billing ghosted into space a few yards out, only to be denied by a strong hand from goalkeeper Brice Samba.

Forest had failed to profit from their first real spell of pressure - but Bournemouth made the most of it when they were on top as they took a 28th-minute lead.

Dominic Solanke's ball down the right was perfectly measured and Brooks' run and finish was even better as he glided into the box from the right before lifting a shot across goal and beyond the reach of Samba.

Joe Lolley forced a save, albeit a comfortable one, from Mark Travers, with a driven shot. The Bournemouth 'keeper was well beaten when Ryan Yates released a thunderbolt from the edge of the box, but the midfielder's effort cannoned cruelly away off a post.

Travers had to be strong again when Lyle Taylor tested him from an angle, with Zinckernagel wild with the rebound.

Forest managed to pull themselves level from a well-worked free-kick three minutes into the second half. Zinckernagel bent in a cross from the left, picking out McKenna who managed to guide a header inside the far post.

Bournemouth took the lead again in the 58th minute as Jaidon Anthony slotted the ball to Billing as he rampaged into the box and the midfielder produced an emphatic finish.

Brooks, who had been booked in the 35th minute for a foul on Jordi Osei-Tutu, was shown a red card after being cautioned for a second time on the hour for another foul on the on-loan Arsenal man.

Bournemouth defended solidly after being reduced to 10 men, with Forest finding chances hard to come by. Substitute Lewis Grabban hit the crossbar with a header but was offside anyway.

Sub Alex Mighten shot over and Osei-Tutu worked hard to create a chance for himself but saw his shot blocked.

Nottingham Forest's Chris Hughton: "It was very disappointing. The atmosphere was great and in difficult periods the crowd lifted us. We showed glimpses of good quality and there were some good performances in the game. But ultimately we conceded two soft goals and, sometimes, you have to look back at them to make sure you have seen things right. But they were the same when I looked again.

"When you are playing an opposition with the kind of quality they have, if you give them those moments they will hurt you. They did exactly that."

Bournemouth's Scott Parker: "I have explained to him [Brooks] the disappointment I have. His team-mates have got him out of a hole. He has let his team down in a sense. He made a silly decision, it was a stupid decision. He understands that. He was sheepish in the dressing room.

"I am immensely proud, not just because of the way we went about it with 10 men, but because this was a very young side we had out there. The average age of our team was 23. When we had 11 men we did very well. I might analyse the game a little bit differently from my position but, when you have a man sent off, which was very disappointing, you have to show another side.