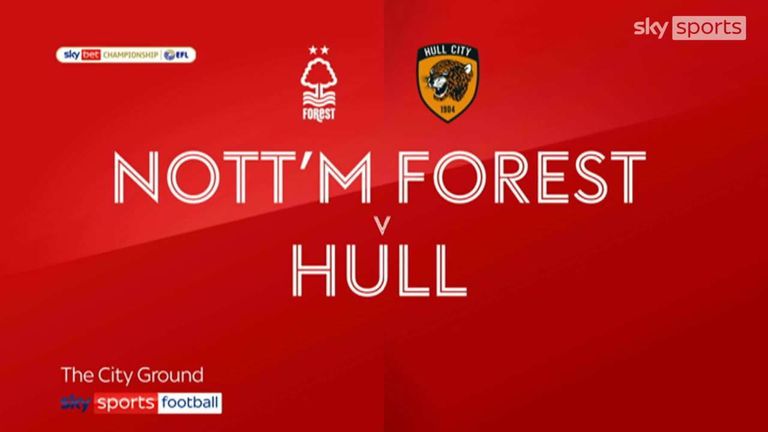 Nottingham Forest extended their unbeaten run to nine Championship matches as Brennan Johnson netted the winner in a 2-1 victory over Hull.

That sequence equalled Forest's best since 2016 with Johnson completing a second-half comeback that had been started by captain Lewis Grabban, who scored his 10th goal from the penalty spot after Keane Lewis-Potter had fired the Tigers in front.

The triumph moved Forest one point outside the play-off places.

Earlier, Steve Cooper's men, brimming with confidence, were on the front foot from the first whistle with Jordi Osei-Tutu particularly prominent during the opening exchanges.

A left-wing raid by the on-loan Arsenal wing-back led to the afternoon's first chance, but Grabban miscued his volley when given a free shot on Nathan Baxter's goal at the far post.

Grabban went closer with his next opportunity, guiding the deftest of flicks just wide of Baxter's near post after James Garner swung a low free-kick into the six-yard box from the right flank.

The hosts continued to dominate as Johnson exchanged passes with Djed Spence but, after he was given a shooting chance by the latter's delightful back heel, the 20-year-old Wales international dragged across the face of goal.

Just past the half-hour mark, centre-back Joe Worrall then charged on to a square pass and fired a first-time effort just over.

Hull eventually mustered their first attempt of the contest in the 35th minute but Greg Docherty's deflected edge-of-the-box strike was routinely gathered by Brice Samba.

Malik Wilks' free-kick was more threatening as it brushed the side-netting and, with Forest seemingly unsettled by an injury to Osei-Tutu that necessitated a tactical reshuffle, the improving Tigers went in front two minutes before the break.

A diagonal ball from the right by Sean McLoughlin caught Spence napping for the home side and Lewis-Potter stole in to surge towards goal and beat Samba with a firm, eight-yard shot.

Lewis-Potter might even have grabbed a second goal in first-half stoppage time when he rose unmarked to meet George Honeyman's corner but headed just wide of the near post.

A shell-shocked Forest did rally a little before the interval with substitute Alex Mighten tiptoeing his way across the byline to send in a cross that Grabban diverted towards goal, but the ex-Norwich striker could not extend Baxter unduly.

Cooper's men were back in the ascendancy, though, after the restart with Baxter at full stretch to claw away Philip Zinckernagel's looping header from Spence's right-wing delivery.

In the 51st minute, a positive burst into the box by Mighten was then halted by Honeyman's lunge and referee John Busby pointed to the spot.

Grabban had to wait four minutes while Mighten received treatment for an injury that forced him off but showed immaculate mental strength to firmly find Baxter's bottom-right corner from the spot.

At the other end, Lewis-Potter's low drive lacked the conviction to trouble Samba but Grabban turned provider as Forest surged into a 72nd-minute lead.

The 33-year-old forward charged down the right wing before sending in a deep cross that Johnson expertly collected before keeping his cool to steer an eight-yard effort into Baxter's bottom-left corner.

Hull refused to surrender with Samba needing to palm away a Lewis-Potter cross that threatened to drop below his crossbar and, with six minutes of stoppage time displayed, away boss Grant McCann's protests at supposed time-wasting by Forest earned him a yellow card.

McCann then looked on in frustration as Docherty lifted a good opportunity over and Callum Elder's downward header was smothered by Samba, meaning a spirited Hull's own six-match unbeaten run came to an end.

Nottingham Forest's Steve Cooper: "Coming back from 1-0 down at half-time when you've played so well is difficult and it would have been even harder if the fans weren't here.

"I think it could have been a different story if we didn't have 25,000 of them driving us on. So many people I talk to say it's an event coming to Forest because of the status of the club and how big it is. Everybody's health must come first with Covid, but I hope our fans can keep coming to games, because they're so important for us and I also know how important going to football is for everybody."

Hull's Grant McCann: "We were so comfortable and had scored a good goal to go 1-0 up, but the momentum of the game swung on an absolute howler by John Busby. George Honeyman has actually got a gash on his shin, because he has taken the ball and their player has kicked him.

"It's crazy at this level of football that that decision should be so wrong because he was five yards away from the play. It's so frustrating and I'm not one to criticise referees but that one was an embarrassing decision. But the performance levels of the group are getting better every week and we can take heart from how we played against a team who are on one of the best runs in the Championship."