Report and highlights from the Sky Bet Championship clash between Peterborough and Barnsley at the Weston Homes Stadium as the Posh and the Tykes played out a goalless draw on Saturday to share the spoils. 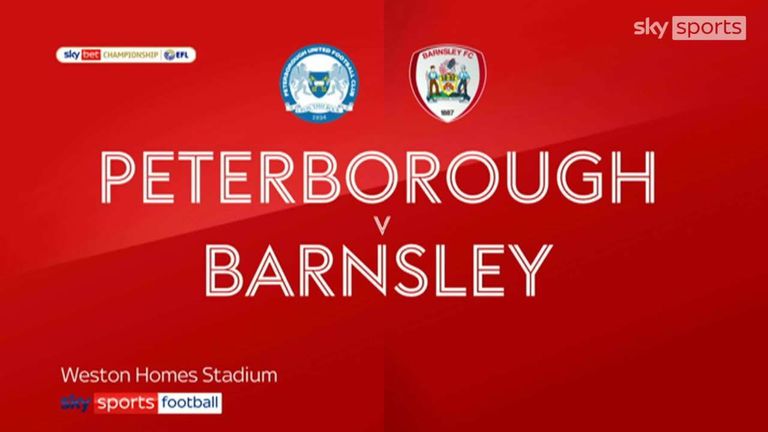 Highlights of the Sky Bet Championship game between Peterborough and Barnsley.

Relegation rivals Peterborough and Barnsley battled out a 0-0 draw that did nothing to help their Sky Bet Championship survival prospects.

The two teams, who are both in the bottom three, lost more ground in the fight to avoid the drop after a game interrupted by a floodlight failure 10 minutes from time, although it did provide a first point of new Tykes chief Poya Asbaghi's reign.

Power was restored within 20 minutes to allow the contest to be completed, and substitute Joel Randall then fluffed a glorious chance to give Posh a surge with his first goal for the club.

The £1million summer signing - out since August with a thigh injury - blazed over from close range after he was picked out by Siriki Dembele's pass and left with just Barnsley goalkeeper Brad Collins to beat.

That was a rare clear-cut chance in a contest low on quality - something which was perhaps no surprise given the recent form of the two clubs involved.

Barnsley arrived having lost 10 of their last 11 games - a run which cost previous boss Markus Schopp his job at the beginning of the month - while Posh had just one draw to show for their last five outings.

The most eye-catching inclusion on the Peterborough teamsheet was that of teenage striker Kai Corbett - a recent arrival after leaving West Ham - whose EFL debut lasted just under an hour.

The 19-year-old was a lively figure in a largely low-key first half as he provided the hosts' only effort on target, turned a low Harrison Burrows cross from the left just wide and came within inches of converting a pass from strike partner Jonson Clarke-Harris at full stretch.

Asbaghi selected three strikers, with Devante Cole, Cauley Woodrow and Carlton Morris all receiving the nod to face the worst defence in the Championship.

Cole dragged an early attempt wide before Woodrow and Morris both tested Posh keeper Dai Cornell just past the mid-point of the opening period.

A Posh change of plan at the break, with Ferguson switching to a flat back four, helped to create a more open game in the second half, although opportunities remained few and far between.

Morris curled wide and Callum Styles' long-range blast rose just too high for Barnsley, before Clarke-Harris was denied at close range by Collins.

Randall then squandered the best chance following the resumption before Cornell had to beat away a Morris drive in stoppage time.

Peterborough's Darren Ferguson: "It was a game lacking in quality, which was probably understandable to a degree with two nervous teams who are not getting good results at the moment. The floodlights going out probably did us a favour in all honesty. We were able to get a breather into some tired legs and I thought we finished strongly when we came back on, but unfortunately we couldn't take the big chance. We should have gone away thinking 'it wasn't a great game but at least we picked up the three points', so that was the big moment.

"It's definitely a case of two points dropped as they have only won two games all season, but I can't criticise my players for their application and the effort they put in. This result perhaps shows where we are at the minute. We're not getting that little break go our way that you sometimes need either. We've just got to keep working and keep believing the results will turn."

Barnsley's Poya Asbaghi: "We had ambition to win the game, so of course there is disappointment we didn't come away with all three points. But we don't know how important this point will be until the end of the season. Maybe then it will be worth something for us. A clean sheet is very pleasing and shows we are building something, but it is clear we need to link up better with each other than we did in this game and understand better how to use the spaces on the pitch.

"We have to create chemistry between the players and we now have a full week to train and work on that. I will not be surprised if a lot of the technical errors are due to a lack of confidence. It was a game between two teams who have been losing games and were low on confidence. You got that feeling when watching it. I cannot keep looking at the league table as that will not change my mind on how to approach games. I'm also not going to concentrate too much on what other teams are doing as that is not in my hands. For every minute or hour I do that I would lose focus on the thing I can effect, which is ourselves."