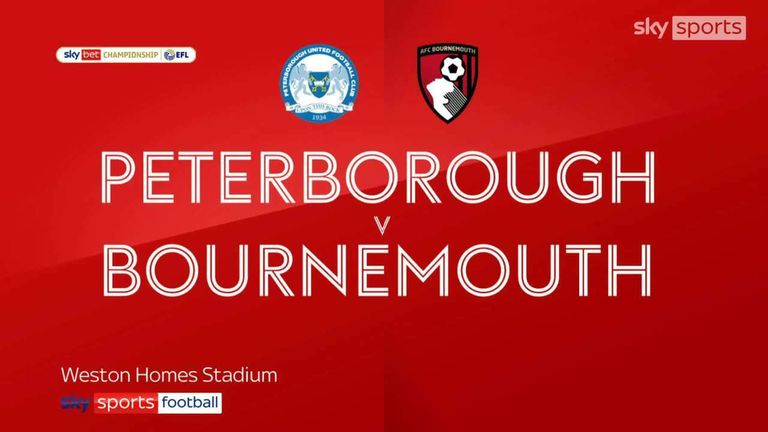 Unbeaten Bournemouth missed the opportunity to return to the top of the Sky Bet Championship table after a 0-0 draw at Peterborough.

A game of few chances saw neither goalkeeper seriously tested, with the visitors missing the chance to climb back above West Brom, who had won 4-0 against Cardiff a day earlier.

The result also kept up Peterborough's impressive home form, with all of their eight points this season coming at the Weston Homes Stadium, although they failed to climb out of the relegation places after failing to score.

In the end, they were relieved to see Dominic Solanke miss two late chances, with the Cherries striker failing to add to his seven goals this season.

The visitors were on a four-match winning run in the league but created little in a competitive first half. Their best chance fell to Manchester City loanee Morgan Rogers who burst into the area, but his shot at the near post was saved by Dai Cornell in the Peterborough goal.

At the other end, Jorge Grant came close to giving Posh the lead, but he was unable to convert Harrison Burrows' right-wing cross on the slide under pressure from former England defender Gary Cahill.

It was a different story in the second half as the Cherries began to assert their dominance. David Brooks blazed over from inside the area after a short corner routine, before Solanke cut inside onto his right foot but shot straight at Cornell.

Both managers made three substitutions in the hope of injecting a greater attacking threat to their sides, but a winning goal at either end rarely looked likely.

Jonson Clarke-Harris, who is playing while he appeals an FA ban over historic tweets, saw a long-range free-kick easily saved by Bournemouth goalkeeper Mark Travers, which was as good as it got for Posh in the second half.

The home side were, though, indebted to substitute Conor Coventry who blocked a goal-bound shot from Jaidon Anthony after he had been teed up by Solanke.

The former Liverpool and Chelsea striker then had a chance to win it 10 minutes from time as the visitors kept up the pressure on the Peterborough goal, but after pouncing on a loose ball he fired over from inside the area.

Solanke then headed over from a 90th-minute corner as Bournemouth's winning run came to an end, leaving them second in the league behind West Brom on goal difference.

Peterborough's Darren Ferguson: "I spoke to the players about how good our home form has been. The players got the game plan right to a man. We played as a team against a side who are ahead of most others in the league. We've not had many chances in the match. The fans are used to us bombing forward and attacking, but you can't do that against Bournemouth as they would have cut us to shreds. The atmosphere was lacking because of that, but we were very solid and did what we worked on.

"We've had eight years in League One and they've had five years in the Premier League, so I'm really delighted. Some of the football was excellent in the first half, and the subs did well when they came on. I've got two weeks to sort out our away form as we are a completely different team at home."

Bournemouth's Scott Parker: "It was a bit passive. We lacked intent and played the game in front of them. To their credit Peterborough are an organised team and limited the space. There was a reaction in the second half and we had an attacking threat. We've just not managed to put the chances away. We gave ourselves 45 minutes to win a game of football and that's not us.

"We've been very clinical and very fluid (previously) but we've not put the ball away. We had some good chances but looked a bit off it. That's football. They're humans and sometimes have those moments. The second half is where we need to stay. Dom's been fantastic since I've come here and missed some chances, but he puts himself in good areas for the team. It was just not his night."