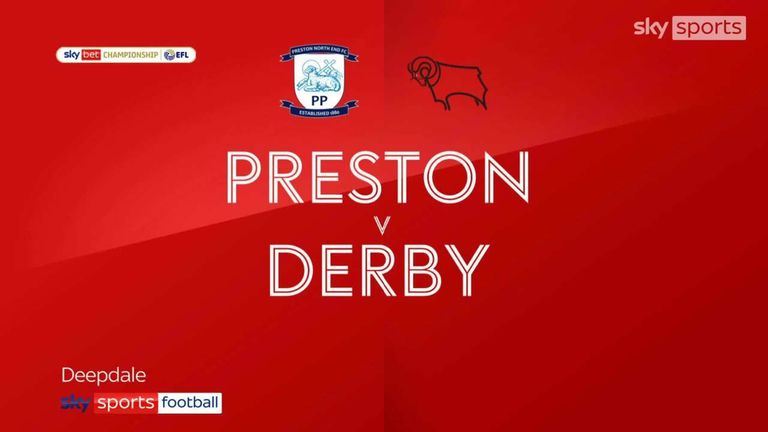 Highlights of the Sky Bet Championship match between Preston and Derby

Misfiring Preston failed to give their late owner Trevor Hemmings a fitting send-off victory after a frustrating 0-0 draw with Derby at Deepdale.

A bumper crowd of 18,092 packed into the ground as the Lancashire club paid an emotional tribute to Hemmings, a huge name in football and horse racing who died aged 86 on Monday evening.

All tickets for the match were £5, with the gate receipts going to charities supported by Hemmings, while the corner flags were green and yellow - the colours that his jockeys wore as a three-time Grand National winner.

However, Preston's players lacked a cutting edge on the pitch as the Rams dominated proceedings and wasted a hatful of chances to spoil the poignant occasion further.

The Rams started the better at Deepdale, although Graeme Shinnie spurned a glorious chance to dampen the spirits after only three minutes. The Scottish midfielder had bags of time on the edge of the box but he inexplicably blazed over.

And had it not been for a fine fingertip save from alert Preston keeper Daniel Iversen, the visitors would have been ahead in the ninth minute.

Ravel Morrison hit the target with a thumping right-footed drive from distance but Leicester loanee Iversen athletically tipped the shot over the bar.

Jason Knight had a shot blocked soon after as the Rams pushed hard for an opener but the hosts held their nerve under the early pressure.

Josh Earl headed over at the back post from a Tom Barkhuizen cross as the home side finally mustered a chance of their own, yet Iversen spared their blushes again moments later, when he got down to block Tom Lawrence's goal-bound strike.

Festy Ebosele was then afforded far too much time and, having avoided the attentions of four players, forced Iversen to make a fine save at his near post from his powerful left-foot strike.

The Lilywhites had done little to impress in the first half but started brightly after the break and Andrew Hughes' glancing header from an Emil Riis cross flew agonisingly wide of the far post.

At the other end, Morrison had a stinging strike charged down on the edge of the box and then dragged a right-foot curler wide as the Rams failed to make one of their numerous chances count.

Curtis Davies headed against the crossbar from Knight's right-wing cross and seasoned centre-back Phil Jagielka saw his follow-up shot superbly saved by Iversen, who was having a game to remember.

Riis was thwarted by Rams keeper Ryan Allsop at point-blank range, before Hughes headed Ben Whiteman's inswinging corner just wide at the back post late on but it would have been rough justice for the Rams if their Lancashire hosts had snatched victory.

Preston's Frankie McAvoy: "I asked the players to win to give Mr Hemmings a good farewell, but that's a real sickener for me because I'd have hoped we performed better. That's what hurts me and disappoints me the most. I was extremely disappointed with that first half, that's as poor as we have been if I'm honest. The first half wasn't good enough and I hold my hands up for that. We were going to make a few changes at half-time but the performances were that poor that they had to go out and improve and show they can do better than that.

"We got a bit better in the second half, which was pleasing, but for me that wasn't good enough. The support turning out [for Mr Hemmings] was fantastic, it was testament to them to do that. That's the least we could have done for him. When you don't play well the positives are that you kept a clean sheet and haven't lost the game but they are probably the only positives if I'm honest."

Derby's Wayne Rooney: "We were the better team and deserved three points, but the issue we've had all season is scoring goals. I thought were focused, especially the first half and we created some really good chances. We just need to take them, because it could have been a different afternoon for us. When you don't, well then Preston composed themselves towards the end of the second half and had some chances.

"I'm pleased to come away with a point, but really it should have been three. Maybe it's a lack of composure and not being ruthless enough. We'll keep working and keep trying to do the right things. We've gone through difficult times at the club, but we'll keep pushing. It's a good to come away with at least a point away from home, it always is in the Championship, but we're frustrated we've not come away with all three."