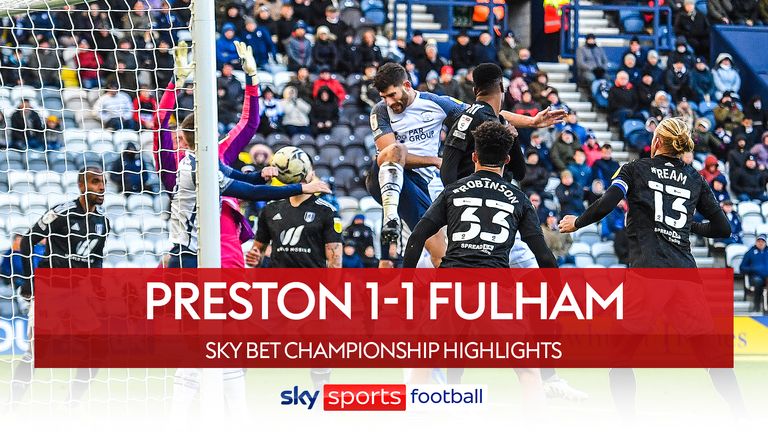 Highlights of the Sky Bet Championship match between Preston and Fulham.

Fulham missed the chance to open a significant gap at the top of the Sky Bet Championship table for the second time in four days as they were held to a 1-1 draw at Preston.

On Wednesday night, they failed to find a way past stricken bottom club Derby, but the game at Deepdale started positively and they took the lead when Tim Ream poked home from inside the six-yard box (15).

Preston kept chances of a potentially decisive second to a minimum and then earned a share of the spoils when substitute Ched Evans bundled a well-deserved equaliser, despite suspicions of handball (72).

The Cottagers remain in first place a point ahead of Bournemouth - who drew 2-2 with Coventry late in the afternoon - while Preston sit 16th, seven points outside the top six.

How Fulham were given a reality check at Deepdale

With Aleksandar Mitrovic back after missing the midweek draw with Derby, Fulham received a huge boost - not least due to the fact he had scored more goals against Preston than any other team in his career.

But after a typically dominant start from the Championship front-runners, the first goal of the game came from an unlikely source. When Jean Michael Seri delivered a well-hit free-kick from the right flank, Ream was on hand to nip between defenders and poke in his first goal since Boxing Day 2017.

Preston did not let their heads drop, though, and it was they who created the better openings from there, with Emil Riis getting the better of Ream and Tosin Adarabioyo on a number occasions, though the Dane was unable to apply the finishing touches.

Fulham struggled to get control of the game after the restart, too, allowing Riis to fire in another warning shot. After his long throw was repelled, he soon had the ball back at his feet and managed to hit a low shot from 18 yards that Marek Rodak had to be alert to hold.

On the hour mark, Evans - who had scored in North End's midweek win over Middlesbrough - was introduced. And 12 minutes after later, he brought the hosts level from close-range, though there were suspicions of handball from both himself and Riis when Ben Whiteman delivered his corner from the left.

Fulham probed for a winner in the closing stages, but after a below-par performance across the board, it failed to materialise.

Man of the match - Emil Riis

The Danish striker has been a thorn in the side of numerous Championship defences over the last month or so and he was so unfortunate not to add to his goal tally at Deepdale, with his darting runs out wide causing all sorts of problems for the Cottagers.

Preston's Frankie McAvoy: "We needed to be strong and to show discipline today, and I thought we did that. Don't forget every one of Fulham's players have played in the Premier League, so we knew it would be tough. I was disappointed with the way we conceded the early goal, and that put us on the back foot a bit, but we were much better in the second half and so credit to the players for that. There was a bit of controversy with our goal. I've seen it back, and I'm not sure there was much in it.

"Some things like that go your way, and some go against you. I think on balance, though, those kind of things even themselves over the course of a season. I'm delighted for Ched. He's come on and made a real impact, and that's what we want from him. He really is capable of causing all sorts of hassle for opposition defenders. Credit to Fulham, too, they've been free-scoring this season. But to a man, all of our players were fantastic and we fully deserved a point."

Fulham's Marco Silva: "That was a big mistake from the referee and the linesman. There was an elbow in there and then a clear handball before the ball goes over the line. It's difficult for us to accept, but again the referee had a bad performance. We've ended up losing two points, and it's not been our fault again. We had a similar situation against Coventry recently. It was a really tough game for us, but that's just what we expected.

"It's been a really difficult week for us, having to play until 10pm on Wednesday night and then coming here for an early Saturday match. That isn't an excuse though. It should be up to us to create more problems for the opposition. I saw a good reaction from the players in the first half, but the second half was much different. It wasn't the best from us, and some players do need to improve further, but it's another point on the road and it is an important one."

Fulham are next in action on Friday, December 3, when they host Bournemouth at 7.45pm - in a game live on Sky Sports Football - while Preston return the following day at 3pm, when they face Blackburn in the Lancashire derby at Ewood Park.