Report and highlights from the Sky Bet Championship clash between Preston and West Brom at Deepdale as Ben Whiteman puts North End ahead but Matty Phillips strikes back to earn a point for the Baggies. 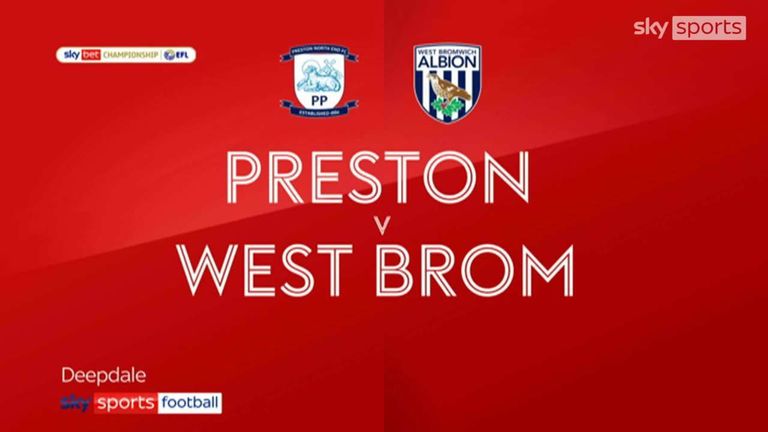 Highlights of the Sky Bet Championship match between Preston and West Brom.

Preston and West Brom held each other to their third consecutive Championship draw as they battled out a 1-1 stalemate at Deepdale.

Valerien Ismael's visitors created the better chances as they bid to remain in the early running for promotion - but the visitors scrapped out an important point for under-pressure boss Frankie McAvoy.

A point apiece means West Brom stay in the play-off spots overnight - edging up to third in the table - with the hosts keeping themselves out of the drop zone with a move up to 17th.

Neither team created much in a timid opening at both ends of the pitch as Adam Reach lashed a long-range strike well over the top for West Brom before Patrick Bauer flicked a header wide from a deep corner.

The Baggies did look set to increase the tempo before the break, however, as the busy Grady Diangana forced a diving stop from Daniel Iversen before Preston pounced to edge themselves in front on 27 minutes.

But despite that setback the visitors showed their promotion-chasing class just before the break, as Scotland star Matty Phillips produced a deserved equaliser.

Darnell Furlong's long throw-in caused major panic inside the Preston box and Phillips stooped down - amid the penalty area pinball - to bravely nod past Iversen in added time.

The visitors pushed hard to build on that immediately after the restart, as Phillips stepped away from two tackles to curl an effort over and Diangana forced Iversen to claw out his cross-shot just before the hour mark.

Both managers did look to try and force the issue in the closing stages with attacking changes, with Karlan Grant and Callum Robinson replacing Diangana and Phillips and the fit again Connor Wickham coming on for Sean Maguire.

West Brom continued to boss possession in the final 20 minutes but it was McAvoy's Preston who carved out the strongest chance to snatch all three points late on.

Some loose possession from the Baggies was seized upon by Preston on the break but Ryan Ledson's driven effort was acrobatically kept out by Johnstone.

That miss was almost punished by Ismael's visitors in the 90th minute but when Grant slipped in Jordan Hugill inside the box, Iversen was quick off his line to make a brave block and deny the Norwich loanee a late goal against his former club.

Preston's Frankie McAvoy: "That group of players we've got, I know they give everything. I don't think anybody can question their integrity, their commitment, their energy, their enthusiasm.

"There's teams that they've played against that they've turned over and thankfully today we've stood up and we've managed to maintain our unbeaten run, although when you come to your home games, you're hoping you can try and win them."

West Brom's Valerien Ismael: "I think it was the same picture as against Derby - it's as simple as that. The opponent had two shots on target and scored a deflected goal. "They took the lead, we came back into the game just before half-time which was really important - it gave us some momentum.

"In the second half it was exactly like Derby. We tried everything, we showed the right mentality. And that is the good thing. What we have seen is that we need to work more on the last third. The problem is the quality of the last pass, the quality of the cross - it was not good enough. And when you get a chance to score you have to take it - we have to develop that killer instinct. That is the last step that we need to do working with the guys - to win games you need to score."