Report and highlights from the Championship clash between Preston and Sheffield Wednesday at Deepdale as Tom Barkhuizen scores to end North End's poor run at home; Tony Pulis suffers a defeat in his first game in charge of the Owls 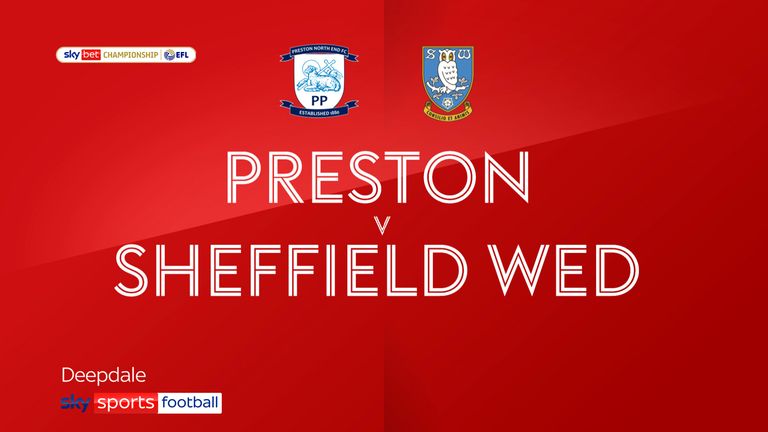 Tony Pulis made a losing start as Sheffield Wednesday boss as his 10-man side lost 1-0 to Preston at Deepdale.

Josh Windass' early dismissal gave the visitors a mountain to climb and they were made to pay shortly after half-time when Barkhuizen volleyed home a superb left-footed opener.

The Owls failed to respond and remain in the relegation zone as their nine-year run without a win at Deepdale continued.

Pulis' men had the first attempt in an edgy start as Windass' audacious long-range lobbed effort drifted harmlessly over the crossbar.

Soon after, Owls skipper Barry Bannan's beautifully whipped corner evaded the whole defence but former Preston man Adam Reach could not convert from a tight angle at the back post.

But Wednesday were dealt a huge blow in the 17th minute when Windass received a straight red card for a high foot on Preston full-back Joe Rafferty.

Windass' dangerous challenge gave Wednesday their fourth red card from 13 league fixtures this season and put the visitors on the back foot in the opening stages.

But Alex Neil's men were still susceptible to the counter and Callum Paterson cleverly found Australia international Massimo Luongo on the break, but his well-struck effort deflected into the side-netting.

Preston's star man Scott Sinclair was incensed not to have been awarded a penalty before half-time after appearing to be upended by opposite number Liam Palmer in the box but the Owls resiliently went into the break level with Westwood relatively untested.

But Westwood, who was starting for the first time in 12 months, failed to deal adequately with a threatening delivery from the left three minutes after the break.

Barkhuizen then followed up with a superbly struck left-footed volley past the helpless 36-year-old to give Preston the lead.

Barkhuizen's glorious strike was his first goal of the season and only Preston's second in six league matches at Deepdale.

Captain Daniel Johnson almost doubled the home side's lead but his left-footed shot was agonisingly wide of the target.

Then substitute Paul Gallagher's free-kick almost sealed the three points with Westwood rooted to the spot.

But Wednesday failed to sustain any attacking pressure in the closing moments as Preston held on for their fifth league victory of the season.

Preston's assistant manager Frankie McAvoy: "It feels good to win at home. It was tough, though, when they went down to 10 men because they went to a back five and the onus was on us to break them down. Thankfully we've won the game. I thought we controlled it in the second half with the changes Alex [Neil] made both personnel and tactically so we're delighted.

"I thought right away it was a clear red card as Windass went straight into Rafferty and I wasn't surprised one bit when he was sent off. Tony Pulis' teams are always well organised but one big decision which was crucial was the Scott Sinclair penalty kick. I thought it was a penalty and we didn't get it so it was a mistake from the referee, we should have been given that."

Sheffield Wednesday's Tony Pulis: "I thought the effort and commitment was absolutely fabulous. They only had one shot at goal and that was their goal so you have to give the lads a lot of credit. I was pleased with all of them, they gave a very honest performance. We matched them in most areas for the rest of the game. There were times when we have got to move the ball better. You cannot make mistakes.

"It's Kieren's [Westwood] mistake [for the goal]. He's big enough and experienced enough to take it. I haven't seen [the red card] back yet. His foot was in high. We are not going to be able to appeal that. We don't need red cards in the situation we are in at the moment. I thought Josh [Windass] could have headed it. He said he was trying to flick it over to [Adam] Reach but he caught the player."