Considine was carried off on a stretcher early in the first leg of the Europa Conference League play-off against Qarabag; Aberdeen chairman Dave Cormack had criticised the pitch on social media on the eve of the fixture 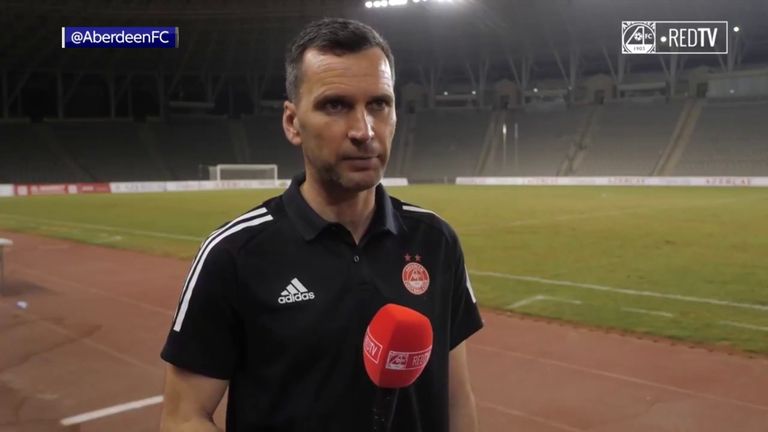 Aberdeen suffered a serious-looking injury to Andy Considine and a 1-0 defeat against Qarabag on a shocking pitch in Baku.

Considine was carried off on a stretcher early in the first leg of the Europa Conference League play-off.

Aberdeen chairman Dave Cormack had criticised the pitch on social media on the eve of the fixture, claiming it was "beyond the pale" that UEFA had authorised its use.

It soon became apparent that the surface was just as bad as Cormack had signalled. The Tofiq Bahramov Republican Stadium is named after the linesman who awarded Geoff Hurst his second goal in the 1966 World Cup final and the arena was fittingly controversial.

Big chunks of turf bounced up whenever a player broke stride, the ball bobbled around, and the unstable surface possibly played a part in Considine's knee injury.

The Dons also had to contend with some poor refereeing and, after a disappointing first-half performance, even taking the terrible pitch into account, having just Jaime Romero's 30th-minute goal to overturn at Pittodrie was not the worst outcome.

Joe Lewis pulled off a decent early stop after Turav Bayramov got past Scott Brown and fired a strike from 22 yards, and the Dons were finding it difficult to adapt to the pitch and get up the park.

It was immediately evident that Considine was in distress when he went down clutching his left knee, almost motionless, after being barged at a high ball. The defender's studs appeared to stick in the soft turf, giving him no chance to readjust following the contact.

After a long delay, Jonny Hayes came on at wing-back and Jack MacKenzie moved into the back three.

The goal came down Aberdeen's reshuffled left side. With Hayes perhaps wary of an untracked Qarabag player running outside him in the penalty box, Romero moved inside to gain a yard of space and rifled a shot which went through the Irishman's legs with the pace of the effort beating Lewis at his near post.

With Jay Emmanuel-Thomas offering little either in an offensive or defensive aspect, Stephen Glass brought on Connor McLennan for the forward at half-time and Aberdeen had much more of the ball in the opposition half.

They struggled to do much with it though with MacKenzie hitting two precious free-kicks too close to the goalkeeper.

Slovenian referee Rade Obrenovic appeared to show greater leniency towards the home players and he wrongly ordered Lewis Ferguson off the park after treatment, despite booking his assailant. He then flashed a yellow card in the direction of Glass when his error was pointed out.

Qarabag were occasionally threatening from long range but the visitors were far more comfortable and had a chance in the 87th minute when Christian Ramirez got in behind. The American, perhaps wary of running on the bumpy ground, shot early and the ball trundled into the goalkeeper's hands.

Aberdeen had a stoppage-time scare when Funso Ojo gave away possession but Lewis came out well to block from Marko Vesovic.

The Dons had a last-gasp chance to level when they were awarded a free-kick but Ferguson's effort was held in the seventh minute of time added on.

Aberdeen now go to Hearts in the Scottish Premiership on Sunday at 3pm, before the return leg with Qarabag at Pittodrie at 7.45pm on Thursday.