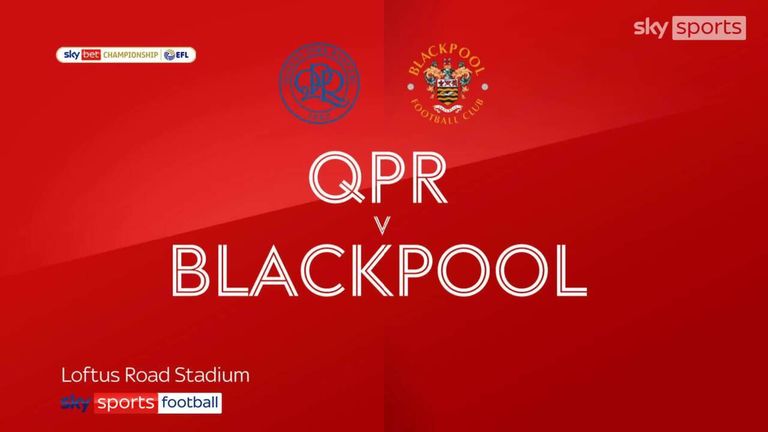 Highlights of the Sky Bet Championship match between QPR and Blackpool.

Josh Bowler's goal against his former club gave Blackpool a 1-0 victory at QPR.

Rangers had plenty of possession at Loftus Road but were unable to find an equaliser after Bowler netted in first-half injury time.

Bowler cut in from the right and, after his first effort was blocked, he sent a fine strike beyond goalkeeper Seny Dieng and into the far corner of the net.

Lyndon Dykes had made a mess of a glorious chance for QPR just after the half-hour mark.

As Blackpool attempted to play out from the back, Stefan Johansen robbed Kenny Dougall near the edge of the penalty area and the ball ran to Dykes, who could only shoot tamely at keeper Dan Grimshaw.

It was a dreadful miss by the Scotland striker and had he opted to return the ball to Johansen, his captain would have been presented with a simple tap-in.

Earlier, Dykes was set up by debutant Ethan Laird but could not find a way past Grimshaw, who also kept out a low shot from Tyler Roberts.

After the interval, Grimshaw gathered another effort from Roberts, who also sent a shot wide.

The powerful youngster made an impact, worrying Blackpool's defence with his pace and directness, while on-loan Manchester United right-back Laird caught the eye.

But QPR again badly missed talisman Chris Willock - a problem stretching back to last season, when he suffered a hamstring tear in March.

Willock returned for the opening-day win against Middlesbrough, producing a fine performance and scoring a brilliant goal to underline his importance to the team.

He has not featured since as Rangers look to ease him back to regular action, but Beale had expected him to be involved against the Seasiders.

His absence was a major blow for the hosts - although the result might have been very different had Dykes taken that first-half opportunity.

Rangers might also have rescued a point had Grimshaw not produced a crucial save at his near post to deny Armstrong late on.

And they would certainly have rescued one had Armstrong been able to hit the target with a header from Albert Adomah's cross in the final seconds, but he headed over.

Blackpool, meanwhile, can feel well pleased with their response to back-to-back defeats in which they failed to score.

Bowler, who was sold to Everton in 2017 after making just one senior appearance for QPR, took his goal superbly.

QPR's Michael Beale: "We should be two or three up before we go 1-0 down. Then we concede at the worst possible time - right on half-time. We spoke about it and said that if we kept playing then opportunities would come, and I felt we did that.

"We threw a lot of energy at it in that second half and were a bit anxious at times. We were a bit loose in possession because of trying so hard - and the goal didn't come. I thought if we could score early in the second half then we would be the team with the momentum. We couldn't find the goal. But we had some fantastic chances early in the game. Ethan flashes one across the six-yard box and we have to score in that moment. Then he pulls one back to Lyndon and I think we need to score in that moment as well."

Blackpool's Michael Appleton: "We played well in that first half and really contributed to a decent game of football. We went ahead and looked comfortable. Then the injury to Charlie was a big blow because he was having a big influence on the game.

"They'll get better as a group. They'll learn how to deal with being ahead in games and be a bit braver and continue to press higher up the pitch. But I've been in their shoes and know what it's like - sometimes you want to protect what you've got and hit teams on the counter-attack."