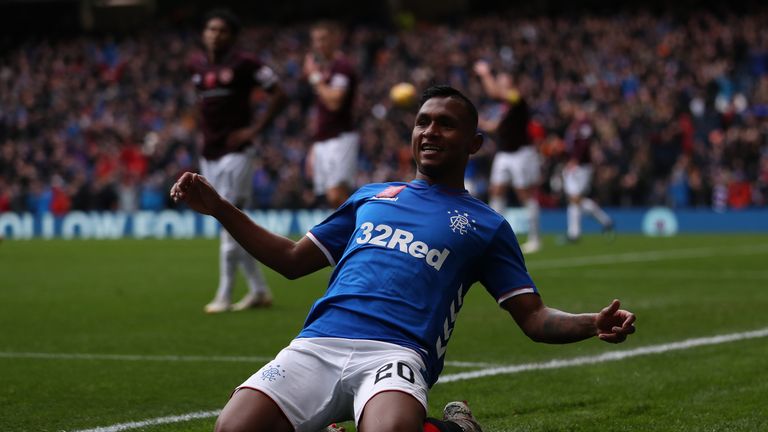 Hearts' unbeaten start to the Scottish Premiership season juddered to a halt as they were comfortably beaten 3-1 by Rangers at Ibrox.

Morelos scored his 11th goal of the season when he brilliantly flicked home from Daniel Candeias' cross 10 minutes later, and Scott Arfield added a third before half-time (33).

Hearts produced a spirited response in the second period, especially after Michael Smith had been sent off for a second bookable offence, as Jimmy Dunne's header reduced the deficit (67).

Man of the match: Ryan Kent

Rangers, who move back up to sixth with the win, were unchanged from the side which beat Rapid Vienna 3-1 in the Europa League on Thursday, and Gerrard could not have wished for a better start.

Tavernier's free-kick found Morelos alone inside the Hearts box after a failed attempt to play a high line, and he set up Kent for a simple finish into the unguarded net.

Rangers manager Steven Gerrard named the same team which beat Rapid Vienna in the Europa League on Thursday. It meant that Jon Flanagan and Ryan Kent replaced Borna Barisic and Kyle Lafferty from the last league game at Livingston.

Hearts made one change to the side which faced St Johnstone in their last league outing as Uche Ikpeazu, who missed his team’s last three matches with a foot injury sustained in the away win over Motherwell last month, returned in place of Calumn Morrison.

And the visitors were made to pay as John Souttar was easily dispossessed by Candeias inside his own penalty box, and the Portuguese winger's cross was flicked impudently in at the near post by Morelos.

Morelos turned provider once more for Rangers' third just after the half-hour mark as he met Tavernier's cross to force Zdenek Zlamal into the save, but Arfield was on hand to fire in the rebound.

Connor Goldson had a glorious chance to stretch Rangers' lead when he somehow lifted his close-range shot from Candeias' cross over from underneath the crossbar, but things got even worse for Hearts after 55 minutes.

Smith, who was already on a booking for a foul on Ovie Ejaria, blocked Jon Flanagan as the full-back attempted to advance into the penalty box, leaving referee John Beaton with little option but to produce a second yellow, followed by a red.

Hearts showed the qualities which have hauled them to the Scottish Premiership summit in these early months of the season thereafter, as Dunne rose to head in from Olly Lee's set-piece, before McGregor beat away Arnaud Djoum's fierce shot - but the damage had already been done.

Man of the match - Ryan Kent

This was a real statement win for Rangers, and it was Kent who showed Gerrard why he was right to retain him in the side following the win over Rapid Vienna on Thursday.

The youngster, on loan from Liverpool, got the ball rolling with a simple finish, but he was a constant thorn in the Hearts' defence, oozing confidence on the ball and instrumental in everything good about Rangers' scintillating first-half display.

Rangers return from the international break to take on Hamilton, live on Sky Sports, on October 21 at 1.30pm. Hearts, meanwhile, host Aberdeen the previous day at Tynecastle.