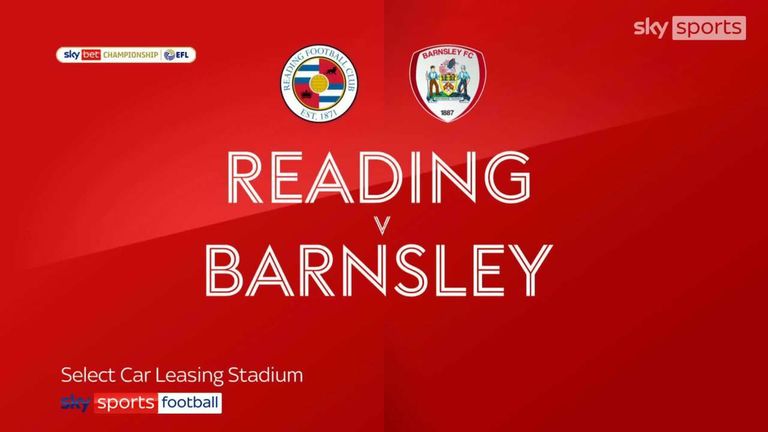 Highlights of the Sky Bet Championship clash between Reading and Barnsley

Barnsley dominated the first half but Cauley Woodrow wasted a series of chances and centre-back Scott Dann almost gave Reading a half-time lead.

Callum Brittain then hit an upright for Barnsley early in the second period, but John Swift's eighth goal of the season in the 77th minute settled the outcome in the home side's favour.

Reading had gone into the international break in fine fettle, taking 12 points from a possible 15.

Barnsley were without a win in nine matches and had lost their past three outings.

It was Barnsley, though, who started the better, with Aaron Leya Iseka cutting in from the right, only to stumble when about to shoot from outside the area.

The visitors kept up the pressure and, following a short-corner routine, Brittain saw a well-struck effort blocked by the home defence.

Barnsley then threatened with a good run and cross from Victor Adeboyejo, which Woodrow narrowly failed to get on the end of.

Woodrow then twice went close, firing just wide from distance and also drawing a fine save from home keeper Luke Southwood with a similar attempt.

Reading replied positively but Tom Dele-Bashiru had a 'goal' ruled out for a clear offside and a Swift free-kick was comfortably dealt with by Collins.

Back came Barnsley, with Iseka volleying over a Woodrow cross before the latter forced Southwood into a sprawling stop from his low free-kick.

Reading almost snatched what would have been an undeserved lead shortly before the break. But from Swift's corner, the goalbound header from Dann - the former Crystal Palace defender making his first start for his new club - was well pushed away by Collins.

Barnsley opened the second half strongly, with Brittain striking a volley from Iseka's cross onto the foot of a post.

But they had an escape of their own soon after when Collins raced from his area to nod away a long home punt forward.

Collins then had to quickly scamper back to his goal line to catch Josh Laurent's audacious long-range attempt from the loose ball.

As Reading at last upped their tempo, substitute Femi Azeez broke clear, only to delay his shot too long and lose the opportunity.

Collins then made a superb save to keep out a deflected drive from Baba Rahman, but the keeper could do nothing to prevent the opener 13 minutes from time, with Swift rounding him to coolly slot home after a penetrative run from near the halfway line.

Reading's Veljko Paunovic: "It finally worked for us. It was a fantastic pass from Scott Dann and an amazing execution from John. It was a well-deserved win and the team worked really hard and was really mature. We started well, played some really good football and created with some very quick actions in our build-ups. We took the ball into the final third and created good opportunities. Maybe we got stuck with our finishing, I think we have to improve that.

"But we kept a clean sheet in the first half with a good performance. Then, at half-time, we adjusted a couple of things where we had struggled a bit, especially when we had lost the ball. Our formation had to have a much better structure. We knew that at 0-0 at half-time, Barnsley were going to have more confidence and courage in the second half. Barnsley had a few opportunities then. That's why it was a hard win today and a bit of a relief."

Barnsley's Markus Schopp: "I saw a Barnsley team that tried its best in a difficult situation to get the best result. When you are in a situation like we are right now, it's not that easy. I don't know how many times we tried to get in Reading's box to finish well, to get a goal. But it just didn't happen. It's a film that we have already seen so many times this season.

"After 60 or 70 minutes, we had the situation when we were struggling in a certain position in the midfield and we had to make a substitution. At this moment, we lost for a couple of minutes our organisation and this was enough today for a team like Reading to beat us."