Report and free match highlights from the Sky Bet Championship clash between Reading and Huddersfield at the Select Car Leasing Stadium as Danny Ward scored a hat-trick in a thrilling topsy-turvy win for the Terriers. 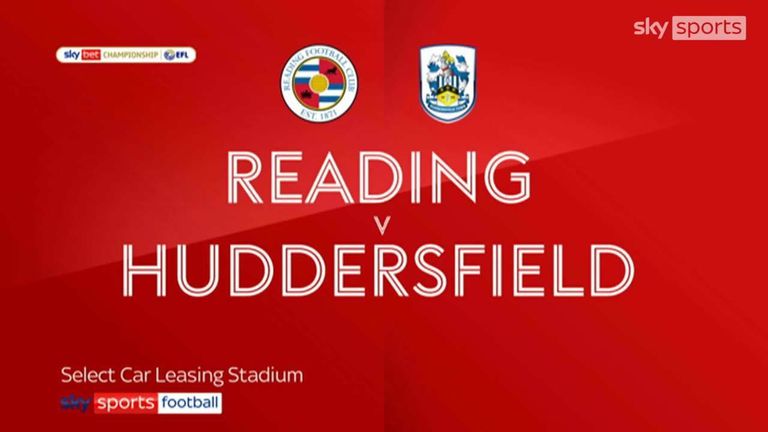 Highlights of the EFL Championship match between Reading and Huddersfield.

Danny Ward scored a hat-trick as Huddersfield boosted their Championship play-off hopes with a hard-earned 4-3 victory at relegation-threatened Reading.

In a frenetic first half, with five goals in the opening 25 minutes, Reading led early on through Lucas Joao only for Huddersfield to reply with efforts from Danel Sinani and Ward.

George Puscas made it 2-2, Ward restored Town's advantage, then Michael Morrison pounced just before the break to again level the scores.

Ward completed his treble, with his 10th goal of the season, eight minutes into the second half to seal the points as Town stretched their unbeaten run to nine matches, which includes a 2-1 win at Premier League Burnley in the FA Cup third round.

Huddersfield, who climbed into the top six with the win, were the first to threaten with Sinani seeing a shot blocked, but Reading went ahead in the fifth minute.

A superb break from Baba Rahman released Joao, who ran on to the pass before cleverly beating Town goalkeeper Lee Nicholls.

It was the Portuguese striker's first goal of the season - on his first start since August after recovering from hip and shoulder problems.

Huddersfield then went in front in the 15th minute as the Reading defence failed to clear and top scorer Ward slotted home.

John Swift found Puscas in acres of space and the Romania forward beat Nicholls with a precise cross-shot.

And the goals continued to flow in a frantic opening, with Town back in front in the 25th minute.

Sorba Thomas' hanging free-kick from the left was caught by Southwood - only for him to fumble the ball from his grasp as he fell to the ground.

Ward coolly guided in goal number nine for the season, with home appeals that Southwood had been fouled falling on deaf ears.

Thereafter followed a relative period of calm - until Reading made it 3-3 on the stroke of half time.

Swift's corner was nodded past Nicholls by home captain Morrison, with the aid of a deflection off Town defender Tom Lees.

In comparison, the second half started tamely but Ward was able to complete his hat-trick in the 53rd minute.

Reading's defensive frailty was once again exposed, with Ward picking up a loose ball and thundering it past Southwood from 25 yards out.

In the aftermath, Marko Mitrovic, Reading's assistant manager, was booked for protesting by referee Robert Jones.

Thomas could have made it 5-3, only to be denied by Southwood, but Huddersfield comfortably held on for victory despite late home pressure.

Reading's Veljko Paunovic: "I think that the start of the game was really good - but at the same time really bad. We were dominating the ball and feeling comfortable. We were finding free players and taking control. We did some really good moments in that first half, even if we didn't defend that well. We might not have attacked as well in the second half, but we defended better - and that was necessary to take the three points."

"Overall, it was a better performance from us than in the last few games in his horrible run. Generally, I think that we improved our condition. We were more aggressive from the beginning and much more determined at the start of the game. But, unfortunately, our problems in defence - as a whole team - were still there and still persisting. We have to look to minimise these individual mistakes. We have to eliminate this naivety that we have, we have to stop the bleeding.

"Again, though, the actual cohesion and the improvement we have seen in our team today was good. This was especially in attack, with Lucas Joao and George Puscas - supported by John Swift and the rest of the team. I think all that worked very well. And we will be looking to build on it. It has been a horrible month because we have had to compete against teams [without Covid issues] who are in a better shape than us."

Huddersfield's Carlos Corberan: "We have a lot of offensive mentality but we also need a little bit more meanness in defence. This is exactly the big challenge, the balance, for us. Not only for us but for every team in the world. In the first half, we attacked really well. But in the second half, we attacked worse but we defended better. Yes, it was a bit chaotic in the first half. That's because we had four defenders against their two strikers and it was too open.

"The spaces between the full-backs were also too open, allowing the strikers to find the space that they needed. I was thinking [at half time] that we needed to do something about that. We had to do something with our defence, otherwise we might have had the same problems in the second half."