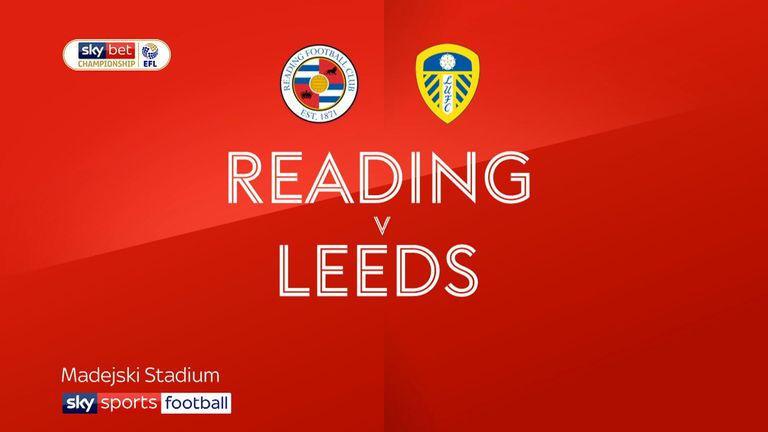 Highlights of the Sky Bet Championship clash between Reading and Leeds.

Two goals from Pablo Hernandez and one from Mateusz Klich helped Leeds return to the top of the Sky Bet Championship after a 3-0 win over Reading at the Madejski Stadium.

Klich rounded off a slick team move to settle Leeds' nerves after a frenetic start (14) and Hernandez tucked home via the post to strengthen the visitors' grip on their struggling opponents.

The Spaniard then scored the goal of the game with a thunderous effort from 20 yards (43), while Jose Gomes' relegation-threatened Royals struggled to test Kiko Casilla between the sticks for the Whites.

Leeds could be usurped at the top by Norwich on Wednesday evening while Reading remain just three points above the drop zone with nine games remaining.

Despite having a hotly-anticipated Yorkshire derby clash with Sheffield United on Saturday lunchtime - live on Sky - Marcelo Bielsa named an identical 18-man Leeds squad following Saturday's victory while Jose Gomes set up his side to strive for dominance in Berkshire.

As such, it was the Royals who forced the first shot on target, when Andy Yiadom stung Kiko Casilla's palms from close range, but as the visitors grew into the game, Klich soon plundered the opener.

Mo Barrow's ill-timed slide afforded Luke Ayling space to cross from the right-hand side of the area and Patrick Bamford dummied for the Polish midfielder to slot past goalkeeper Emiliano Martinez.

Within seven minutes, there was a second and Ayling - who later narrowly avoided being sent off for a second booking - was involved again, fizzing a pass to Hernandez, who confidently struck a second which ricocheted off the far post, before nestling in the back of the net.

Reading boss Jose Gomes made two changes from the side that secured a last-gasp 3-2 win against Wigan on Saturday, with Ovie Ejaria and Gareth McCleary replaced by Danny Loader and Ryan East, the latter of whom made his Championship debut.

Marcelo Bielsa, meanwhile, named an identical squad after their narrow 1-0 win away at Bristol City.

And two minutes before the break, the victory was all but sealed when the 33-year-old former Valencia winger bought himself a yard and scored his 10th of the season with a powerful effort.

Leeds could quite easily have scored several more in the final 15 minutes, when Patrick Bamford squandered three chances, and though Yiadom again tested Casilla, superior game management saw Leeds through after the break.

Man of the match - Pablo Hernandez

Quite simply, the 33-year-old was brilliant. Two very well-taken goals and his boundless energy rounded off a typically great performance, though a handful of spurned chances late on saw a hat-trick escape him.

Jose Gomes: "It was a very good game, a very good football match. We played against a very strong team, maybe one of the strongest in the league in the offensive dynamic.

"Leeds had very good movements with intensity and very fast movements between all their players. But the result doesn't show the performance that we have put in. We are not happy with the result, of course, we cannot be. But my players did a lot of positive things that we must catch for the future."

Marcelo Bielsa: "If you have a look at the table, you can only reach the conclusion that we still have many games to play. Taking this into account, we will have to win every game. At least we will try to win each game.

Reading face Stoke at the bet365 Stadium on Saturday at 3pm, while Leeds host Sheffield United on Saturday, live on Sky Sports Football from 12pm.